The acupuncture to quit smoking can serve, especially by reducing withdrawal symptoms, which makes it easier to support your symptoms.

The origins of acupuncture are in the Chinese medical tradition, and began to take place about four thousand years ago.

The best known technique is carried out using fine needles that are inserted at very specific points of the skin, being stimulated manually. 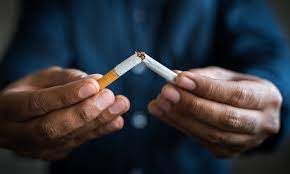 However, there are currently other variants, such as, for example, one which includes the stimulation of needles by an electric current, while they are inserted in the body.

Another variant – used in cases of smoking – is acupressure and consists of exerting pressure without inserting needles, but using granules or seeds that stick with tape at specific points of the body, especially in the ear – arthritis therapy.

Studies on acupuncture and smoking

In 1972, Dr. Went – a Hong Kong neurosurgeon – found that acupuncture had therapeutic effects on drug, tobacco, and other addictions.

These findings emerged from a study he carried out with the aim of using acupuncture anesthesia in patients who were about to undergo some surgery.

At the end of the intervention, some of the patients with some addiction reported a decreased desire to consume the substance to which they were addicted.

Following this result, Dr. Went focused his research on the curative power of acupuncture on opium and her0in addictions.

Another important work in relation to smoking was carried out by Lamont age, which separated a sample of patients into three groups:

After two weeks, a significant decrease in the number of cigarettes smoked in the first two groups was found compared to the control group.

However, this difference was not found in the follow-up performed after 2, 3 and 6 months from the end of the intervention, in none of the three groups.

In another interesting study, carried out by Kurume in 1986, several techniques combined with acupuncture were used to test its effect on smoking.

For this purpose, 518 chronic smokers who received a therapy with micro electric stimulation, transmitted through auricular pins applied at places where the vague nerve passed – transmitting the impulse directly to the brain – were used. Behavior modification therapy was used along with this electro acupuncture therapy, so that when the patient attempted to smoke or smell a cigarette, stimulation was transmitted through the inserted needles.

In patients with extreme anxiety, additional medications such as chlorazepam and alprazolam were used.

The results showed that 308 patients completely stopped smoking, 84 reduced the number of cigarettes consumed and 126 did not have a good response to the therapy.

The conclusion of this study to explain cases in which the combination therapy had not worked was that the reasons for quitting are complex because of the psychological and emotional factors that surround the patients.

Analyzing the results obtained in the studies that have been carried out to determine the action of acupuncture in smoking cessation, we find that it seems that acupuncture has a beneficial effect for this purpose.

The main objective of acupuncture is to reduce the symptoms of withdrawal, so that it is easier for the person to abandon the addiction. This objective is usually fulfilled, although the mechanisms of action that explain the phenomenon are not very clear.

However, it has also been found in repeated investigations that these are short-term effects, since acupuncture does not show the same effectiveness, avoiding that the ex-smokers resume the habit of smoking after 2 or 3 months from the end of the treatment.

Therefore, although this technique may be useful in the early stages of smoking cessation, it is recommended to use other types of therapies that will help perpetuate long-term effects.

If you have decided to quit smoking and are considering acupuncture to make it easier for you, you should consider the following aspects:

What are the bases of acupuncture?

The science or art of acupuncture is based on the theory that there are so-called due or Chinese spots on the skin and, acting on them, would achieve the therapeutic or anesthetic effect.

These points were delimited after thousands of years of medical experience, passing from one generation to another to complete the entire body map.

According to Chinese medicine , if we raise our arms, the lines of energy would be completely parallel, and distributed from the fingers of the hands  to the toes, being distributed all over the surface of the body.

To explain this phenomenon of the energetic lines of the body, the Chinese doctors of the time resorted to the fundamental primary energy, called I, which governs all things.

Within this energy, we can find two identical but opposite forms: Yang and Yin.

The first refers to the positive, like the sun, life, day, etc. The Yin, for its part, refers to the negative, such as the moon, the cold or the night.

The lines formed in the body would be composed of both types of energy, alternating the Yin and the Yang and, through the knowledge of the maps that form, can perform acupuncture effectively.

In the last 40 years acupuncture cases have been multiplied among Western physicians, increasing the number of translations, reproducing the techniques and verifying the results.

More specifically, it was in the 80’s of the last century when acupuncture began to have a growing influence in our country.

Many people who belonged to the health field became involved in the controversy that arose around this technique of alternative medicine: some criticizes it, others being attracted this alternative biomedical approach.

Also Read: Anticipatory Anxiety: 10 Tips to Cope with It

However, despite the criticism and rejection, it is undeniable that acupuncture has come to constitute a proposal that enjoys a great social reach today.

Some of the reasons that explain the growing interest in acupuncture in our society are, among others, the following:

Mechanisms of action of acupuncture

The main therapeutic use of acupuncture is, paradoxically, the relief of pain suffered in different parts of the body.

Some authors have postulated that this technique works thanks to the placebo effect, which causes in the person the desired effect due to their expectations of outcome – the patient experiences a decrease in pain or anxiety because he trusts that the technique works.

However, acupuncture has been carried out in small mammals and even in birds, obtaining an effect similar to that found in humans.

Therefore, it can be affirmed that it is a procedure with certain beneficial effects in the person who receives it.

In recent years, the possibility has been postulated that puncture with the needle provokes a chemical-electric stimulus that reaches the nerve centers of the medulla and encephalon.

There would arise a response mediated by chemical and hormonal neurotransmitters and, through the autonomic and endocrine systems could be the processes of relief or healing.

In addition, some theories affirm that the specific points in which the punctures are carried carry the message to specific points of the central nervous system, which in turn triggers anti-inflammatory effects, @nalgesic, tranquilizers and moderators on metabolism, such as:

However, these explanatory hypotheses have been refuted by other investigations, according to which acupuncture treatments do not change the levels of the substances in the organism nor act on the sympathetic nervous system, but their action is limited to the release of endorphins.

These endorphins would be responsible, in the case of smoking, to help patients to abandon addiction and to attenuate the withdrawal crisis.

The future of acupuncture

In order to ensure that acupuncture continues to be a useful and reachable alternative in our country, it is necessary that a new impulse is produced by those who practice it.

This impulse would be to emphasize practical knowledge, not just the theoretical one.

In fact, the main reason why this alternative medicine has not been well received from the start in Western society is that they are very different cultures from one another.

For example, while Westerners think that the body is a form of energy, Orientals feel that energy.

In addition, according to some testimonies of Western scholars who visited Taoist teachers, they were not very willing to pass on their knowledge, which has contributed to the lack of sufficient information on acupuncture.

Perhaps all these disadvantages have contributed to the fact that the practice of acupuncture in the West has not developed more rapidly and, if we want  to have greater acceptance in the future, we should be more open to the knowledge of a culture that perceives the world of one so  different from ours.