There are many people who combine antidepressants with alcohol , perhaps because they are unaware of the consequences they can have on their bodies. 15% of people with disorders of affective type (such as depression ) are dependent on alcohol.

It is not strange, because when someone suffers from symptoms of apathy and deep sadness, they tend to use alcohol as an escape route to feel better.

Another typical sign of depression is insomnia. Some people with depression may try to alleviate it with alcohol, since it has relaxing and sleeping effects. 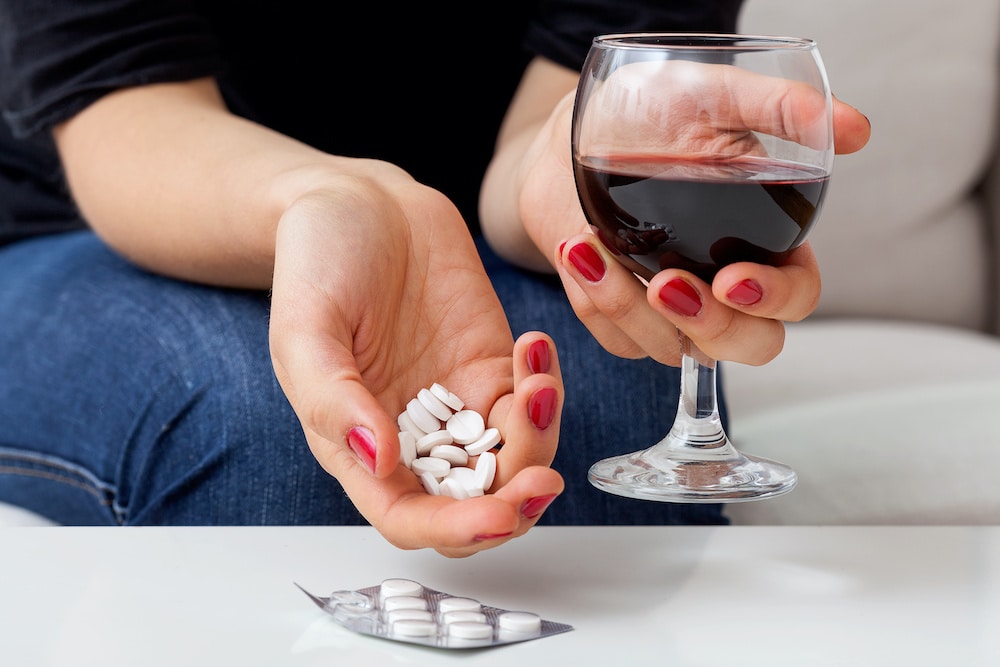 If they also start taking antidepressants, they may not give up their addiction to alcoholic beverages and combine all the substances at once.

Actually the exact effects of the mixture of alcohol and antidepressants are not known with absolute certainty. Some experts say that if alcohol is consumed in excess and then restricted, withdrawal symptoms appear.

This syndrome is characterized by a series of symptoms very similar to those of depression, and if we add that the individual is depressed the results can be devastating.

Likewise, intoxication by alcohol itself can cause feelings of depression after euphoria and relaxation.

Therefore, according to experts, it is best to avoid drinking alcohol whether you have depression or if you have already begun treatment with antidepressants.

Next, we will explain why antidepressants should not be mixed with alcohol and its possible consequences.

Interaction between alcohol and antidepressants

As mentioned, it is not known exactly what is the interaction between alcohol and antidepressants. Also because it may depend on the amount of alcohol consumed or the type of antidepressant used.

For example, the Selective Inhibitors of Serotonin Reuptake (SSRI) antidepressants cause the levels of serotonin, a neurotransmitter in our nervous system that is associated with feelings of well-being , to rise .

This is because depression is linked to low serotonin levels. If you want to know more about this topic, you can visit ” Low Serotonin: How does it affect depression? “

These antidepressants act by preventing serotonin from being reabsorbed again by the nerve cells that secrete them, thus increasing the available level of this substance.

On the other hand, alcohol also increases serotonin levels, but only temporarily. If a person takes antidepressants and alcohol, they are at risk of having too much serotonin in their brain; appearing serotonin syndrome.

This is characterized by restlessness, agitation, high blood pressure, muscle spasms and diarrhea. In the most serious cases, it can end up endangering life.

However, if alcohol consumption is chronic and prolonged, it can lead to low levels of serotonin. This happens because our body is dynamic and tends to adapt to psychoactive substances, a phenomenon called habituation.

Thus, when you get used to alcohol, depressive symptoms appear because the available serotonin decreases. If you also take antidepressants, the result will be that they will have no effect on our nervous system.

You may feel more depressed or anxious

Consuming alcohol can counteract the beneficial effects of antidepressants, generating greater difficulty in the treatment of symptoms.

Despite the general belief that alcohol seems to improve our mood, this effect is only in the short term. The result that is obtained in a general way is the increase of the symptoms of depression and anxiety.

Side effects can be worse if you also take another medication

Many medications can cause problems if taken together with alcohol, this includes  anxiolytics, sleeping pills or  painkillers.

This triple combination (antidepressants + other medications + alcohol) involves an increase in the severity of side effects such as: nausea, insomnia, drowsiness, diarrhea … Even reaching, in the worst cases, to cause liver damage, heart problems , internal bleeding or increased blood pressure.

It affects your thinking and alertness or vigilance

It is commonly known that alcohol affects coordination, thinking and reaction times.

If you combine these two substances, these effects will be amplified to a greater extent than if you only consume alcohol with more risk or making it more difficult to perform tasks that require attention, concentration and precision.

For example, if you drive heavy machinery and your reaction and coordination times are affected, you are more likely to have an accident or make people around you at risk.

It can have sedative effects

Some antidepressants produce drowsiness, just as it is known that alcohol produces this same effect.

Therefore, when both substances are taken together they can intensify this effect, the risks being much greater.

For example, if you drive there is a greater risk that you will suffer a car accident. This happens when you lose attention, concentration and precision due to the sedative effects. Many accidents occur when the driver falls asleep unknowingly due to the combination of these substances.

In the worst case, this combination can cause death. The consumption of alcohol can lead to an increase in serotonin temporarily.

If you also take antidepressants (whose effect is that there is more serotonin in the brain), the result you get is an excessive level of serotonin. This can cause the serotonin  syndrome or serotonin syndrome, already mentioned.

The most severe symptoms of this syndrome are high fever, epileptic seizures, irregular heartbeats and unconsciousness, which can cause death.

On the other hand, a study by Cheeta et al. (2004) found that the combination of alcohol and antidepressants increases the probability of death.

This is because the intoxication produced by the mixture of both increases the suicidal behaviors (violent behavior, mania and aggression).

First, antidepressant medications have such behaviors as a side effect. It happens that, in a state of depression, patients have suicidal ideas, but do not dare to carry them out because of their immense apathy.

However, antidepressants take him out of that state, making them feel more active. For this reason it is important to go to psychological therapy when taking antidepressants.

Therefore, this side effect of antidepressants coupled with the typical effect of disinhibition of alcohol (such as euphoria, false self-confidence …), makes it easier for the person to “dare” to commit suicide or perform self-injurious behaviors.

In fact, these same authors point out that 80% of the deaths caused by antidepressants were suicides.

As we mentioned, depression and alcoholism have an important link.

In alcoholic patients there is usually a high incidence of depressive syndromes, as well as, people with depression tend to consume alcohol and other drugs as a therapeutic remedy. So it is not surprising that they become addicted.

When there is depression and an addiction to alcohol or other drugs at the same time, it is called dual pathology. In many detoxification or drug rehabilitation clinics, therapies are carried out that treat both problems together for an integral recovery of the person.

Therefore, it is recommended in these cases a process of total alcohol detoxification, without substitutes.

Once the period of detoxification is over, various aspects of the person will be worked on little by little to strengthen their coping skills such as social skills, fight phobias, increase their self-esteem, etc.

At this time it will be necessary to strictly follow the medication with the antidepressants indicated by the professional.

In these patients, group therapy, intervention with relatives and partners, as well as individual cognitive-behavioral therapy are also commonly used.

Due to the dangerous consequences of the simultaneous consumption of these two substances (or combined with other medications), it is advisable to consult a health specialist about the side effects of antidepressants.

Before a treatment with this type of medication, it is important that the specialist take into account whether or not other medications are consumed, the medical history, or whether there is alcohol addiction or not.

Depending on each case and the type of antidepressant or its dose level, the doctor may occasionally allow alcohol to be consumed in low doses or restrict it completely.

Also Read: People with Depression: The 18 Most Representative Characteristics

On the other hand, it is convenient to read the leaflets of the medicines to know the effects they can produce and in which cases they can be consumed, as well as to consult all the doubts with the specialized doctor.