The Anxiety Dizziness are one of the most typical symptoms that appear when we experience high sensations of this disorder.

However, dizziness can also be a source of anxiety, so when these symptoms appear the body can respond with more anxiogenic sensations.

This fact shows that the relationship between dizziness and anxiety is very close and, furthermore, it is not based on a simple unidirectional relationship, but that both alterations can be mutually feedback.

The reason why the symptoms and anxiety are so linked lies in the vestibular system, an ear device that is related to both balance and spatial control.

This system consists of two extensions: the utricle and the saccule, and both are responsible for reporting the position of the head in relation to the floor, so when alterations occur in this region you can experience dizziness easily.

The vestibular system consists of an inner ear on each side, so they constitute specific areas of the brain and the nerves that connect them.

Likewise, this device is closely related to the brain areas responsible for the brain, so the interaction between these two body regions causes dizziness-anxiety interaction.

The dizziness that accompanies anxiety is often described as a sense of daze or bewilderment.

This sensation is usually slightly different from the sensation of a “normal” dizziness in which the sensations of vertigo or body discomfort can be more noticeable.

Likewise, in dizziness due to anxiety there may be a sensation of movement or that turns the head inside more than in the environment.

Sometimes a slight swaying sensation appears even when one is standing, so certain spaces such as shops, full shopping centers or wide open spaces can cause a sense of imbalance.

We must bear in mind that when people make an anxiety response, not only thoughts of nervousness invade us, but our whole body responds in an anxious way.

In this way, the brain is responsible for activating the entire organism when it detects a dangerous or anxious situation.

These symptoms are easily recognized as responses of the body to a situation of anxiety, because when we are nervous the body can take a form characterized by these sensations.

Dizziness appears in a similar way. When we are anxious, both our brain and our body modifies its functioning, so that highly unpleasant sensations can appear.

Thus, the physiological changes of the brain also affect other regions, and the vestibular system is usually one of the most sensitive in these situations, a fact that explains the onset of dizziness.

In fact, certain investigations show how, in situations of anxiety, the vestibular system is affected in practically all cases.

However, sometimes the alteration of this region of the inner ear does not translate into a feeling of dizziness.

In this way, anxiety dizziness is understood as a response of the organism to a certain physiological activation caused by an anxious state.

In addition, as we commented at the beginning, the relationship between the brain regions that control anxiety and the vestibular system (device that controls dizziness) is bidirectional, so that just as anxiety can induce dizziness, dizziness can induce anxiety .

Normally the most notorious relationship is the one that we expose in this article, that is, anxiety as a generator of dizziness. 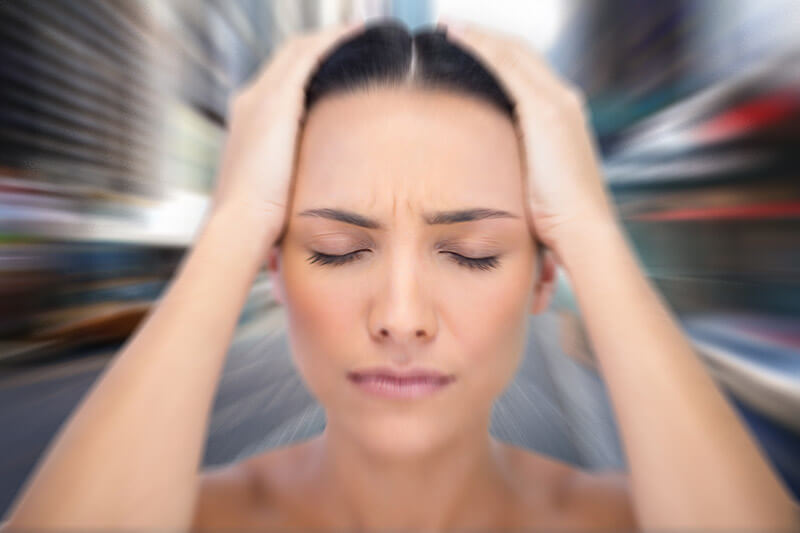 The main factor: the interpretation of the brain

However, the main factor that maintains anxiety states is the brain’s interpretation of the anxious state of the body.

In this way, if we over-activate the organism, tense muscles or hyperventilate, the brain can interpret these symptoms as anxious and respond with a state of anxiety.

The same happens with dizziness. That is, as dizziness is a typical symptom of anxiety, the brain can interpret it as such and respond with thoughts of nervousness.

To simplify the explanation, the brain could function in these terms;

“As the vestibular system is performing a typical operation of anxiety (dizziness) perhaps I am in a situation of danger and should make an anxiety response.”

Obviously, as dizziness is not the only physical symptom of anxiety (there are many more) a simple dizziness does not usually cause a state of anxiety.

However, if the dizziness appears in an anxious context, that is to say, one is already nervous before its appearance and other physical symptoms of anxiety appear, it can cause a greater anxiety sensation.

Anxiety dizziness is usually persistent over time and, although in some cases it has a brief appearance, it can manifest itself for days and weeks in an interrupted manner.

In these cases, some people feel that the sensation they experience may be better described by the word instability than dizziness.

In any case, it is very likely that before these sensations what is happening is a dizziness anxiety that appears through the mechanisms explained in the previous section.

These symptoms are usually very annoying and the people who experience it can have the perception of oscillation (without getting to feel that everything revolves) in a persistent and continuous way.

Likewise, this type of dizziness usually makes it difficult to fix the gaze and, at times, can precipitate the feeling that it is the beginning of something worse (falling, passing out, having a serious illness, etc.).

Thus, dizziness can generate even more anxiety and nervousness when thinking in these terms.

This fact is highly negative since the person can enter a loop that costs him a lot to leave.

The feeling of dizziness can cause negative thoughts that cause anxiety, but what is more important is that dizziness is caused by anxiety itself, so if dizziness increases nervousness, dizziness will also increase and a difficult vicious cycle will form to overcome.

Faced with these situations, the first thing that must be done, or rather, to know and be aware, is that anxiety dizziness is not dangerous.

When anxiety is the cause of dizziness, there is little to worry about because in these cases, the sensation of instability and dizziness does not indicate a serious physical problem or a malfunction of the brain.

In fact, the only thing that indicates these symptoms is a state of anxiety, that is, it is a sign that you are nervous.

So, to be able to end this symptom more than annoying what you have to intervene and reduce is the anxiety, since the dizziness will not disappear while there are high levels of nervousness.

However, if it is possible to reduce or even eliminate the state of anxiety, the feeling of dizziness will disappear automatically.

How should it be treated?

Likewise, we have also seen how anxiety dizziness per se is not dangerous, so the appearance of these symptoms should not cause excessive alarm.

However, dizziness and dizziness are symptoms that can scare and limit people’s daily lives.

Likewise, dizziness is an inexhaustible source of discomfort, decreases the quality of life and increases suffering.

In addition, we must bear in mind that although dizziness is not dangerous in itself, it can have negative consequences, as they can increase anxiety and be the trigger of a panic attack.

For all this and because nobody wants to live with dizziness and dizziness, it is important that these symptoms are treated properly when they appear.

The first requirement to deal with this type of problem is based on performing a medical examination that discards any other health problem that may originate or be involved in dizziness.

Once this fact has been ruled out, you can begin to treat dizziness through anxiety interventions through psychotherapy.

The objective of psychological therapy will not focus on reducing dizziness, but will be based on reducing anxiety, since when the anxious state disappears, dizziness will also disappear.

Thus, anxiety dizziness is treated through psychological techniques for anxiety.

Nowadays there are many treatments that are effective in reducing anxiety levels. The relaxation training, exposure, cognitive therapy or problem solving are some examples.

Detection and coping technique of the dreaded consequence (DACT)

However, in order not to review the psychological techniques for anxiety, which could be excessively long, I will discuss a psychological strategy that is especially effective in treating this type of case.

This is the detection and coping technique of the dreaded consequence (DACT), a psychological strategy that allows detecting the sources of discomfort and finding solutions that reduce emotional and physical symptoms.

The technique is based on the fact that anxiety generates feelings and feelings of discomfort: overwhelm, nervousness, blockage, etc.

However, this malaise is only one symptom (or several) of anxiety, so the really relevant is not the discomfort itself, but the feeling of doubt or uncertainty to which it is associated.

In this way, a person may be overwhelmed or worried about dizziness that he frequently experiences. This would be your discomfort.

However, if we think about what are the reasons for this feeling of discomfort may appear doubts or uncertainties.

“I’m worried because dizziness can indicate that I’m sick, it could be a sign that something is going wrong in my head, that I have a mental disorder, that I will lose my job because of dizziness or that everything will go wrong from now on. “

These approaches that can be made by anyone suffering from anxiety dizziness would be the second point, that is, the uncertainty, which is the cause of the discomfort.

Once this point is reached, you should start looking for solutions.

These solutions can be of thought (look for alternative thoughts to those that generate discomfort) or of behavior (look for activities that allow to eliminate those thoughts).

In cases of anxiety dizziness in which the fear of dizziness is the only source of nervousness, the search for thought solutions can be as simple as being well informed about the nature of dizziness, awareness that what is suffering is anxiety and rationalize to the point of not fearing such dizziness.

If this does not work, you can use the search for behavior solutions, which can be based on a simple relaxation exercise.

If the person is able to acquire a state of corporal relaxation, he will notice how his dizziness disappears, so he will begin to live and to understand in first person the relationship between anxiety and dizziness.

In more complicated cases, that is, in more serious anxiety problems, the person may not be able to perform this exercise on its own, so a psychotherapist is required to apply this psychological technique.

In these cases, the therapist must investigate the aspects that the person is not able to face and perform a cognitive restructuring that allows to overcome fears and anxieties.