There are several symptoms of autism in children -some are in babies- that allow the diagnosis of the disorder properly. They are observable characteristics that occur at an early age.

One of the biggest concerns that both a mother and a father can have is whether their child is healthy or not. For that, we have to know how to identify the signs that can serve as an alert, in order to detect it in time and thus act quickly.

According to my professional experience with these people and their families, identifying and assuming that our child has autism may seem quite complicated. Sometimes we have the answers in front of ourselves and we do not realize or better said, we do not want to realize since we usually look for explanations to everything that makes it different from the rest.

This way of dealing with this problem is usually a defense mechanism by the parents to downplay and internalize once again, that your child does not present any problems.

Next we will present the 15 main characteristics that a person with autism spectrum disorder presents :

I have dealt with many people who have this disorder and rarely when I have called them have they looked me in the face and much less in the eyes.

They do not show any sign of attention to your call, as if it were not with them or as if you did not speak their language. They continue with their gaze fixed on what catches their attention.

2- They do not point objects

I have not seen that at some point they pointed out objects that caught their attention, however if it is true that sometimes they stared at them or even approached to touch them.

3- They do not use their imagination when they play

Children with this disorder are not able to imagine situations like any other child, it is something that exceeds them and that they do not get to understand very well. Sometimes this can cause stress and lead to aggressive behavior.

They never look in the eyes and if they do, they avoid it immediately. For family members and caregivers at the beginning it can be complicated to understand and gives rise to feelings of discomfort and guilt.

They also prefer to be alone and even if you try to relate or be part of their class group, all effort is in vain because these people are not going to do anything for it. It is as if being in contact with others bothers them and they adore tranquility.

A child who does not have this disorder if he feels bad cries and if he is happy he smiles. On the other hand, people with autism could be said to be a separate world since they always have a serious expression and you never know if they are okay or if they feel bad.

From my experience, the only thing that made me see that they had a bad day was that they were nervous or showed aggressive behavior towards themselves, even going so far as to hit and scream desperately. Over time I understood that some of the only means they find to communicate is through these behaviors.

Another thing that caught my attention was that they did not know how to identify any emotion either in photos or in the face of another person, not even those that can be easier such as happiness or sadness. 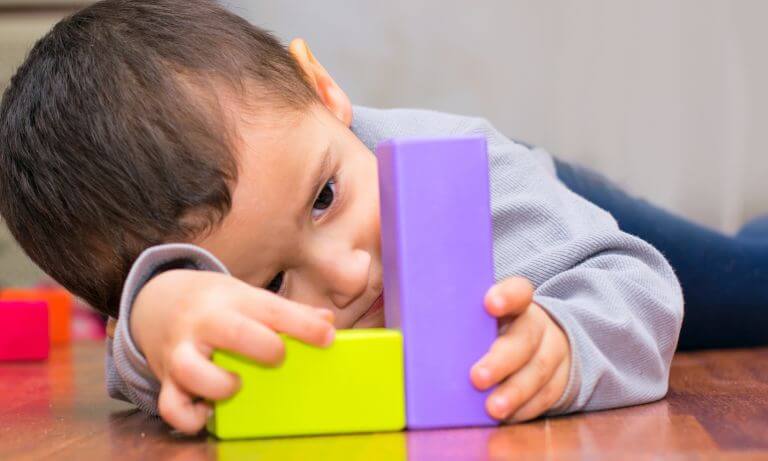 Most people with autism have problems in language and speech development, as they may have problems associated with this disorder. It is true that as with the other symptoms, everything depends on the degree and the person who has autism.

During my professional career, I had the opportunity to work with people who were not able to communicate through speech while others needed help with pictograms, or on the contrary they had poor but sufficient language to reach basic communication and understanding. .

7- Can repeat words or phrases

These people can get to have some kind of fixation by words or phrases that do not make any sense. They simply repeat them without control, maybe because they like their sound or because “it makes them funny” even if they are not aware.

Some examples of words I have heard in my students have been: butane, eta, beautiful … Regarding phrases I have not found anyone to repeat them, although with the words I think we can make an idea.

8- Respond without meaning to the questions we ask

Sometimes, when you ask those people who have the ability to speak to communicate they can respond to something that has nothing to do with what you are asking.

This can be for several reasons, the first is that you have not understood the question that you have asked for being too abstract or long. One tip is to adapt to the capacity you have. At other times, they are not even able to have a basic communication with you so you can ask them what they have eaten and they will respond to you, for example.

9- He is nervous or aggressive if he skips his routine

People who have this disorder usually have stress or feel discomfort when they change their routine, because they do not have the necessary tools to deal with these changes.

Something as simple as changing the schedule of a subject can unbalance your mind and therefore lead to aggressive attacks. For example, a child who took care of the days when it was raining or bad weather became nervous and even stuck. He did not accept that there were days that were not sunny since that brought him a consequence, not going for a walk with his parents.

Some children may have fixation by objects or different themes throughout their development that even people who do not have this disorder have trouble understanding. I have come to know children who adored paper rolls and therefore needed to have all types of rolls in the world.

When they saw someone in a bar with someone, they got nervous and those who could would take it away. Others, however, were obsessed with order and spent the day ordering their toys to the point of knowing the placement of each object.

11- Moves in circles, flutters with your hands or moves your body back and forth whether you are sitting or standing

This is another sign that can indicate that our child has autism. These are movements that usually characterize people who have this disorder.

They usually do them all day long or when they are nervous or upset, either by a change in their routine or simply because they have not slept well.

12- They can react negatively or strangely to how they sound, smell, feel, know or see the things that surround them

This usually happens when they leave places they visit often and enter a new one they do not know or where they have never been. It is related to routine habits because as we mentioned above, it creates tension and discomfort not respecting it.

This also happens to children who do not have this disorder because they may miss the place where they are and at first they may become afraid.

13- Reject without apparent explanation some people

Either because they simply have not “liked” that person or because they did not like the way they were dressed that day, some people with autism tend to refuse without apparent explanation to other people.

In my case I had a student who could not be in the same room or near another classmate. There had never been any problem with either of them or they had argued, simply for reasons that only he knew could not be close to him.

14- They have a fixation by someone in particular

It can happen on occasions that they have a fixation or preference for being with someone from their environment more than with others. Sometimes this can be a problem for the family, because if you opt for a member of the family will not participate equally at home and if you do not follow their rules can be aggressive.

At other times you may even be jealous if you get too close to the person you have chosen, becoming a problem for your day to day.

In my case a person with autism came to have this feeling for me, at first I found something surprising and I was very good as his behavior changed with me and he did the exercises that he sent and even smiled, even if he did not know what what that meant

However, it soon became a problem because I did not let him approach other classmates showing their displeasure with aggressive behaviors such as self-harm or screaming towards me.

All children like to be hugged, kissed and pampered. However, for some people with autism this can be a great ordeal. Without realizing it, we may be forcing our son to hug us and kiss us, as with other signs we have presented previously, this can create anxiety and discomfort.

Although we know the main characteristics of people with autism, many times we still do not realize that our child may have this disorder.

Next, we present in table form and as a summary the possible differences that may exist between children who present it and not in the different fields of development:

What aspects do we have to take into account?

The family as the main socializing agent has the duty to detect these first symptoms in their children. The problem is that sometimes, they do not usually realize because they see their behavior as normal or do not pay attention.

As parents we must be attentive to the development of our child in order to identify possible signs of a disorder. This will make it act more efficiently and more efficiently for the early detection in this case, of autism.

Also Read: What is Solomon Syndrome? 7 Guidelines to Combat It

If this is done properly, we will have improved the life of our son since he will be able to receive the necessary attention at the appropriate time, so he will be able to advance and improve more quickly in what he needs with the help of professionals.