Behavioral Problems in Children, elementary school children, preschool and generally in childhood are due in many cases children receive more attention – and more reforzamiento- when they misbehave when they act appropriately.

In order for psycho educational treatment in the child and adolescent population to be successful, parents should be fully involved in modifying these behaviors, since children act according to the context in which they are found.

This is a very common problem in children, which you have probably experienced on numerous occasions. 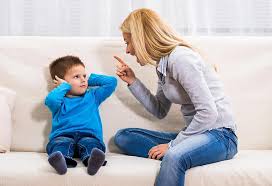 The children’s tantrums, loud and sudden cries and cries are a source of discomfort for parents and, in many cases, children manage to get away with it by acting in this way.

It is considered normal when it is manifested between 2 and 3 years, being less frequent in later ages.

It is even more annoying for parents when tantrums occur in crowded places-such as a restaurant, a mall, a grocery store, etc.-since they annoy the people around.

On these occasions, parents are much more likely to give in to the children’s requests to prevent an even greater tantrum from being made public.

If you want to reduce the number of tantrums, you should follow the following instructions to modify your child’s behavior:

First of all, you should know that the best thing to do in these cases is to withdraw your child’s attention.

This is called “extinction technique”, since the aim is to extinguish or eliminate certain behaviors of the child.

To carry out this technique, you must be willing to endure a first moment of even greater tantrums.

Think that your son is accustomed to get his way after a few minutes, so if you are not working for hours, he will have the so-called “outbreak of extinction”.

It is also important that you begin by clearly explaining to your child what is going to happen from now on, which would be something like this (if you are 6):

“Well, you’re 6 years old and you’re a big boy, so from now on I will not listen to you when you scream, cry or palates. If you want something, you have to ask for it and talk like a 6-year-old. “

If the child has been attentive and listened to your explanation, you will be able to understand it. Therefore, do not repeat the instructions over and over again – since that way, you would be paying attention.

At first, the child may think that you will give in some time and that will end up depleting your patience as has happened on other occasions.

Therefore, to take your instructions seriously, it is important that you prove that it will not happen, that you will not listen to him no matter how much you shout.

If your temper tantrums occur on the street, on the way to school, simply take him by the hand and accompany him to the center, without reacting to his attitude.

Do not shout or lose control of the situation. Stay calm and be consistent with the explanation you have given your child.

The moment you calm down and start talking in a calm way, try and reinforce this behavior.

As we said at the beginning of this article, the main cause of behavioral problems in children is that they tend to get more attention when they misbehave than when they act the right way.

It is also important that you comment on the usual caregivers of your child (grandparents, nanny, etc.) how they should act with them, so that you have a consistent attitude and the child can generalize their behavior.

Children who have aggressive behavior consistently cause their parents a lot of discomfort because they perceive that they cannot dominate their child and control their behavior.

As Javier Urara, author of the book “The Little Dictator “, says, they are children who “do not tolerate failures, do not accept frustration. They blame others for the consequences of their actions, “etc.

Little by little, these children are taking control of the people around them, doing what they want and with the certainty that their parents will not oppose them.

As you can see, this is a problem that is getting worse over time, so it should start to be treated as soon as possible.

The smaller the child, the more moldable it is and the easier it will be to end this problem.

Therefore, if your child has an aggressive attitude, such as the one we are describing, you should carry out the following methods:

It is advisable to have a control of the children with whom your child relates and make him spend less time with them if necessary.

Here you should also emphasize the series, movies or video games for which your son shows interest. The media can lead to violent behavior.

The acquisition of sphincter control occurs at different ages, depending on the child in question.

Usually, these ages oscillate between the 2 and the 6 years, first taking control of the poach and soon that of the urine.

Sometimes, children control pee during the day but have retention problems at night, to a later age.

If your child has difficulty with sphincter control, the first thing you should do is consult a specialist doctor who discards physiological problems.

It is a common mistake to try to start a psychological therapy without having to go to the doctor in the first place.

If medical problems are ruled out, several different methods can be initiated:

If you wake him up between 10-15 minutes before he pees on the bed, you can go to the bathroom and prevent this from happening.

To sound an alarm when it is detected that the child is wetting the bed.

Therefore, the child wakes up and may interrupt the episode and prevent incontinence. We recommend this method if your child develops incontinence frequently (by consulting with a specialist).

You may have experienced frustration with your child because you did not spend as much time in the studio as you would like.

Many parents have the same feeling today, since we live in a highly competitive society that attaches great importance to academic results – at the expense of effort.

Another frequent problem is to think that children should not be rewarded for doing their duty, since it is considered a form of “blackmail “.

However, you should keep in mind that children do not yet understand the importance of studying, so they will not be motivated if they do not get awards or short-term rewards.

If you want to increase your child’s motivation in the study, he / she establish a series of daily, weekly and quarterly rewards.

For example: “If you spend 2 hours a day at school, you can choose between:

As you can see in this example, several prizes are offered, to avoid satiation.

It is also important that the time of the activity is established previously, so that there is no confusion or conflict when interrupting the prize.

Like you can do with quarterly awards, where you can offer your child / s excursions, visits to an amusement park, weekend trips, etc.

The important thing here is that you adapt to your interests and look for ways to strengthen your effort in the study.

In this way, just as adults work to get economic enhancer – the salary – children will work to get what they care about.

The shyness in children does not cause as much concern for their parents as the problems described above, since they do not alter the family dynamics and are not often cause for conflict.

In fact, many children have been classified as shy since childhood and have not been given any attention to this problem.

Nowadays, the interest for this type of children is increasing, since it is demonstrated that the children with suitable social skills will have a better academic, social and familiar development.

Here are some specific tips for applying if your child is especially shy and think you may create relationship problems with others:

Greet the people of the establishments you go to, have small conversations with neighbors and acquaintances, etc. This will help your child have

A good reference model to imitate.

If you want to imitate the behavior of other more sociable kids, try to praise them saying: “how nice, how kind is that child who has come to greet us.”

In this way, you are not telling your son how bad he is related, but how well another does it.

At first, encourage him to perform simple behaviors such as saying goodbye to others by hand, or greet when you arrive at a place giving good morning.

Reinforce these behaviors by telling him how well you have done it, and do not pressure him when you find him uncomfortable in some situation.

Little by little, you can be more demanding with the behaviors you ask, like telling him to order the refreshment he wants from the waiter directly.

Remember that it is very important that you pay adequate attention to your children and the behavior they present, since the earlier the problem is detected; the easier it will be to remedy it.