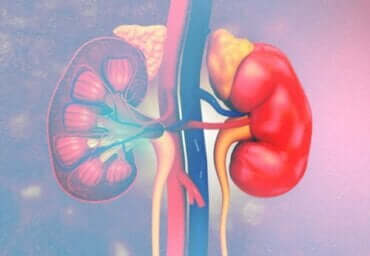 The CAH or CAH ( ” Congenital adrenal hiperplasi to” in English) belongs to the group of autosomal recessive diseases from genetic mutations.

Specifically, enzymes involved in the production of glucocorticoids, mineralocorticoids or sex steroids are altered by the action of the adrenal glands. (Warrell, 2005). That is, a mutation or deletion of any gene that encodes enzymes that synthesize cortisol or aldosterone gives rise to this disease. (Wilson, 2015).

Mainly, this disease will cause an excess or defect in the production of abnormal sex steroids.

For this reason, the person with congenital adrenal hyperplasia will show an altered development of primary and secondary sexual characteristics. (Milunsky, 2010). The phenotype will depend on the sex of the subject and the severity of the mutation. (Wilson, 2015).

What are the adrenal glands?

They are small organs that are located just above the kidneys. Its function is to produce hormones that are fundamental for the proper functioning of the organism (Spanish Society of Pediatric Endocrinology), such as sex hormones or cortisol. The latter is important to respond to stress and other functions.

What types are there?

This disease presents numerous variations according to the sex and the affected genes. Therefore, there are different ways to classify it.

The most common classification includes alterations in the levels of different enzymes:

– Congenital Adrenal Hyperplasia 21-hydroxylase , which is the most frequent. In turn, it can be divided clinically into 3 phenotypes: salt loss, simple virilizing, and non-classical. (Wilson, 2015).

It can also be classified according to the moment in which the symptoms appear, which may be:

– Classical : if the symptoms are already expressed in the newborn.

– Non-classical : if symptoms occur in more advanced stages of life, such as puberty. According to the Spanish Society of Pediatric Endocrinology, within this type can be given a less serious form called “cryptic form”. It refers to cases that are detected by a family study, examining parents or siblings who already have this disease. In cryptic cases there are also enzymatic alterations that are normally overlooked due to the absence or slightness of symptomatic expression.

What is its prevalence?

Classic adrenal hyperplasia occurs in 1 of every 13,000 to 1 of every 15,000 live births in the world. Specifically, the non-classical subtype of 21-hydroxylase deficiency is the most common, being considered the most frequent autosomal recessive disease in humans.

It should be noted that the frequency of subtypes of congenital adrenal hyperplasia depends on certain populations and has a high ethnic specificity. (New, 2013).

Regarding sex, men and women suffer from this disease with the same frequency. However, according to the accumulation of precursor hormones or the synthesis of testosterone related to each sex, phenotypic manifestations will vary between women and men (Wilson, 2015).

What are your causes?

It seems that in congenital adrenal hyperplasia there is a decrease in the release of cortisol, aldosterone or both (Wilson, 2015). It is known that the lack of cortisol increases the secretion of ACTH (or corticotropin, a hormone that stimulates the growth of the adrenal cortex). (New, 2013).

Two copies of an abnormal gene are needed for this disease to arise, and it is important to note that not all partial deletions or mutations originate it. (Wilson, 2015)

It is important to mention that the clinical phenotype will change depending on where the enzyme deficiency is, the accumulation of precursor hormones, the production of said hormones and their physiological action when the enzymes do not work correctly (Speiser, 2015).

What signs and symptoms do you have?

The signs of congenital adrenal hyperplasia can be manifested as early as birth and vary according to the subtype.

– In the case of classical virilizing adrenal hyperplasia, masculinized genitalia are found with anomalies such as: complete or partial fusion of the labioscrotal folds, phallic urethra or clitoromegaly.

– If the deficiency of 21-hydroxylase is milder, the symptoms are seen in late childhood and would consist of accelerated skeletal growth and maturation, early onset of pubic hair and clitoromegaly. This type would be called Simple Virilizing Adrenal Hyperplasia.

– Another less serious type begins to reveal in adolescence or early adulthood. It is identified by oligomenorrhea (delayed menstruation), hirsutism (excessive appearance of hair) and / or infertility (non-classical adrenal hyperplasia).

– On the other hand, if there is a deficiency of the enzyme 17-hydroxylase; the phenotype is female at birth, but in adolescence, menstruation does not appear and the breasts do not develop. Hypertension is frequent here.

– They can show (especially in the virilizing form) socially considered interests of the male gender.

– Men develop male genitalia in most cases. Although there is a deficiency in the androgenic regulation of 3-beta-hydroxysteroid dehydrogenase (3β-HSD) or 17-hydroxylase, ambiguous or feminized genitalia may be present. In these cases, it is common to be educated as if they were girls and to go to the doctor after several years for lack of breast growth or hypertension.

– In the most severe cases, it can be observed between the first and fourth week after birth delayed development, vomiting, dehydration, hypotension, hyponatremia (low sodium level), hyperkalemia (high potassium level in blood) that agrees with the diagnosis of salt-losing classical adrenal hyperplasia. 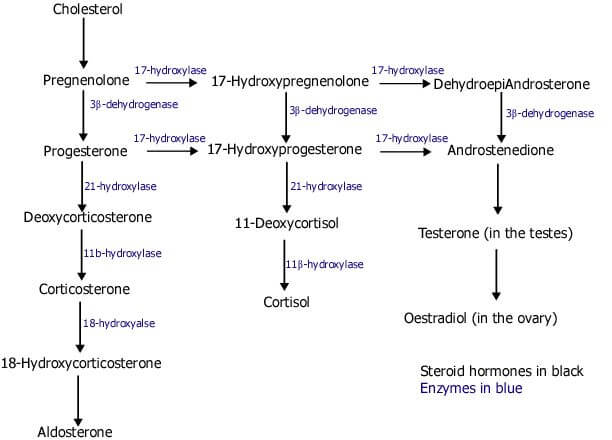 Other general symptoms of the classic and non-classical type (Kivi and Rogers, 2016)

What complications can occur?

In classic congenital adrenal hyperplasia a complication called “adrenal crisis” can occur, which means that the adrenal glands do not produce enough cortisol.

This condition must be attended to immediately. It is necessary to clarify that it usually occurs in children and it does not happen in adults with the non-classic subtype.

Its signs and symptoms would be the following:

– Diarrhea.
– Vomiting.
– Dehydration.
– Low levels of sugar and sodium in the blood.
– Shock.

How is it detected?

Over time, the methods have been changing in order to improve the predictive value of these tests and detect the disease more accurately.

For example, there are some screening programs in which a blood test is performed after several weeks. In this way, they make sure to diagnose cases that have been overlooked.

Due to these advances, child mortality has significantly improved; all thanks to the improvement of an early diagnosis (which will allow the treatment to begin as soon as possible).

– In most developed countries, all newborns undergo a heel test to detect 21-hydroxylase deficiency and other disorders.

– Immunoassays are also used, which are useful for detecting 17-hydroxyprogesterone.

– An approximation can be made to the diagnosis of this disorder in the fetus in the second trimester of pregnancy. For this, amniotic fluid hormone levels are measured (Kivi and Rogers, 2016).

– Genotyping of fetal DNA in maternal serum: it consists of detecting before the 7th week of pregnancy a possible case of congenital adrenal hyperplasia to start treatment as soon as possible (Spanish Society of Pediatric Endocrinology). So far it has not been considered profitable and does not fall within the diagnostic routine (Speiser, 2015).

How is the forecast?

According to Wilson (2005), if the correct medical and / or surgical treatment is received, the prognosis can be good.

However, psychological problems usually prevail that need to be addressed, since these people may feel dissatisfied due to the usual genital abnormalities in some types of congenital adrenal hyperplasia.

In addition, difficulties may arise in terms of gender identity because some of these young patients tend to be raised according to a gender in which they feel they do not fit.

It is important in this case to provide adequate psychological, medical and surgical support; In addition to offering enough information to understand the disease and make the right decisions.

People with adrenal hyperplasia usually have a low fertility and fertility compared to those without this disease (Speiser, 2015), although with an adequate metabolic control can be improved.

Premature death may occur in some cases if the required doses of glucocorticoids are not administered at key times.

For all these reasons, the quality of life of patients with this condition has been classified as suboptimal to poor, although methods are currently being developed to continue to improve the well-being of these people.

Congenital adrenal hyperplasia is chronic and accompanies the person throughout life. The main goal of treatment in its classic form is to decrease the excess production of adrenal androgens and replace the deficiency of cortisol and aldosterone.

This is to prevent adrenal insufficiency and virilization, mainly through oral drugs composed of mineralocorticoids, glucocorticoids and salt supplements.

It is essential for proper treatment to perform annual x-rays (see if growth is appropriate) and to monitor the levels of electrolytes, adrenal steroids and plasma renin activity.

– Medication : it is the most common form of treatment, based on a daily hormonal replacement. This reduces the symptoms and regulates the hormonal levels. It may be necessary to use more than one type of drug or use high doses for the treatment of the patient, especially when they become ill, undergo surgery or are under excessive stress. It is possible that patients with the nonclassic subtype do not need treatment, since their symptoms are not so evident.

Hydrocortisone is commonly used, which is administered two or three times a day (Speiser, 2015).

– Surgery : you can choose a surgical method called “feminizing genitoplasty” for girls from 2 to 6 months, which aims to change the functioning and appearance of their genitals. It may be necessary to repeat this operation after puberty. According to one study (Crouch et al., 2004), women who had undergone this intervention are more prone to loss of clitoral sensitivity or to dyspareunia (pain during intercourse)

– Psychological and emotional support : since it is usual to have insecurities regarding physical appearance and to worry about sexual and reproductive life. Important to ask for psychological help, being useful to consider participating in a support group with people who are in similar conditions.

– It has been suggested to treat pregnant women who carry a fetus with this disease through pharmacological intervention, but this should be handled by professionals who carefully review the doses. Specifically, the development of a treatment with dexamethasone has been studied but it is not advised as it can lead to health risks that are still poorly understood, since it is in the experimental phase (Speiser, 2015).

Can it be prevented?

If the family has this disease and they are considering having a child, it is recommended that they receive genetic counseling.

It is essential to diagnose the disorder as early as possible (in the prenatal phase) and thus be able to receive treatment early. As mentioned previously, if the fetus is diagnosed with congenital adrenal hyperplasia; The pregnant woman can take corticosteroids during pregnancy.

These drugs work by reducing the amount of androgens produced by the adrenal glands of the affected baby, and can help the baby develop normal genitalia.

However, we emphasize again that this method is not very widespread since it is currently in the experimental phase, that is, we still do not know its exact mechanism of action. This could lead to some side effects that endanger the health of both the baby and the mother (Kivi and Rogers, 2016).