Here we present 11 dynamics and games for preschool children that you can use both in the classroom and outside of it.

Games are a good way to teach children and have fun. These help them form identity and self-esteem as well as reinforce social and communication skills

Objective: To know the different trades that exist.

Procedure: This game must be done with more than four children. Once they have sat in a circle, they have to choose a profession that can be proposed both by them and by the faculty.

When everyone has already chosen the profession, they have to put their hand on their chests and sing the song of this game: “Anton, Anton, Anton Perulero each one who attends his game and the one who does not attend it will pay he will pay a garment”.

A child chosen at random by the teacher has to start, while the others sing the song to imitate the gestures of the profession previously chosen. The children who identify the profession, should imitate him if they do not, they have to pay a pledge.

When there is more than one garment stored, tests may be carried out for the children to recover it. Like, for example, running or jumping to the rhythm of a song.

Material: Scarves to cover the eyes of colors.

Procedure: This game is ideal when you have a class of about 20 or more children. Firstly, we divide the children into pairs, they have to examine their faces, then one of them blindfolds and has to discover his partner among the rest of the class only with the sense of touch.

Rules: You can not give clues to the partner talking or screaming.

Objective: Have fun playing with classmates.

Material: a bandage or bandana.

Procedure: One of the children has to bandage his eyes a handkerchief. Once it has been placed, it has to turn on itself with the help of the other partners so that it does not know where the rest has been hidden.

When he has finished taking the necessary turns, he has to look for his companions while they dance around him and touch him or call him, always trying not to catch them. In the event that the blindfolded player manages to catch a partner, he must identify it through the sense of touch. If it does, the roles are exchanged.

Rules: Can not be removed, nor raise the handkerchief.

Material: balls both large and small.

Procedure: All the children are distributed indistinctly by the place in which the activity is being carried out. Next, the teacher has to start screaming large or small balls and they have to run to catch them.

The child who fails to catch the ball that the teacher has appointed a priori, is eliminated.

Tip: The teacher has to prepare the place beforehand so that, not all the balls are together and there is not one for each child, both large and small. 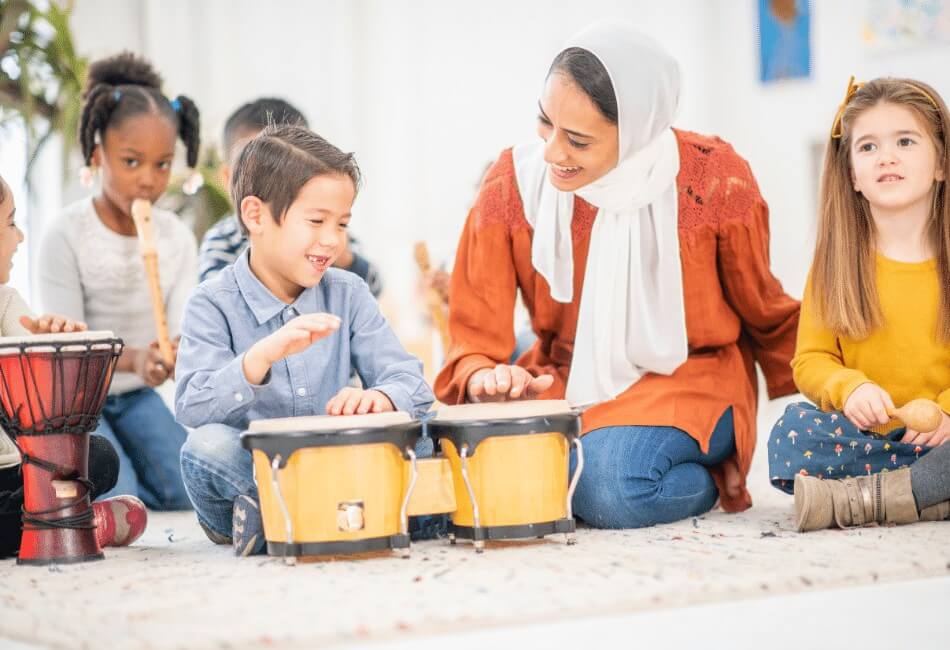 Procedure: First, you have to divide the children into two groups. All the players of one of them will have to carry a handkerchief in the pocket of their pants that will remain a little air.

The other group has to try to remove all the tissues from all the members of the group that has handkerchiefs. If one child manages to take it away from another, it is eliminated, so that in the end only players from the group that removes the handkerchiefs remain.

Objective: Work for the spatial organization.

Material: Hoops, balls, cones, and bandanas to bandage the eyes.

Procedure: We put the children in pairs, one of them will be placed inside a hoop with blindfolds, while the other has to help him to go through the obstacle course without getting out of the hoop and without falling or stumbling.

The obstacle course will consist of jumping into other rings that are placed on the ground, making a zigzag path without dropping the ones we have placed a priori and finally catching a ball and trying to dunk it.

Rules: Children inside the hoop can not get out or remove the blindfold. On the other hand, the couple that guides them can not separate and must grab the partner’s hoop at all times.

Tips: The teacher has to make two rows so that there are only four couples doing the activity, when they finish they will be allowed to start the next ones. Win the couple that takes less time to make the journey.

Procedure: Children should lie on the floor with their eyes closed and arms placed next to the trunk. They have to pretend they are asleep, so the noises we make when we are doing this activity are allowed.

Then, we begin to perform the breathing exercise that consists of inspiring and slowly expiring following the instructions of the teachers and to the rhythm of a relaxing music. Finally, the activity is finished by stretching and stretching all the muscles of the body.

Tips: This activity is recommended for children to rest after performing different exercises. If someone falls asleep, we can leave. The teacher should indicate in a soft voice the breathing exercises. It can be accompanied with the realization of smooth movements with the legs and arms.

8. We are Sumo wrestlers!

Objective: work the spatial organization with the partner.

Procedure: we have to place the children in pairs of two and then we have to explain to them that they should be placed on their backs and arms interlaced.

The game is that when the teacher of the signal, both have to try to touch the ground with all their strength, for this they have to agree and not try to do it on their own.

The players who get to touch the ground first are the ones who win. These will try to help those who have not yet achieved it.

Tips: The teacher has to encourage the students and divide the children into pairs that have an equal strength, in order to prevent them from hurting themselves.

9. We dance with a potato

Material: a potato of any size.

Procedure: Once we have divided the children into pairs, they are given a potato that they have to put on their foreheads and hold it between them. On the other hand, the arms have to be placed on the back while dancing to the music.

The couple that manages to finish the song without the potato falling out of them wins the game. If before they end they are dropped, they will be eliminated.

Tip: The teacher has to avoid that the boys hold the potato or touch it with their hands in order to avoid cheating. In addition, you have to control the song and go screaming movements that couples have to do to the rhythm of the music.

Material: bandages and soft balls of foam or derivative.

Procedure:  we divide the children in pairs, one of them is blindfolded. The game is that those who are blindfolded, have to throw the ball to each other to be eliminated. This will happen if the blindfolded man is touched by a ball twice.

Children who do not have their eyes covered have to guide those who have it by the arm and prevent at all costs that their partner is given by a ball. Win the couple that is not eliminated.

Tips:  For this activity to be developed safely, the teacher has to explain to the guides how it is the best way to guide the partner. Noting that you do not have to pull your arm, but tell them where to go with patience and without screaming too much.

11. Where are the missing objects?

Procedure:  the teacher has to hide a series of objects for the class. Next, you have to make a list on the board with the objects that you have previously hidden.

The activity consists in that the children must find the objects in a limited time by groups of 3 or 4 people. This activity can also be done at recess.

Tips:  if you play at recess or in an open place, the teacher or the responsible person has to properly establish the limits of the environment. On the other hand, you can also give clues as to where the objects may be located.