In order to understand the role of early care, we must understand the role to be taken into account that the development of children is a complex process of biological, psychological and social evolution, the result of the interaction between genetic and environmental factors. During this stage, numerous skills related to the perceptual, motor, cognitive, linguistic and affective-social aspect of the child are formed.

It is a critical period during which the nervous system has a high plasticity, that is, it can be altered by some external or internal cause. The risks that children may suffer from presenting a future developmental disorder may be biological or social.

It is considered a biological risk those children who have been subjected to situations such as being premature, being underweight or presenting  anoxia at birth. On the other hand, the psycho-social risk refers to the social conditions surrounding the child, such as lack of care or intrafamilial interactions, abuse, negligence, abuse …

In turn, plasticity is related to the capacity for recovery and organic and functional reorganization. But WATCH !, this capacity decreases later and will be fundamental the early detection, the beginning of the interventions and of course the family implication.

This is where early attention takes interest. It is a set of interventions whose purpose is to respond to the transitory or permanent needs of these children, as soon as possible, optimizing and compensating deficits.

The objective is that they can achieve an adequate maturity in all areas, as well as a high level of personal and social development. It is necessary to take into account the child as a whole and the participation of an interdisciplinary team (professionals share information) and transdisciplinary (professionals acquire knowledge of other disciplines).

The TA was started in Spain in the 70s by numerous associations of parents with children with difficulties. Beginning in the 1980s, the State began to create early care centers, previously called early stimulation centers.

In the year 2000, the Early Care Group (GAT) was established with the objective of preparing the White Paper on Early Care and overcoming the possible lack of coordination between the different professionals, associations, relatives and resources. The aim was to ensure fundamental aspects in this area such as interdisciplinarity, globalization, coordination and quality.

The ODAT, or diagnostic organization for early care, based on the White Paper of the TA, integrates existing classifications, organizing them according to reality and needs. It takes into account the bio-psycho-social approach, the 1st, 2nd and 3rd prevention (detection, diagnosis and treatment) and the common language among the professionals who work. It attends to the particularities and peculiarities of the child population from 0 to 6 years susceptible of AT. The Junta de Andalucía was the first organization that tries to combine ODAT and ICD-9. 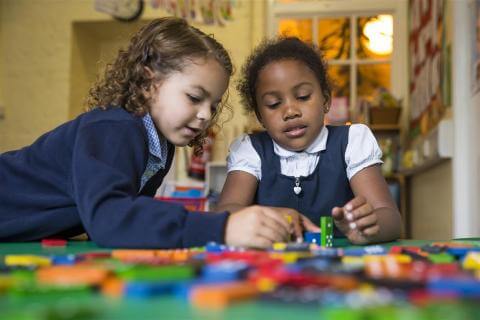 The following key objectives have been proposed to work towards:

-The adoption of measures for PREVENTION, both primary, secondary and tertiary.

-The EARLY DETECTION of the risks of deficiencies. Detecting if the child behaves, reacts and relates as expected for his age, @nalyzing and describing the strong and weak points of him and his environment.

-The INTERVENTION as a process aimed at achieving maximum physical, mental and social development. For example:

How to evaluate in early care?

To begin it is necessary to evaluate the child and his environment, both family and school. The more sources of information we have at our disposal, we can make a more comprehensive evaluation. The evaluation will start as soon as possible and will be made at the beginning, to corroborate what the parents say and half, to see how the child is evolving.

Areas to be evaluated

Regarding the aspects to be evaluated in the child , the cognitive area, the motor area (gross and fine motor skills), the language area (comprehension and expression), the socio-emotional area and the adaptive area or area must be taken into account. self-care

The last two are usually evaluated through questionnaires that parents fill out. In this way we will obtain information about the child’s behavior (anxiety, mood, somatic complaints) and about his personality (internal and external conflicts, temperament, relationship with father and mother, place he occupies in the family …).

It is also important to evaluate additional aspects in the child, through observation. These are: self-regulation that modulates attention and control of impulses; the persistence or repeated attempt to perform some action; the anticipation of failure, that is, when the child must face a task that he knows he will not achieve; the tolerance to frustration, or how the child continues despite accumulating successive experiences of failure; flexibility or to what extent it looks for alternatives to solve problems; the motivation or degree of enthusiasm and excitement about new games and the interactivity or the degree of relationship of the child with the evaluator as well as with his family.

An interesting aspect is that of the corrected age. This refers to the age that the child would have if it had been born at term, that is to say at 40 weeks of gestation. This is important to take into account to evaluate not only the growth but also the mental, motor, behavioral and language development. An illustrative example is if your child was born in week 28, was 12 weeks (3 months) premature. If you are now 6 months of age (24 weeks from birth), your corrected age is 24 weeks – 12 weeks = 12 weeks (3 months).

Regarding the evaluation within the family environment , it is important to attend to the current emotional state. That is, it is a family that is going to have a baby, for 9 months they have fantasized about how their child will be, who they will look like … however after birth a child is born that is not what they expected. The family spends a duel, and perhaps the father and the mother go to different rates of recovery, that must be taken into account.

We must also take into account the needs and resources of families, for example, if they live in a city or town; if they have an additional stress such as that there is someone unemployed in the family, that they have other children …; if they have sources of support such as a grandmother that can be ordered during the child’s work hours …

Finally, the parent-child bond and the existing attachment is fundamental, it will be evaluated if it is safe, insecure, ambivalent. In addition, the feeling experienced by the evaluator for the projection carried out on him by the family and the child will be fundamental and may serve as an orientation guide.

In the school environment, it  will be important to evaluate the availability to collaborate and / or share information, as well as the resources they have. Does the child have a teacher of therapeutic pedagogy and a psychologist? Is the tutor available when needed? Is there a curricular adaptation in the class? It must be borne in mind that many times parents refuse to let the school know anything about the fear of having their child labeled.

Difficulties associated with the evaluation

Given the possible difficulties that the child may have during the performance of the task, it is convenient to let it end even if the time required by it has not been met and it is not going to score. It is necessary to establish the ceiling of the test, and to do so, it must face tasks that the subject is not able to solve.

It is also important to observe how the child reacts to the accumulation of failures. In addition, we must bear in mind that the development of a child is staggered, and during it combine advances with stoppages and even setbacks. Sometimes these are produced to entrench previous advances or even recover from hospitalization.

Different instruments are available that can be used to confirm the initial hypotheses based on the child’s history, and to assess deficits as well as the abilities and abilities of the child.

-Observation of spontaneous and reactive behavior in situations and stimuli presented, as well as the relationship with the parents and the professional who evaluates. And observation at home.

-Evaluation in school context: relationship with classmates and the teacher.

– Physical examination and neurological and functional evaluation of the child.

In addition, at the beginning an in-depth interview will be conducted with the family of the child’s medical history, where they will be asked about aspects such as risk factors in pregnancy, delivery, postpartum, diagnostic tests and diagnostic printing.

Information on the evolutionary data will also be collected as cephalic support (fundamental ability to raise the head, explore, know the world that surrounds it and then walk), social smile, voluntary clinging, sitting down voluntarily, dragging or crawling, disyllabic , chewing, first steps, first words, first sentence and other evolutionary milestones.

Then I will comment on the instruments most used in early care, to assess newborns, development, behavior and personality.

To evaluate the behavior, attention will be paid to the behavior of the subject during the evaluation, as well as to questionnaires completed by parents and teachers.

As examples you can use the Child Behavior Check List or CBCL, which is a list of child behaviors where internalizing behavior is evaluated, where children direct their emotions and feelings towards the inside. That is, we could talk about anxiety and depression problems, somatic problems and withdrawn behavior.

Externalizing behavior directed to the exterior as aggressive or delinquent behavior. And finally, social problems, attention and thought, which may be present in these children. The BASC can also be used, which is a system for assessing the behavior of children and adolescents, where numerous aspects of behavior and personality are measured, including both positive (adaptive) and negative (clinical) dimensions.

These are instruments that stimulate the imagination of the subject, where there are no correct or incorrect answers, and which reveal unconscious aspects of the behavior. There are different subtypes. Some of the most used in early care to evaluate these children are the following. For example, thematic, where the objective is to tell a story from the visual presentation of pictures. Within this subtype we find the black paw test.

On the other hand, the expressive or graphics, where children should write or draw a picture. For example: the drawing of the Corman family; the test of the house-tree-person (HTP) of Buck or the game of the doodle of Winnicott, which allows us to see if the child always perseveres in the same or if he is creative.

Finally, the associative ones, where the objective is to emit answers that are associated with the stimulus, for example the fables of Düss.

Throughout this article I have tried to offer an overview of the difficulty of working with children with developmental difficulties, and the difficulty involved in evaluating them in early care.

In addition, the commitment of society to the protection of these children is very important, only in this way, and with the collaboration of all, it will be possible to attend to the inequalities that these present and the right to achieve an evolutionary development can be guaranteed. more normalized possible and a full and independent life.