The excoriation disorder is a disorder characterized psychopathological suffering from a dire need for touching, scraping, rubbing, scrubbing or rubbing the skin.

People who suffer from this disorder are unable to resist performing such behaviors, so they scratch their skin impulsively to mitigate the anxiety that is not to do so.

Obviously, suffer this psychological alteration can greatly damage the integrity of the person as well as provide high discomfort and reverberate greatly in their day to day.

In this article we will review what is known today about dermatilomania, what characteristics this disease has and how it can be treated. 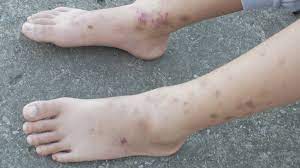 What is the relationship between skin and mental disorders?

Dermatilomania is a psychopathological disorder that was first described by Willson under the name of skin picking.

In its essence, this psychological alteration is characterized by the need or urgency to touch, scratch, rub, rub, squeeze, bite or dig the skin with nails and / or accessory tools such as tweezers or needles.

However, dermatilomania is still a poorly understood psychopathological entity with many questions to answer.

During the last years, many debates have been opened on whether this alteration would be part of the obsessive-compulsive spectrum or impulse control disorder.

Currently, there seems to be a greater consensus for the second option, understanding dermatilomania as a disorder in which, in the presence of pruritus or other skin sensations such as burning or tingling, the person feels an extreme need to scratch, for what ends up doing the action.

However, the relationship between the skin and the nervous system seems to be very complex, so there are multiple associations between psychological alterations and skin alterations.

In fact, the brain and skin have many associative mechanisms, so that, through their injuries, the skin can account for the emotional and mental state of the person.

More specifically, a review conducted by Gupta showed that between 25 and 33% of dermatological patients had some associated psychiatric pathology.

Thus, a person who suffers from alterations in the skin and mental state, as is the case of individuals suffering from dermatilomania, should be evaluated as a whole and guide the explanation of the alterations suffered in two aspects.

1. As a dermatological disorder with psychiatric aspects.

2. As a psychiatric disorder with dermatological expression.

These data show how the relationship between skin and mental state is bidirectional, that is, cutaneous alterations can cause psychological problems, and psychiatric disorders can cause alterations in the skin.

Obviously, when we talk about dermatilomania, we are referring to the second aspect, that is, a psychopathological alteration (dermatilomania) causes effects on the skin due to compulsive scratching.

However, excoriation disorder is not the only mental disturbance can cause skin disorders, and other diseases such as depression, the  obsessive compulsive disorder, the body dysmorphic disorder or disorder, post traumatic stress can also cause skin problems.

But what would happen if the act of biting the nails cause wounds, bleeding, or infections, or if the act of pinching “the black dots” would cause moles, spots, and definitive marks?

In those cases, an action that in principle normal, would become pathological, since the person perform repetitive acts on his skin despite being causing damage and diseases.

Thus, with this brief review on the relationship between mental state and skin condition, we already see that the definition of a psychopathological entity such as dermatilomania is more complex than it could at first glance. 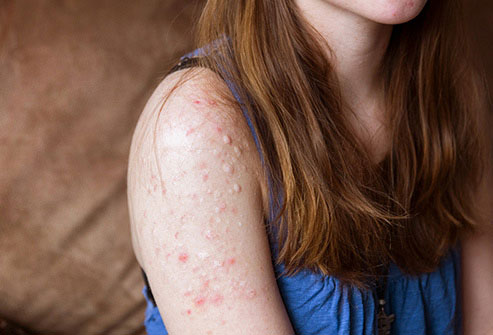 Dermatilomania, is also known today through other names such as compulsive cutaneous scrape, neurotic excoriation, psychogenic excoriation or excoriated acne.

With these 4 alternative names to dermatilomania, we can see more clearly what is the main expression of the mental disorder.

In fact, the main characteristic is based on the feelings of need and urgency that the person experiences at certain moments of scratching, rubbing or rubbing their skin.

Normally, these sensations of need to scratch appear response to the appearance of minimal irregularities or defects in the skin, as well as the presence of acne or other formations on the skin.

As we have commented previously, the scratching is done in a compulsive way, that is, the person can not avoid scratching the determined area, and it is done through the nails or some utensil.

Obviously, this scratching, either with the nails or with tweezers or needles, usually causes tissue damage of different severity, as well as skin infections, definitive and disfiguring scars, and significant aesthetic / emotional damage.

Initially, the clinical picture that defines dermatilomania appears in response to pruritus or other skin sensations such as burning, tingling, heat, dryness or pain.

When these sensations appear, the person experiences immense needs to scratch that area of ​​skin, so he initiates compulsive scratching behaviors.

It is necessary to emphasize, that as much if we understand the alteration as a disorder of impulse control as an obsessive compulsive disorder, the person can not resist performing the scratching actions because if he does not he is not able to get rid of the tension that suppose not doing it.

Thus, the person begins to scratch the skin in a totally impulsive way, without being able to stop to reflect if it should do it or not, and evidently, causing marks and wounds in the cutaneous area.

Subsequently, the scratching impulses do not appear before the detection of pruritus, acne or other natural elements of the skin, but by the permanent observation of the skin itself.

In this way, the person with dermatilomania begins to obsessively @nalyze the state of the skin, which makes controlling or resisting their desire to scratch becomes an almost impossible task.

During the observation the nervousness, tension and restlessness increases, and can only decrease if the action is carried out.

When the person finally performs the action of scratching or rubbing his skin impulsively, he experiences high sensations of gratification, pleasure and relief, which some patients come to describe as a trance state.

However, as the scratching action proceeds, the feelings of gratification diminish while the previous tension also disappears.

Thus, we could understand the operating pattern of dermatilomania as extreme tension sensations which are eliminated through the action of rubbing the skin, behavior that provides a lot of gratification at first, but disappears when there is no longer so much tension .

As we see, although we have to save many important distances, this pattern of behavior differs little from what a person addicted to a given substance or behavior does.

Thus, the smoker who spends many hours without being able to smoke increases his state of tension, which is released when the cigarette is lit, at which time he experiences a lot of pleasure.

However, if this smoker continues smoking one cigarette after another, when smoking the fourth consecutive, probably not experience any tension and most likely the gratification that provides nicotine will be much lower.

Finally, the person suffering from dermatilomania feels shame and self-reproaches for the injuries and injuries resulting from their compulsive scratching behavior, which can cause multiple personal and social problems.

What data exist about dermatilomania?

So far we have seen that dermatilomania is a disorder of impulse control in which the person is unable to resist scratching certain areas of their skin due to the previous tension caused by self-observation and the detection of certain skin aspects.

However, what areas of the body are usually scratched? What sensations does the person suffering from this alteration have? What behaviors do you normally perform?

As it has been commented, still at present there is little knowledge about this psychological disorder, however, authors such as Bohne, Keuthen, Bloch and Elliot have contributed more than interesting data in their respective studies.

Thus, from a literature review by Dr. Juan Carlo Martínez, we can draw conclusions such as the following.

How many people suffer?

The epidemiology of dermatilomania has not yet been well established, so the existing data is not redundant.

In dermatological consultations the presence of this psychopathological disorders is confirmed between 2 and 4% of the cases.

However, the prevalence of this problem in the general population is unknown, in which it is understood that it would be lower than that found in dermatology consultations.

Likewise, in a study carried out on 200 psychology students, it was found that most of them, 91.7% admitted having pinched their skin during the last week.

However, these figures were much lower (4.6%) if one considered the action of pinching the skin as a response to stress or a behavior that produced functional impairment, and up to 2.3% if that action was considered to have some relation with some psychiatric pathology.

Nowadays we do not find in the literature a unique and totally effective treatment to intervene this type of psychopathologies.

However, the most commonly used methods among mental health services to treat dermatilomania are the following.

Normally, antidepressant medications such as selective serotonin inhibitors or colomipramine are commonly used , as well as an opioid antagonist and glutamatergic agents.

This therapy focuses on finding the underlying cause of the disorder, as well as the effects it may cause.

The patient is helped to develop skills to control the impulse without damaging and reducing the scratching behaviors.

This therapy has obtained very good results for the treatment of obsessive-compulsive disorder, so similar effects are expected in the

With this treatment, behavioral techniques are developed to prevent the appearance of impulsive acts, and at the same time the obsessive scratching thoughts are worked on so that they are experienced with lower levels of tension and anxiety.