Visual problems are present in a large percentage of the world’s population, having been on the increase in recent decades and presbyopia is the most common eye disease after 40 years of age.

Eye diseases such as myopia, hyperopia and astigmatism, constitute vision problems related to defects in visual refraction, which make it difficult for the person who suffers from them to be able to clearly perceive perceived objects that are at a certain distance.

There are also other eye diseases that cause quite a few problems in the lives of those who suffer from them, such as cataracts and glaucoma, while there are diseases that do not cause so many difficulties on a day-to-day basis, such as color blindness.

Here you will find a summary of the most important eye diseases , ranked.

What are the main eye diseases?
Visual refraction consists of a process in which light, which comes from external objects, passes through the various parts of the eye , where there are photoreceptor cells (rods and cones), which are responsible for converting light from objects into nerve impulses that reach the brain through the optic nerve , to be transformed into images.

So, after this process, the images of the objects are concentrated on the retina.

In the cases in which these rays of light are projected on the retina at only one point, so that the image created is sharp, we would be talking about a correct refraction process, which makes an emmetropic eye that does not present any pathology with regarding vision refraction.

On the other hand, if there is a problem in this process of visual refraction, so that the eye is not able to sharply focus the images on its retina, suffering from blurred vision towards objects or people that are at a certain distance, we would speak of a refraction problem .

Depending on the distance at which this difficulty is present in perceiving objects and people clearly, we would speak of one pathology or others.

Next we will see the most common visual pathologies, classified.

2. Hyperopia
Other diseases of the eye related to visual refraction is hyperopia, which occurs when the rays of light projected in the eye, which come from perceived external objects, cross the back of the retina, while they should do it in it .

However, farsightedness, unlike nearsightedness, can compensate for its refractive error, in part, by increasing the dioptric power of the lens , the part of the eye that lies between the iris and the vitreous humor; whose function is to focus the objects perceived outside.

Therefore, a person with mild or moderate hyperopia and can have correct vision thanks to the increased capacity of the lens, so that the light rays that pass through the eye, coming from objects perceived from the outside, are correctly focused on the retina without blurring of vision. 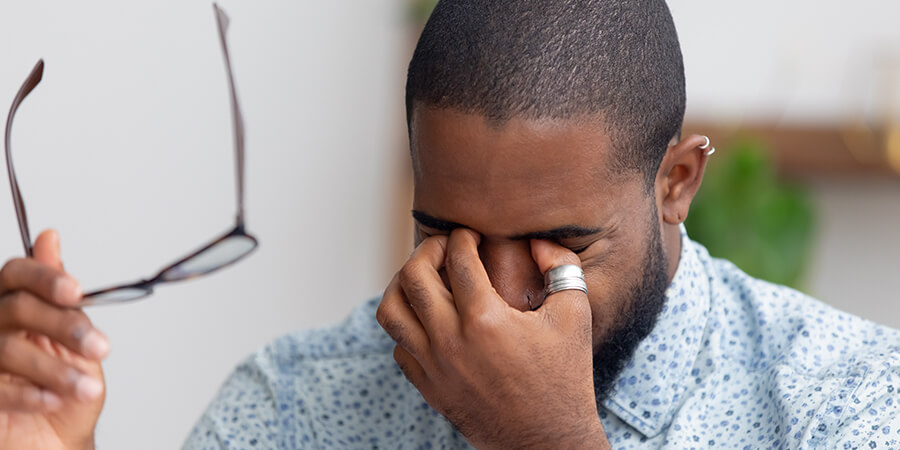 Hyperopia, if detected early, does not tend to worsen in severity over the years , if detected at an early age.

On the other hand, with the use of corrective glasses, in addition to being able to see correctly, during the child’s development stage, the length of the eyeballs tends to increase and, with this, the number of diopters will decrease, which may become insignificant. upon reaching adulthood.

3. Astigmatism
A large percentage of people with farsightedness or myopia also tend to have some degree of astigmatism.

When a person suffers from astigmatism, they perceive an image of objects out of focus (for example, perceive the edges of objects with poor definition), occurring both for distant and close objects, that is, that the person has difficulties to be able to see subtle details of objects, both at near and far distances.

4. Presbyopia (eyestrain)
Due to a common evolutionary aging process, the lens diminishes its ability to focus on objects coming from the outside in the retina, produced by a weakening of its ciliary muscles , which is why most people from a certain age go losing that ability to focus correctly without the use of contact lenses.

It is common for presbyopia to begin at 40-45 years of age, although in some cases it may appear at an older age.

Other common eye diseases
Next, other eye diseases will be briefly explained, although they are less frequent than those related to visual refraction, they also occur in many cases.

“You may be interested in: I have anxiety: how do I tell it to my environment?”

1. Color blindness or dyschromatopsia
This visual disease causes the subjects who suffer from it to have great difficulty in being able to distinguish between certain colors , because they have 2 types of cones when they should have 3.

There are 3 types of dyschromatopsia:

The way in which glaucoma causes damage to the open angle is when the aqueous humor (liquid that allows to nourish and oxygenate the cornea and lens) is not able to drain effectively , so that fluid accumulates and with it increases the pressure in the eye , so that the optic nerve is damaged.

Therefore, the two most common symptoms of this visual disease are:

Having blind spots in side or peripheral vision.

3. Cataracts
This vision disease occurs when a cloudiness is perceived in the lens, instead of being totally transparent, so that it does not allow the lens to focus well the light from the objects perceived to focus them correctly on the retina, so it is has blurred vision. In addition, it is an eye disease that is increasing if it is not intervened in time.