The Fabry disease is an inherited condition that is associated with an accumulation of a particular type of lipid in different  body structures (Genetics Home Reference, 2016).

This medical condition has a genetic origin associated with the X chromosome and its clinical characteristics are caused by the presence of deficient levels  of the α-galactosidase enzyme (Martínez-Mechón et al., 2004).

The clinical course of Fabry disease (PE) can occur in the early stages of life, especially in men, and may include signs and  symptoms such as neuropathic pain, hypohidrosis, skin lesions, corneal abnormalities, tiredness, fatigue, auditory capacity,  heart failure, renal failure and / or cerebrovascular accidents (Guelbert et al., 2015).

The serious multisystemic affectation of the PE, will cause a significant deterioration of the quality of life, which can lead to the  development of other secondary medical pathologies and even the early death of the affected people (Barba Romero et al., 2012).

The diagnosis of PE is usually made based on the existence of a defined clinical picture, in addition, they usually use a laboratory @nalysis of  enzymatic activity and a genetic study to confirm the pathology.

The treatment used in PE is intended to prevent the development of secondary medical complications and to compensate for the enzyme deficit  (Ortiz and Marrón, 2003). In this case, therapeutic intervention through enzyme substitution has been shown to be widely effective in  prolonging hope and quality of life (Barba Romero et al., 2012).

Fabry disease (EF) is a genetic pathology, whose symptoms occur as a result of the accumulation of lipid deposits in the cells of  different organs and structures of our body (Genetics Alliance, 2016).

In the body there are thousands of active substances, among which are the enzymes. The enzymes, are a type of protein molecule that  are prominent in the regulation and / or acceleration of certain biochemical reactions paper.

Thus, for example, in the intestinal structure, we have enzymes that help us break down food to regulate the digestive process and the extraction  of the fundamental nutrients for the organism (Genetics Alliance, 2016).

In addition, a large part of these enzymes are stored in a specific region of the cell structure, called the lysosome. It is capable of providing  the body with support for the decomposition of lipids, carbohydrates and proteins (Genetics Alliance, 2016).

Thus, in Fabry disease, the functioning or lack of an enzyme essential for the metabolism of lipids and other similar substances, called α-galactosidase , causes insufficient degradation.

Therefore, lipids tend to accumulate in different regions of the  body such as the nervous system, the cardiovascular system, apathetic, ocular, etc. (National Institute of Neurological Disorders and Stroke, 2016).

With the passage of time, the development of the pathology and the persistent accumulation of substances thanks, will begin to appear different clinical manifestations  that will include neurological, renal, cardiac, cutaneous, vestibular alterations, among others (Orphanet, 2012).

In addition, Fabry disease presents two clinical forms, classified according to their intensity and / or severity:

Fabry disease is a rare medical condition in the general population. Statistical studies show us that it has an approximate prevalence  of 1 case per 40,000-60,000 people (Genetics Home Reference, 2016).

On the other hand, in relation to the incidence of Fabry syndrome, it has been pointed out that it can be around one case per every 80,000 babies born alive per year. However  , this data can vary substantially if we consider those cases in which the definitive diagnosis is established late  (Orphanet, 2012).

As for its distribution by sex, it is a disorder that mainly affects males, however, there is a milder form, which can occur  with more in women (Genetics Home Reference, 2016).

Although the symptoms are expressed differentially between the phenotypic forms of Fabry disease and among patients, some authors such as  García de Lorenzo et al., (2011), point out some of the most frequent clinical features in this pathology organized in function of its temporal evolution  : 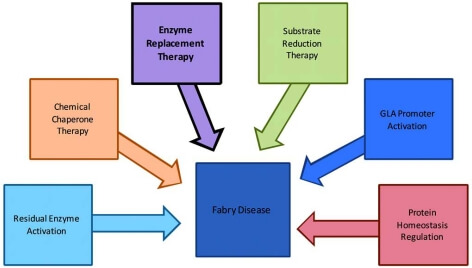 Clinical characteristics during childhood and adolescence

In addition, if we take into account the two types of clinical presentation of Fabry disease, we can point out that the most common signs and symptoms in each  of them are the following (National Organization for Rare Disorders, 2015):

On the other hand, various symptoms related to the psychological sphere in Fabry’s disease have also been described (Genetics Alliance, 2016):

Fabry disease presents a hereditary nature, associated with the presence of genetic alterations linked to the X chromosome. Specifically, the  clinical pattern is related to a mutation of a gene located on this chromosome (Genetics Home Reference, 2016).

The etiological mutation of this pathology was identified in 1989, it was observed that it was related to the gene that encodes the α-galactosidase enzyme at  position Xq 22.11 (Barba Romero et al., 2012).

Thus, when the genetic mutation affects the production of α-galactosidase, the deficient levels of this enzyme, will lead to a lower decomposition  of the glycolipids. Therefore, a persistent accumulation of GL3 and other lipid substances will occur in different cellular locations  (National Organization for Rare Disorders, 2015).

As a result, progressive degeneration of cells of different structures will occur, especially in the heart, kidneys or nervous system  (National Organization for Rare Disorders, 2015).

The clinical characteristics of Fabry disease can appear in all affected individuals of any sex or age, however, it is more common  that they begin to develop later in the female sex (Genetics Alliance, 2016).

Thus, the diagnosis of this pathology begins with clinical suspicion: findings of renal or cardiac insufficiency, stroke without known cause, corneal hyperopia  , among others (Barba Romero et al., 2012).

In this phase, it is essential to collect data about family and individual medical conditions and history, in order to identify the  possible presence of hereditary factors of Fabry disease.

Once clinical findings are observed, compatible with the possible enzyme deficiency, a study of the concentrations of  α-galactosidase or α-Gal A in the organism is required.

Generally, the most used laboratory test is blood @nalysis. Once a small blood sample is extracted, it is possible to observe the  concentrations of α-galactosidase (Genetics Alliance, 2016).

If a deficient concentration is detected, then it will be necessary to carry out a genetic study confirming Fabry disease, specifically, it  is necessary to detect a mutation in position Xq 22.11.

In addition to this, it is important to rule out the presence of other medical conditions such as rheumatic pathologies, peripheral vascular syndromes or neurological disorders.

There is no curative therapy for Fabry disease, however, enzyme replacement is a therapeutic intervention that has reported  important medical benefits (Cleveland Clinic, 2016).

Specifically, enzyme replacement therapy, tries to increase the concentrations of α-galactosidase in blood and, therefore, reduce the  storage or retention of lipids (Cleveland Clinic, 2016).

When it is possible to control the persistence of lipids, it is expected that the medical complications associated with the multistemic lesions will remit  significantly. However, some symptoms such as pain or kidney failure can be treated by pharmacological approaches.