The drug flakka is a highly stimulating substance of the central nervous system that causes multiple physical and psychological alterations. It can be consumed both orally and snorted, smoked or injected

It is a drug of recent appearance that has begun to be used for recreational purposes. Its consumption has already been detected in multiple countries in Europe, America and Asia.

At present, due to its recent appearance, the literature about the characteristics of this new substance is scarce. However, there are already some investigations that have focused on describing the main effects caused by its consumption.

The aim of this article is to integrate all the information available today about the drug flakka and provide a detailed explanation of the characteristics that are known about this substance. 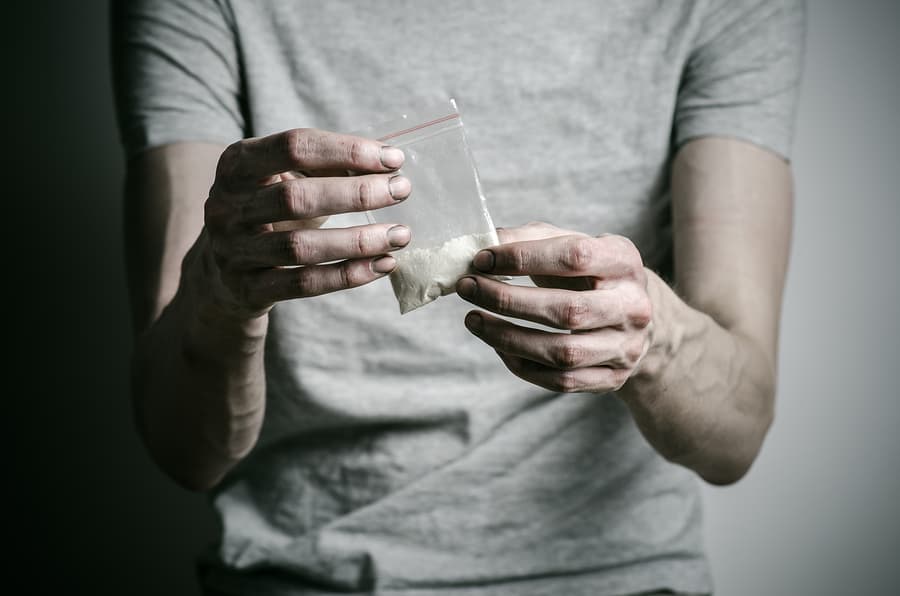 Appearance of the drug flakka

The fact of cataloging the flakka drug as a new psychoactive substance rests in the recent appearance of this psychotropic drug. In fact, a little over a year ago, the first presence of this substance worldwide was detected.

Specifically, the appearance of the drug flakka goes back to the month of April 2015 when the police department of fort lauderdale in the State of Florida (United States) launched an alert on the appearance and seizure of this substance.

It was determined that it was a synthetic drug that had not been commercialized or consumed previously. Likewise, the recreational use of this substance in the state of Florida was related to a notable increase in the number of violent incidents in that region.

As regards Spain, the first notifications of the arrival of the drug flakka date back to the summer of the same year. That is, a little more than a year ago this substance is present in Spanish territory.

Its seizure and @nalysis corroborated the data initially provided by the United States, and it was ruled that the substance detected also referred to the drug flakka.

Simultaneously, this drug has been detected in other countries in Europe and Asia, as well as in most regions of the United States.

Danger of the drug flakka

The first data that have appeared about this substance have been highly alarming. In fact, the danger of the drug flakka was determined even before the description of its active ingredients and the effects produced by its consumption.

After its first detection in the state of Florida, it was ruled that consumption of flakka drug had already produced a total of 32 fatalities in the city of Miami.

Likewise, police authorities of Broward County recently reported that since the presence of the substance was registered, more than 500 incidents related to its consumption have been detected.

These preliminary data about the widespread damage caused by the consumption of the Falkka drug are alarming and postulate that the physical and psychological effects produced by this substance could be numerous and very serious.

Likewise, another element that increases the dangerousness of the flakka drug and makes it a potentially devastating substance for society falls on its acquisition price.

The drug flakka has a market price ten times lower than other stimulants such as cocaine or methamphetamine (approximately $ 5).

This fact causes a high risk that their consumption will skyrocket and that even consumers of other drugs will use the flakka drug as a brain stimulator.

Although only a few months ago that the existence of this synthetic drug is known , its devastating effects and the massive increase in its consumption have motivated investigations into its characteristics have not been long in coming.

The results obtained to date are partial and do not yet have high scientific evidence. However, they allow a first sketch of the characteristics of the drug flakka.

In general, it is postulated that the consumption of this substance causes important alterations in the physical and mental functioning of the person. These alterations seem to be closely related to a very high increase in brain stimulation.

The physical effects of the drug flakka are not those that motivate its consumption. That is, the rewarding effects that result from the use of the substance do not result.

However, the first investigations on the flakka drug postulate that these effects could be the most harmful and dangerous. They are considered as side effects, which are present in a large number of cases.

The majority of physical symptoms that provoke the consumption of drug flakka are related to the alteration of the cardiovasuclar functioning.

Authors postulate that when the substance reaches the brain it carries out a high catecholaminergic hyperstimulation that leads to cardiological alterations. Those detected today are:

These effects are usually perceived by the consumer, who may experience palpitations, weakness, choking or fading.

The tachycardia produced by the drug can cause a permanent state of hypertension. The figures of blood pressure in the arteries increases continuously and can lead to serious cardiovascular diseases.

Myoclonus are involuntary, brief, abrupt and sudden movements of the heart. These can be generalized, focal or multifocal and present themselves in the form of jerks.

Although it is still not very well described what type of myoclonus causes the consumption of drug flakka, some cases have been described with this type of affections.

Another of the most detected physical effects in flakka drug use are related to body temperature. In fact, it has been described how the use of this substance usually produces an abnormal increase in body temperature.

Specifically, it is estimated that the consumption of drug flakka can raise the body temperature to more than 38 degrees, and in some cases may require medical intervention imminently.

The arrhythmias are often disturbances and heart rate in which the heart can beat too fast, too slow or irregularly.

Current data suggest that the main effects of the drug flakka usually produce an increase in heart rate (tachycardia). However, in some cases other types of arrhythmias have also been connoted.

The consumption of drug flakka can produce an ischemic heart disease in which an imbalance between the supply of oxygen and cardiac demand originates.

This alteration occurs due to an obstruction of the arterial irrigation to the cardiac muscle and, in part, being able to cause multiple cardiac damages, it can also cause death.

This condition has not been connoted in all cases but may appear through a single consumption. Thus, it is considered that the drug flakka is a highly toxic and potentially deadly substance.

The psychological effects of the drug flakka are those that produce gratifying sensations and therefore those that motivate their recreational consumption.

Being a synthetic stimulant drug, its main effects at the cerebral level are characterized by the experimentation of energizing, euphoric and highly gratifying sensations.

a) Feelings of euphoria

The main effect that causes the consumption of drug flakka translates into high sensations of euphoria and pleasure.

It is postulated that these effects could be similar to those of other stimulant drugs such as cocaine and would entail a remarkable addictive potential of the substance.

On the other hand, the hyperstimulation caused by the substance causes an increase in the alertness of the individual. The senses are sharpened and cognitive processes are accelerated after consumption.

One of the most consistent data that has been collected indicates that the consumption of drug flakka has an important aphrodisiac effect and its consumption increases excitement and sexual desire.

Likewise, this substance causes a remarkable increase in energy, eliminates feelings of fatigue and leads to a state of generalized hyperexcitation.

Due to the above effect, people who consume this substance experience a high increase in their activity. This fact is reflected in their behavior, which is often hyperactive, agitated and impulsive.

Not all the psychological effects produced by the flakka drug are rewarding for the consumer. In fact, in several cases unpleasant effects have been described, panic attacks being the most prevalent .

Also, among the negative effects of drug consumption flakka is the development of a psychotic episode. This substance can induce delusions and hallucinations with relative ease, especially when high amounts are ingested.

Another one of the most particular effects of the flakka drug and that has motivated a greater interest for this substance is that its consumption usually originates states of agitation and aggressiveness. Likewise, cases have been described in which the substance has provoked extreme aggressiveness.

The drug flakka contains alpha-pyrrolidinopentiophenone (alpha-PVP) as the main active component. This substance is a synthetic cation that is derived from pyrovalerone.

The information on alpha-PVP in the scientific literature is very scarce, so much of its mechanism of action is unknown.

Generally, it is known that synthetic cations are beta-ketone amphetamine compounds that are derived from cation. These substances are commonly found in bath salts and plant fertilizers.

However, studies that have investigated the toxicity of cations in humans are very scarce. So the majority of knowledge that is possessed today about these substances comes from clinical cases or personal testimonies.

As regards alpha-PVP, several in vitro studies show that this substance acts as a potent blocker of the dopamine and noradrenaline transporters.

Thus, alpha-PVP has a pharmacological profile similar to that of another pyrovaleric cation known as methylenedioxypyrovalerone (MDPV).

When the drug reaches the interior of the brain it blocks the transporters of dopamine and noradrenaline, which increases the presence of these substances, a fact that motivates the cerebral hyperstimulation.

As with the rest of the characteristics, at present there is still no scientific evidence to determine the addictive potential of the drug flakka.

However, two factors about their qualities postulate that the addiction that can generate the consumption of this substance could be very high.

First, as with other stimulant drugs, the drug flakka acts directly on dopamine, increasing its presence in the brain.

Dopamine is a neurotransmitter closely related to the sensations of gratification and on which all addictive drugs act.

On the other hand, the effects caused by the consumption of flakka drugs disappear in a short time, a fact that motivates many consumers to want to use it again impulsively.

Also Read: The 9 Effects of Short and Long Term Ecstasy

Thus, in the absence of corroborated and contrasted data, it is currently postulated that the addictive potential of the drug flakka could become very high.