One of the characteristics of the psychological grief that people go through after losing someone they love is, as a general rule, the feeling that what they have experienced with the other person is an unfinished story . That is, a narrative that has not come to a true outcome.

And is that even the relatives of a very old person or someone who has been very ill for years tend to experience the death of that loved one as a false closure, a hasty and “artificial” way of ending the journey of that relationship.

However, when the grief is produced by the loss of someone important to oneself but with whom a complicated and emotionally ambivalent relationship has been maintained, that distressing experience is further intensified. It is partly for this reason that, although it seems a paradox, grief can become more painful when someone is lost with whom an emotional bond was not maintained solely and clearly based on pure love.

In this article we will review the characteristics of psychological grief in complicated relationships , and its implications in psychotherapy.

What is grief?
Let’s start by focusing on the concept of psychological grief. What is it? In short, it is the psychological state of discomfort that appears after an event that we interpret as a loss of someone or something that was important to us : a house, a job, the university environment, beauty itself, a pet , an object with sentimental value for what it symbolizes, or, in the clearest cases, a friend, a relative or a partner.

Thus, it can be said that psychological grief is the consequence of “leaving behind” something or someone with whom we were united by a strong positive emotional bond. It is a consequence, in part, of the problems adapting to a new reality in which we no longer have access to that person or element so important to us, and of the challenge of managing emotionally the memories of what united us with that loved one , place, physical feature or object.

Some of the most common experiences related to grief are the following:

Uncontrolled crying when vividly remembering experiences we would like to return to
Tendency to focus on the past and not so much on the present.
Constant comparisons between the reality that takes us through our memories and the one we experience in the here and now.
Feelings of guilt for not having acted otherwise before that loss occurred.
Feeling that we will not be able to live life the same way again.
In most cases, grief produces intense discomfort, but as the weeks go by it becomes more bearable until it reaches a point where it no longer significantly damages the quality of life of those who have been suffering it; However, in some cases it acquires psychopathological characteristics and it is necessary to go to psychotherapy. 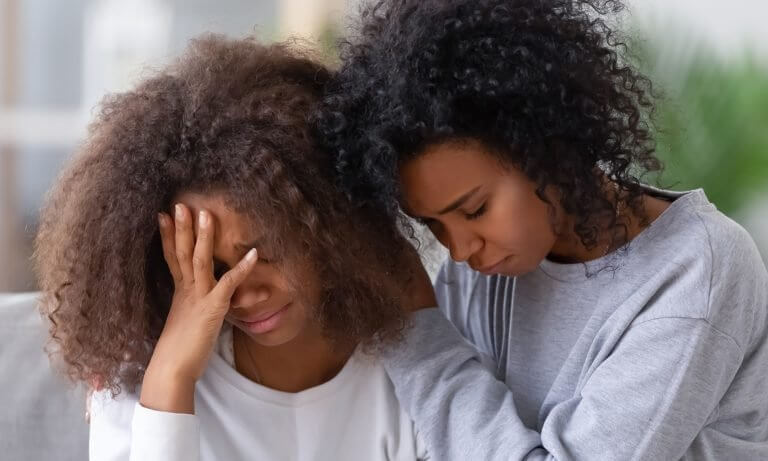 Main characteristics of grief after a complicated relationship
Before we have seen that grief occurs when we find ourselves with a situation in which we disconnect with a person, animal or aspect of the day to day with which we felt very close, so that this loss overwhelms us emotionally because that bond was based on pleasant or exciting emotions that we usually associate with the “positive” side of life: the pleasure of dining with a boyfriend or girlfriend, Christmas with grandmother, the experience of playing with our pet . However, this is only half true .

Sometimes, it is difficult to consider simply as “positive” the bond that binds us to a person important to us . This is very common when we have gone through an unsatisfactory or conflictive relationship, or when we have grown up in an unstructured family with parenting problems.

In fact, the experience of going through a mourning for the loss of someone with whom you had a complicated relationship is very common in the case of a couple breakup: in many cases, that separation is experienced as a bitter moment that has been preceded of a time of happiness with that person.

In cases like this, it is usual that emotions towards the other person that are apparently contradictory overlap , since on the one hand they have felt illusion by the fact of starting that dating relationship or that marriage, and on the other, a series frustrating, sad or simply anxious events have led to an outcome that, seen from the past, is undesirable. So how do we feel about this loss?

Thus, if practically all cases of mourning have in common due to the fact of leaving a complicated relationship behind, it is the clash between emotions that apparently pull oneself towards opposite sides, and that produce a feeling of sentimental and even intellectual instability ( since it is difficult to explain what has happened). Let’s see what are the main psychological elements of this process.

1. More accentuated feelings of guilt
The dissatisfaction between what could have been and what has finally been the relationship makes many people feel very guilty for not having been able to make positive that relationship with those who are left behind.

2. Anguish at the lack of only one way to interpret the relationship
As in a complicated relationship there is usually some kind of confrontation or clash of interests, it is difficult to be sure that our version of events is correct . This is very significant, taking into account that in grief, human beings tend to seek a stable way of interpreting and narratively structuring our memories of what we lived with that person.

3. Feeling of dissociation from the person left behind
In grief over complicated relationships, it is more common for the person to notice that the person from whom they have really separated and the person they remember and recreate in their imagination are different , and that the latter “is not reliable” because it is a recourse to self-deception.