The h0m0phobic bullying is any kind of physical or verbal abuse, done with intent to harm, where there is an imbalance of power between the aggressor and the victim, and caused because the victim has a different sexual orientation than expected socially.

The person who practices h0m0phobic bullying usually tries to assert himself through causing harm to the other person, in this case the victim in his or her own sexuality.

The expression of this aggression implies the desire to partially destroy the other, eliminating all kinds of compassion and limits. In these cases, the abuse committed by the aggressor is aimed at attacking the victim because of his sexual orientation (De la Fuente Rocha, 2014).

The peers, that is to say their peers, are usually aware of this situation and still allow it to happen. Sometimes, it is usually given behind the back of an adult who does not know it completely or who even minimizes the action and ignores it.

All these agents are collaborating with the aggressors and encouraging action by omission of action. (Platero and Ceto, 2007). Therefore, it is important to raise awareness among the educational community and the environment of young people, as we will see later.

This type of abuse is favored by h0m0phobia, in fact, a large part of h0m0sexual students frequently suffer harassment from their peers (report of the FGLBT association, 2012).

Although there have been few studies, there are approximate data on bullying that happens linked to h0m0phobia and sexism.

According to the report that was presented in the European Parliament in 2006, alarming data are shown, as in the people who participated in this study, some 700 young lesbians, gays, bisexuals and transsexuals from 37 different countries face 61.2% of discrimination at school. 51.2% do so in family life while 29.8% face it in their circle of friends (Méndez, 2015).

From another study that was conducted in Madrid and Gran Canaria (Spain) in 2007, on the attitudes towards sexual diversity of the adolescent population, it was possible to conclude that despite the tolerance and acceptance of the people interviewed, a One third of young people continue to maintain h0m0phobic attitudes.

It was also concluded that immigrant students socialized in less tolerant countries of origin contribute to these h0m0phobic attitudes (Méndez, 2015).

As we can see, the feeling of rejection towards people who are not heterosexual is more present than ever in today’s society. There are many people who receive this treatment not only in the educational environment but in their day to day in general although its peak or maximum fullness occurs in adolescence. 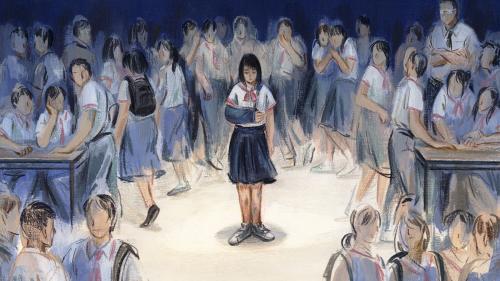 During the history of humanity, different ways of understanding our body as well as sex and sexuality have prevailed and stood out. This concept has been transformed until today, thus prevailing heterosexuality against h0m0sexuality.

As with h0m0sexuality, h0m0phobia throughout history has been gaining strength because it has been fostered both by myths and by customs that have been transmitted in one’s own culture and by the main socializing agents, the family and the school reinforced in turn by the media.

The school as Kellough points out, cited in Morales (2007) “being an institution of culture reproduction par excellence plays an important role in the construction of the values ​​of tolerance and respect, but also precisely because of its socializing role, it has to reproduce stereotypes and stigmas compared to those considered different, as is the case of young people with sexual preference other than heterosexual”.

Therefore, educational institutions reproduce traditional social values ​​that, as has been pointed out in terms of sexuality in general and sexualities in particular, consider all expression different from heterosexual as deviant and abnormal.

From all of the above, it can be concluded that the main cause of h0m0phobic bullying is found in the way in which society interprets heterosexuality as the only accepted form of sexuality, and to all sexual manifestations different from it as something not allowed.

Social factors that promote it

The factors that promote h0m0phobic bullying are the following:

Some elements that differentiate this type of bullying from the other forms of bullying that exist are according to Molinuevo (2007):

In addition to the above, we can also find other important elements common with other types of gender violence towards women or workplace harassment.

Normally, this type of violence is usually exercised from people who feel very powerful or superior to their victims, who usually have no chance to defend themselves.

Coupled with the above, this type of violence is characterized by having a quiet environment, that is, the people surrounding the victim do not usually give away the aggressor or aggressors.

How can you intervene in h0m0phobic bullying?

In order to intervene in h0m0phobic bullying, it is important that sexual education be addressed both at home and at school, focusing on three aspects: content, attitudes and skills.

You can think that this would be enough, however, it is not so because it has already been seen with other important issues such as sexually transmitted infections, where the informative talks in schools does not work.

Therefore, although it is vital to offer information about h0m0sexuality, lesbianism and transsexuality as possible forms of sexual orientation or gender identity. It is also important that they be done in order to change the negative attitudes that can be had before these groups (Méndez, 2015).

In schools, we do not find information or references to sexuality. Normally we do not talk about lesbianism, h0m0sexuality, bisexuality or transsexuality.

This could make it think that it is a topic that can not be talked about, that is, a taboo subject thus triggering negative thoughts and therefore heterosexual values ​​are the dominant ones. So from the schools without being aware, it is helping to maintain the discrimination that allows this type of bullying (Mendez, 2015).

If schools want to reduce h0m0phobic bullying, it should be addressed in a real way, with active policies that introduce a diverse sex education in the curriculum, where everyone regardless of their gender identity and sexual orientation is reflected.

Some reasons to work in that direction are the following:

Finally, we have to say that not only should the school be in charge of fighting against this type of bullying, but the family also has an active role and we are responsible as parents.

Speaking at home with young people since they are young is one of the first steps to contribute to a more tolerant society and transmit values ​​of respect towards this and other groups.

The society has a responsibility against bullying and h0m0phobic bullying. We must reflect with ourselves on how we act and what we usually say about sexuality in order to @nalyze if we are unconsciously also collaborating in h0m0phobic attitudes.

On the other hand, young people are in a society with a lot of information thanks to new technologies, but they still do not have the capacity to be critical of them and they do not know who to ask for help since from the schools they are not receiving a sexual education, topic that at home they will not address either because of the fear or shame that they feel.

So we find that young people still have the problems they have always had, do not know who to go to learn more about a particular issue in a world full of references to sexuality, consumption and sex.

Also Read: 13 Advantages and Disadvantages of Television in Children

As educational professionals and family members, we are responsible for providing the necessary information to young people, providing them with skills and resources so that they can face bullying and h0m0phobic bullying in order to reduce or mitigate it.