Knowing how to read the eyes of a person – woman or man – can be a great advantage. Especially a part of the eyes, the pupils, not only serve to let light pass to the internal receptors, but can also signal what passes through our mind.

It is often said that the eyes “are the window of the soul” and can say a lot of a person. So much is the importance of the eyes to interact with other people, according to a University of Miami study, 43.4% of the attention we give to another person, focuses on their eyes.

How to Read a Person’s Eyes

“The thoughts of a person can be determined by looking at his eyes ” – England, Regiment of Life, 1545.

11 keys to get to know someone better from your eyes

Especially in Western culture, it is expected that there is some degree of eye contact. If it is too persistent, it is considered intimidating or aggressive and causes the person to whom the gaze is directed to feel uncomfortable.

This occurs even with animals of different species; If you find an aggressive dog it is best that you do not look directly into the eyes as it will feel threatened and may attack.

On the other hand, persistent contact can be a sign of attention to the messages of the interlocutor. On the contrary, if a person tries to deceive someone, it is possible to avoid eye contact. In this article I explained how to know if someone lies .

Avoiding looking into another person’s eyes may be a sign of embarrassment for some reason. Also, avoiding contact with another person often means being angry with them.

You also have to keep in mind, that the contact time depends on the culture. For example, in New York 1.68 seconds is perceived as an acceptable time.

Emotions towards another person can alter the frequency of blinking. Blinking more than 6 to 10 times a minute can be a sign that that person is attracted to the caller.

Also, blinking more may indicate that the person feels nervous. Since 1980, in the presidential debates, the person who has blinked the most has lost.

4- Direction of the look

From the direction in which the eyes look, much has been written since the beginning of NLP . According to this model of communication, looking to the left indicates that something is being remembered.

On the other hand, looking to the right indicates that they are generating thoughts or images, which some interpret as being lying, although I would take it with much caution.Note: with left handed people it is the other way around. 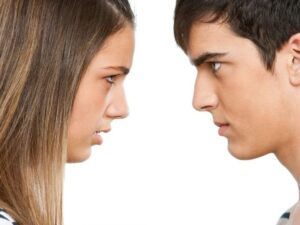 Squinting means suspicion or disbelief and is a gesture that is often unconscious.

People raise their eyebrows when they want to make themselves understood better. He also notes sympathy, empathy and desire to get along with the other person.

People who are rich, high status or who want to show superiority, tend to maintain less eye contact. Looking elsewhere in a conversation is another way of expressing superiority.

Related : What is social influence?

In flirtations and seduction there seems to be agreement that:

-If you initiate eye contact, the other person will probably feel welcome and respond positively.

-If you initiate the contact and the other person does not respond, you may not be interested. If you watch her after he / she looks away or refuses to look, you will make her uncomfortable.

– The boys can take into account the following: 1) if a girl looks you in the eyes, then looks down and finally returns to your eyes, surely this interested, 2) if you break the eye contact and look at the side, not There is nothing safe and 3) if you look up after making eye contact, you probably are not interested.

-For girls who want to seduce with the look: a man needs to average three looks of a girl to begin to realize that he feels interested.

Since the size of the pupils cannot be controlled voluntarily, you can know or at least infer what the other person thinks through observation. Regarding the pupils there are several interesting points:

– They dilate when we experience pain.

“If the police stopped your car at night and pointed you in with a flashlight, you have a reason.” Some drugs, such as alcohol or opioids, cause pupils to contract. Others, such as methamphetamine , LSD, or cocaine, cause it to dilate. The policemen usually check this and if they have experience they will know when they are contracted less than 3mm or dilated more than 6.5 mm.

10- Personality: how to read the iris of the eye

This may seem strange to you, although this has been demonstrated by a study by Larsson and others in 2007.

If you look at the iris, the colored part of the eye, you can see some characteristics of the personality of the person.

It seems that the responsible for this is the gene Pax6 that affects brain regions that influence the behavior and in turn causes changes in the iris.

As you may have noticed, dilation of the pupils usually has a positive meaning and a negative contraction. However, it is very important to take into account the situation; For example the luminosity.

According to the studies, changes in the size of the pupils are very difficult to detect, although it seems that we are more capable of being unconscious.

Therefore, changes in pupil size could be experienced unconsciously along with other non-verbal behaviors.