Being a non-invasive technique, it is not necessary to open any wound to perform it and it is also painless. Its spatial resolution allows identifying structures to the millimeter, it also has a good temporal resolution, inferior to the second, although this is not as good as other techniques, such as electroencephalography (EEG).

Its high spatial resolution allows investigating aspects and morphological characteristics at the tissue level. Like metabolism, blood volume or hemodynamics.

This technique is considered innocuous, that is to say, it does not produce any damage in the organism of the person to whom it is made, for this reason it is also painless. Although, the participant must enter a magnetic field, this does not pose a risk to the individual, since this field is very small, usually equal to or less than 3 teslas (3 T).

But not all are advantages, the RM is a difficult technique to perform and @nalyze, so professionals must perform a prior training. In addition, expensive installations and machinery are necessary, therefore, it has a high spatial and economic cost.

Being such a complex technique, a multidisciplinary team is necessary to use it. This team usually includes a physicist, someone who knows physiopathology (like a neuroradiologist) and someone who designs the experiments, for example, a neuropsychologist.

In this article the physical basis of magnetic resonance will be explained above, but it will focus mainly on the psychophysiological bases and practical information for people who have to undergo an MRI test.

Brain functioning is based on the exchange of information through chemical and electrical synapses.

To perform this activity, it is necessary to consume it, and the energy consumption is carried out through a complex metabolic process that, in short, translates into an increase of a substance called adenosine triphosphate, better known as ATP, which is the source of energy that the brain uses to function.

ATP is made from the oxidation of glucose, therefore, for the brain to work requires oxygen and glucose. To give you an idea, a brain at rest consumes 60% of all the glucose we consume, approximately 120 g. So if the glucose or oxygen supply were interrupted, the brain would suffer damage.

These substances reach the neurons that require them by means of blood perfusion, through the capillary beds. Therefore, the greater the brain activity, the greater the need for glucose and oxygen, and with an increase in cerebral blood flow in a localized manner.

So to check which area of the brain is active, we can look at the consumption of oxygen or glucose, the increase in regional brain flow and changes in cerebral blood volume.

The type of indicator to be used will depend on multiple factors, among which are the characteristics of the task to be performed.

Several studies have shown that when brain stimulation occurs for a prolonged period, the first changes observed are glucose and oxygen, then there is an increase in regional cerebral flow, and if the stimulation continues, there will be an increase of total brain volume (Clarke & Sokoloff, 1994, Gross, Sposito, Pettersen, Panton, & Fenstermacher, 1987, Klein, Kuschinsky, Schrock, & Vetterlein, 1986).

This balance produces a magnetic change in the brain that is what is collected in the MR images.

As is known, intravascular oxygen is transported bound to hemoglobin. When this protein is full of oxygen, it is called oxyhemoglobin and when it is released, it becomes deoxyhemoglobin.

During cerebral activation there will be a locoregional increase in arterial and capillary oxyhemoglobin, however, the concentration of deoxyhemoglobin will decrease due, as explained above, to the decrease in tissue oxygen transport.

This drop in concentration of deoxyhemoglobin, due to its paramagnetic property, will cause an increase in signal in the fMRI images.

In summary, the MRI is based on identifying the hemodynamic changes of oxygen in the blood, through the BOLD effect, although blood flow levels can also be inferred indirectly through methods such as imaging and perfusion and ASL ( arterial spin labeling ).

The MRI technique most used today is the one done based on the BOLD effect. This technique allows identifying the hemodynamic changes thanks to the magnetic changes produced in the hemoglobin (Hb).

This effect is quite complex, but I will try to explain it in the simplest possible way.

If you want to know more I advise you to see the following presentation:

The first to describe this effect was Ogawa and his team. These researchers realized that when Hb contains no oxygen, deoxyhemoglobin, is paramagnetic (attracts magnetic fields), but when fully oxygenated (oxyHb) changes and becomes diamagnetic (repels magnetic fields) (Ogawa, et al ., 1992).

When there is a greater presence of deoxyhemoglobin the local magnetic field is altered and the nuclei need less time to return to their original position, so there is a lower T2 signal, and conversely, the more oxiHb the slower the recovery of the nuclei and minus signal T2 is received. 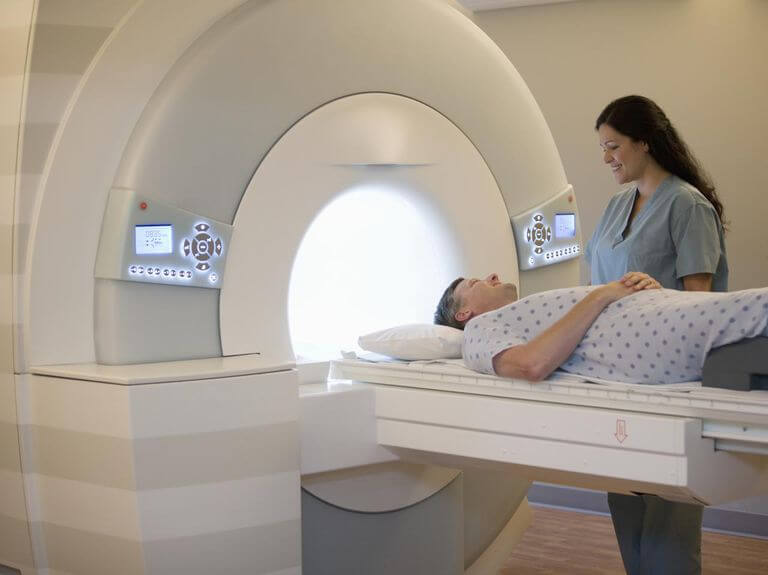 In summary, the detection of brain activity with the mechanism of the BOLD effect occurs as follows:

The exercises consist of two parts, during the first the participant performs the task and then is left to rest at the time of rest. The fMRI @nalysis is carried out by comparing voxel to voxel the images received during the performance of the task and at rest time.

Therefore, this technique allows relating the functional activity with the cerebral anatomy with a high precision, something that does not happen with other techniques such as EEG or magnetoencephalography.

Although fMRI is a fairly precise technique, it measures brain activity indirectly and there are multiple factors that can interfere in the data obtained and modify the results, either internal to the patient or external, such as magnetic field characteristics or post-processing.

This section will explain some information that may be of interest if you have to participate in an MRI study, either patient or healthy control.

MRI can be performed in almost any part of the body, the most common are the abdomen, cervical, thorax, brain or cranial, heart, lumbar and pelvis. Here the brain will be explained since it is the closest to my field of study.

How is the test carried out?

The MRI studies should be carried out in specialized centers and with the necessary facilities, such as hospitals, radiology centers or laboratories.

The first step is to dress appropriately, you must remove all the things you have of metal so that they do not interfere with the MRI.

Then you will be asked to lie on a horizontal surface that is inserted into a kind of tunnel, which is the scanner. Some studies require you to lie down in a certain way, but, usually, it is usually upside down.

While the MRI is performed you will not be alone, the doctor or the person who controls the machine will be placed in a room protected from the magnetic field that usually has a window to see everything that happens in the MRI room. This room also has monitors where the person in charge can see if everything is going well while the MRI is being performed.

The test lasts between 30 and 60 min, although it can last longer, especially if it is a fMRI, in which you must perform the exercises that you indicate while the MRI collects your brain activity.

How to prepare for the test?

When you are told that an MRI test should be performed, your doctor should make sure that you do not have metallic devices in your body that could interfere with MRI, such as the following:

In addition, you should tell the doctor if you have worked with metal since you may need a study to examine if you have metal particles in your eyes or nostrils, for example.

You should also notify your doctor if you suffer from claustrophobia (fear of confined spaces), since, if possible, your doctor will advise you to perform an open MRI, which is more separated from the body. If it is not possible and you are very anxious, you may be prescribed anxiolytics or sleeping pills.

The day of the test should not consume food or drink before the test, approximately 4 or 6 hours before.

Must try to take the minimum of metal things to the study (jewelry, watches, mobile, money, credit card …) as these can interfere with the RM. If you take them you will have to leave them all outside the room where the RM machine is located.

The MRI exam is completely painless, but it can be a bit annoying or uncomfortable.

First of all, it can cause anxiety when you have to lie in a closed space for so long. In addition, the machine must be as still as possible because if it cannot cause errors in the images. If you are unable to stand still for such a long time, you may be given some medication to relax you.

Secondly, the machine produces a series of continuous noises that can be annoying, to reduce the sound you can wear earplugs, always consulting your doctor beforehand.

The machine has an intercom with which you can communicate with the person in charge of the exam, so if you feel anything that seems abnormal can consult it.

It is not necessary to stay in the hospital, after the test you can go back home, eat if you wish and make your normal life.

What is it done for?

MRI is used, along with other tests or evidences, to make a diagnosis and to evaluate the condition of a person suffering from a disease.

The information to obtain depends on the place where the resonance will be performed. Brain magnetic resonances are useful for detecting brain signs characteristic of the following conditions:

In addition, it can also be useful to determine the cause of conditions such as:

Do you have risks?

Magnetic resonance uses magnetic fields and, unlike radiation, has not yet been found in any study that causes any kind of damage.

Contrast MRI studies, which require the use of a dye, are usually performed with gadolinium. This dye is very safe and allergic reactions rarely occur, although it can be harmful to people with kidney problems. Therefore, if you suffer from any kidney problem, you should inform your doctor before carrying out the study.

Magnetic MR imaging can be dangerous if the person carries metal devices such as cardiac pacemakers and implants since they can not make them work as well as before.

In addition, you have to conduct a study if there is a risk that you have any metal shavings inside your body since the magnetic field can cause them to move and cause organic or tissue damage.