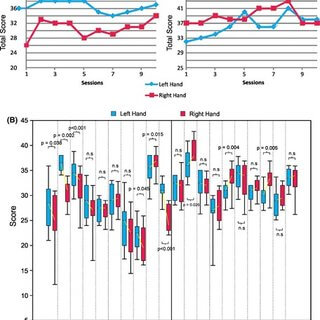 Often many parents wonder at what stage or moment of development children acquire a clear manual dominance , since in  some cases they usually show a marked preference for the use of one of their hands to point or take toys while in many other cases  this It is quite variable.

The maturation of different brain structures and the development of motor functions will be essential for the establishment of manual preference.

In the world population, right-handed people represent between 85-90% of the total, while left-handed people constitute 10% -13%. In many cases manual dominance  is not absolute, so there is at least 1% of ambidextrous people.

Although there is a wide variety of explanatory theories, the research body regarding liberality and cerebral asymmetry has  consistently demonstrated that there is a certain hemispheric specialization for the processing of information and that this  fact is also a maturation indicator cerebral.

Thus, the right hemisphere seems to be biased toward emotional, attentional, visuospatial processing and control of the contralateral part  of the body (left).

In this sense, the right-handed would present a hemispheric left representation of language and control of the dominant hand, so it would be expected  that in the case of left-handers this representation would be inverted in the right hemisphere.

However, the use of different research techniques such  as the use of the Wada Test or the FMR, have revealed that approximately only 15% of left-handed individuals have a  right linguistic representation. It is usually considered that left-handers have a higher probability of recovering from language disorders, because of the  greater probability of presenting a bilateral hemispheric organization of language.

At what time is it identifiable?

In relation to the development of cerebral laterality and consequently of manual dominance, different explanatory theories have been proposed.

The  first debates proposed the progressive development of hemispheric specialization and the existence of functional equipotentiality at the time  of birth. However, others propose the presence of asymmetry from birth.

On the other hand, we have also described the preferred rotation of head to the right of babies of  right-handed parents, the right hand preference in children who will be distros from 18 months.

From very early stages, different patterns of manual preference can be identified, from the way the fetus’ finger is sucked during the gestation stage  , to postural asymmetries around 2 or 3 months. Being between 3 and 6 more evident the manual preference for the handling of  objects.

Exclusive use or very marked preference for one hand in infants in less than a year can make us suspect the existence of a developmental  disorder such as cerebral hemispheric involvement, trilateral to the preferred hand. However, when this use fluctuates  throughout the first years of life we ​​would interpret it as the normal pattern of development.

In general, it is expected that children alternate the use of their hands for the performance of motor acts in an indistinct manner. It is not until 4  years of age, when manual dominance is defined.