My name is David Garrison Diaz and on December 8, 2005 I had a serious motorcycle accident. What was considered as a pleasant holiday with friends, riding motorcycle and food together, became the worst day ever imagined.

This accident had many consequences in my life. It happened on a mountain road where the curves predominate and in one of them, without symptoms that could predict the tragic event, my motorcycle lost traction in the rear wheel and I rushed against the metallic support that is in the edges of the road). I could not see the sensations after hitting the sharp metal, what I remember is lying next to a creek watching the road high above me. I could not move and the instinct of survival made me scream to be found. I felt an unbearable pain in my right leg but did not know what happened because I could not move, could not incorporate to look at me. Fear invaded me when the possibility that my inability to move was due to a serious back injury appeared in my head, but little by little the fear was abolished and covered by the pain of my leg. I knew it was something serious because of the faces of my friends and people coming down to help me. At last, after waiting 45 long minutes, the ambulance carrying the morphine arrived, which allowed me to disconnect?

After waking up in the Intensive Care Unit and after thirteen days in an induced coma, I learned that the tremendous pain in my leg was due to the fact that I had been drastically amputated in the accident. From that moment I entered a state of shock and deep sadness. A doubt filled me as the days passed. How was my life to be from then on? And without being too aware of what I was facing, I began a new stage in my life marked by a situation of mourning with drastic consequences for me and many moments of pain that no human person should feel.

It was after almost four months of being in the hospital when I started to look for my own way, understanding that I had to change my way of living, both for my new physical impediments and for the immense curiosity that was invading me to learn the message of life for me with such a traumatic episode. I began to experiment and try different tendencies in which I found something in each one of them.

And it is now when I can say that the most help I found was in meditation, being just what I want to relate in this text. But I will not continue without saying that, I am writing these lines with my second son in my laps, with the MTB Andalusia cycling champion medal hanging between my conquered treasures, developing my vocation for work and knowing how to live with what touches me every moment, in many ha  ppy moments of life.

The seven issues that most helped me in meditation were:

Mental calm. The time in the hospital without being able to move me out of bed was terrible because of the laps I could get to the head. In many of them I slept as a mental rest system. When he left the hospital, he did not stop recreating a thousand different endings when he went through the curve. When I learned to meditate and to control my thoughts, this amount of ideas was reduced until disappearing almost completely, helped also by the acceptance of my error. It was a great break to stop torturing me with that moment.

Peace and tranquility. Every time I became nervous or I was afraid because I was facing a new situation, whether to go back to learning to walk, to put on a prosthesis, to teach my prosthesis or to try again what I can do and what not, meditation brought me that a point of tranquility that allowed me to confront all these situations in a much more beneficial and beneficial way.

Reduce physical pain. During the time I was in the hospital, the pains were controlled with morphine patches, but when I was discharged I was not prescribed the patches because the intensity of the pain had dropped. However, we did not have the great pain that resulted in rehabilitation and adaptation to the prosthesis. I remember arriving one day crying at my house in the ambulance for the pain I had in the stump. The meditation of pain helped me a lot with this, to the point of not needing painkillers to take the pain. 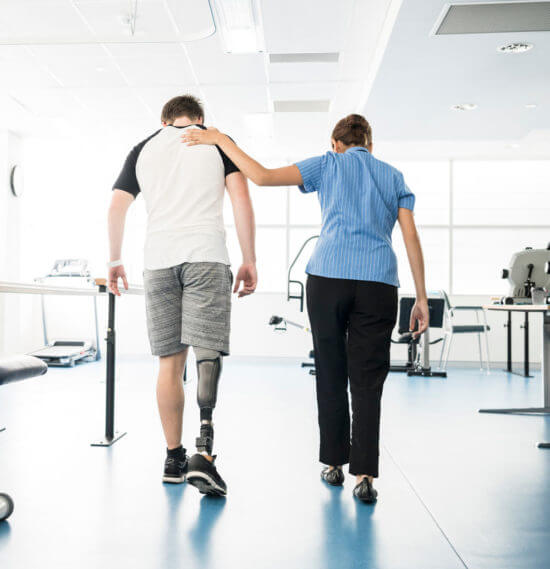 Remove pain from the phantom limb. This is a pain that appears in amputees and consists of feeling the member that you no longer have. When what you feel is tickling or itching is funny, but when you feel pain it is very unpleasant. In addition, it has the peculiarity that there is no medication that removes it, only in some cases reduces it. And here is the greatest contribution that meditation had in me, since it helped me to accept my loss and only thus did these pains so little explained by medicine disappear.

Build strength and confidence in myself. In the process of recovery there were many moments when I thought I would not get it, that my life would be unhappy. This is the result of giving too much space to catastrophic fantasies. Whenever I saw that they invaded me I began to meditate and, little by little, the periodical of those thoughts was reducing until almost did not appear.

Sustaining sadness. The moments of sadness and sorrow were many and nowadays in my life they continue to appear although for other reasons. Meditation allows me not to flee from those moments, to live them as they are and to cry if I need them. This gives me a peace of mind about the sadness that allows me to live it in a very different way to how we usually do it.

In short, all of the above has brought me greater happiness; or rather less prevents me from being happy. Meditating I feel in favor of life, I feel that things are as they have to be and, without doubts, to have less fight there is more joy and enjoyment of life, what we call happiness.

Some may think that they are not in a situation as delicate or critical as mine, or that meditating is very difficult, or even someone cannot believe what I tell in these lines. I only invite you to try, you do not lose anything, but yes, we are not talking about magic, if you are going to give it a chance to do it right, that it is not just the fruit of a day.

And the most amazing thing is that to meditate you only need you and at least 10-15 minutes of your day, being really in your hands the many possible benefits of meditation.