The term myelodysplastic syndromes (MDS) encompasses a type of bone marrow cancer in which the immature blood cells are unable to mature into healthy, adult blood cells.

This type of disease is usually detected in the rudimentary blood tests that we do to check that everything is going well because, in the beginning, the symptoms are not noticeable. That is why it is so important to perform @nalytics periodically.

The main symptoms that patients notice, once this disease has progressed, are the problems to breathe and the feeling of continuous tiredness.

The life expectancy of people suffering from MDS is very heterogeneous since it depends on the type of specific syndrome as well as other factors such as age or the substances to which they have been exposed in their life (chemical substances, heavy metals.)

To understand what myelodysplastic syndromes are, we must first know what the normal functioning of the bone marrow and blood cells is.

In healthy people, the bone marrow contains stem cells that can mature into blood cells, among others.

The myelodysplastic syndrome is characterized because the myeloid stem cells are not able to mature in adult blood cells such as red blood cells, platelets and white blood cells and remain in an intermediate state of maturity, forming cells called blast cells.

The blast cells do not work as they should and they have a very short life, dying shortly after leaving the blood or in the same bone marrow, leaving little space for healthy cells that have been able to mature.

When the level of healthy blood cells falls drastically the person can suffer problems such as infections, anemia or frequent bleeding.

Normally the symptoms of these syndromes are not noticed until the person has been with the disease for some time. Although each syndrome has different characteristics, they all share the following symptoms:

The WHO (World Health Organization) differentiates the following syndromes:

Between 5 and 10% of patients suffering from myelodysplastic syndrome have a refractory cytopenia with unilinear dysplasia (RCUD).

The term RCUD encompasses a group of myelodysplastic syndromes in which only one type of blood cell is affected, while the other types remain normal. Also, not all blood cells of that type are affected, there are only problems in about 10% of the cells (dysplasia).

The following syndromes are included in this group:

Sometimes an RCUD can degenerate and become an acute myeloid leukemia, but it is not very frequent, normally patients with RCUD live for a long time and with a good quality of life.

Between 10 and 15% of patients suffering from some myelodysplastic syndrome have refractory anemia with ringed sideroblasts (RARS).

This syndrome is very similar to refractory anemia, only red blood cells are affected. With the difference that in the immature red blood cells present in the RARS iron deposits can be observed around their nuclei, forming rings, so these cells are called ring sideroblasts.

In rare cases, RARS can degenerate into leukemia and it is normal for patients to live for a prolonged period of time.

This is the most common type of myelodysplastic syndrome, around 40% of patients with DS have a refractory cytopenia with multilineage dysplasia (RCMD).

The RCMD are characterized because at least two types of blood cells are affected, while the others are intact, and the number of blasts in both the blood and the marrow is normal.

In approximately 10% of the cases of patients with RCMD this ends up degenerating a leukemia. Unlike the two previous myelodysplastic syndromes, patients suffering from this syndrome have a short life expectancy, it is estimated that about half of patients die within 2 years after the diagnosis was established. 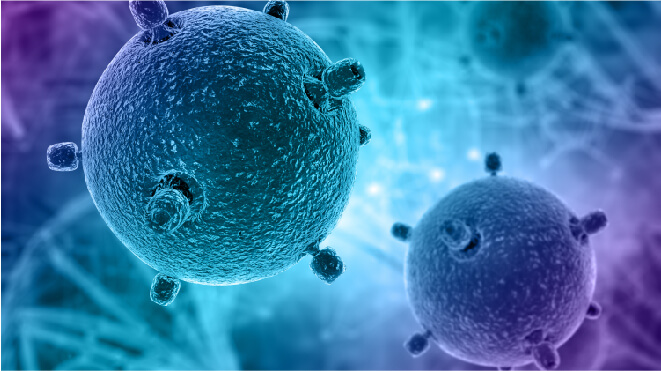 This type of anemia is characterized because one or more types of blood cells are affected, which are found at very low levels in both the blood and the bone marrow.

In addition, there is an excess of blasts in the bone marrow, although they usually represent less than 10% of blood cells. The blast cells do not contain Auer sticks, which is a waste material.

Many patients with RAEB-1 end up developing acute myeloid leukemia, approximately 25%. The life expectancy of people suffering from RAEB-1 is approximately 2 years, as are those who suffer RCMD.

RAEB-2 is very similar to RAEB-1, with the difference that in the first the number of blastocysts in the bone marrow is greater, being able to make up to 20% of the blood cells of the marrow.

They also differ in that there is an excess of blastocysts also in the blood, where between 5 and 19% of white blood cells have not been able to mature and have remained blastocysts. These blast cells may contain Auer rods.

The probability that a patient with RAEB-2 will end up developing acute myeloid leukemia is very high, approximately 50%. Therefore, patients with this syndrome have a poor prognosis.

The main characteristic of this myelodysplastic syndrome is that the chromosomes of the blood stem cells lack chromosome 5 and this leads to their development in an abnormal way.

Patients with this syndrome do not usually develop leukemia and have a favorable prognosis with a long life expectancy.

It’s syndrome is the least common of all myelodysplastic syndromes. MDS-U is diagnosed as any syndrome that meets the criteria of an MDS, with abnormal blood cells, but does not meet the criteria for any particular type of MDS.

Within this group, patients with very different characteristics are included, which makes it difficult to establish a general prognosis.

There are factors that can increase the likelihood of having a myelodysplastic disorder, such as the following:

Although it is known that these risk factors influence the onset and development of the disease, the cause of myelodysplastic syndromes is not known in the majority of cases.

There are different types of treatments to treat myelodysplastic syndromes. The choice of a specific treatment depends on multiple factors among which is for example the type of damaged cell or the symptoms of the patient.