The ophidophobia is the irrational, intense and persistent fear of snakes. Such is the fear for this reptile that only the idea of ​​seeing a picture or a toy can lead to an uncontrollable panic attack.

It is the second most common phobia in the world, affecting approximately 10% of the population. In addition, it is believed that up to 1/3 of human beings suffer from some kind of fear by snakes.

Whether because of the black legends that have been told about them, his hissing on the floor stealthily, his disturbing gaze, which some are poisonous or the whistle reproduced with his tongue, many people suffer real chills just thinking that they are close of one of them. Fortunately, this mental inability to remain calm has treatment.

In addition to developing the possible therapies, we will address the root of the problem, trying to understand its causes and what are the possible consequences of suffering from this disorder.

The ophidophobia comes from the Greek word “ophis”, which means snake and “phobos”, fear, hatred. That is, the fear of snakes in a persistent and excessive way.

It is important to clarify that having a certain repulsion or fear of these reptiles does not imply a phobia. Even if it is considered a disorder, it must be an unjustified fear that is within what is considered normal.

The ophidophobia is included in the herpetophobia (fear of reptiles) and this in turn to zoophobia (irrational fear of animals). The arachnophobia, bufonofobia, entomofobia, cynophobia or motefobia are other phobias that are included in this great section.

Symptoms may vary depending on the degree of dread felt by snakes. Some individuals will experience some discomfort when exposed to a reptile while others will develop conditions that affect their health more.

This will be determined by the mental state and other characteristics related to the affected person. According to the American Psychiatric Association (APA), some of the most common symptoms are:

Sometimes, ophidhophobia can affect a person’s normalcy considerably. This would avoid spaces conducive to the habitat of a snake (parks, lakes, zoos, forests, etc.) or would put too much effort into ensuring that your home is free from unexpected visits.

Only 10% of snakes can have a real danger to humans. So, what makes us so panic and cause this disorder in certain people?

The snake is an animal full of symbolism that has been linked throughout history to concepts as negative as evil or the devil himself. The Bible itself, through the story of Adam and Eve, portrays the serpent as a petty animal and akin to the devil.

This popular culture remains intrinsic in the human mint, which through ignorance is not able to distinguish the mythological from the real.

They occur mostly in childhood. If he was a witness or victim of a snake attack or exposed to any disturbing or violent trigger, this can trigger a trauma that leads to ophidhophobia.

The evolutionary cause is very present for many scientists. These defend that animals like snakes were an annoyance for our primitive ancestors, which developed some alertness and visual acuity before the movements of the reptile.

In an article by Isbell (2006) in the journal Seed Magazine, the possible impact that has occurred on the brains of certain mammals such as monkeys or humans, in coexistence with the snake is collected.

Most controversial point. While some scientists believe that owning family members with ophidophobia can promote the fact that you suffer from it, others refute it arguing that it is simple family conditioning. 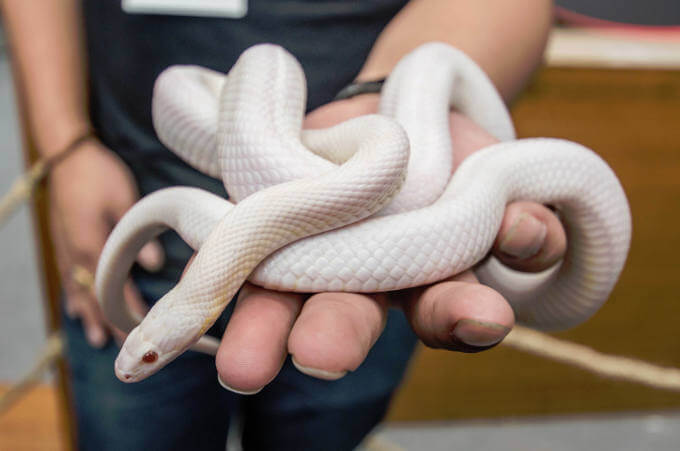 At this point, we should insist that you have to make sure that the fear you suffer for a snake is truly a phobia. For this, the Diagnostic and Statistical Manual of Mental Disorders (DMS) of the APA, collects the requirements that must be suffered to suffer from this disorder:

Recognized these symptoms, if it is necessary to go to a professional to determine what type of treatment is most appropriate to combat this suffering. Some of the most common and effective therapies are:

As its name suggests, the objective of this therapy is to expose oneself gradually to the being that creates fear. This will establish a safe and controlled environment, in which the patient can feel more comfortable. It is also known as a desensitization technique.

In this case, the patient will be gradually exposed to a snake photo, a toy that imitates the figure, a death snake and a living snake at a distance. The idea is that when the time comes, the affected can touch the animal and even hang it by the neck. If you can stay calm, the brain can control fear and anxiety.

Also known as Cognitive-Behavioral Therapy. It aims to vary the negative thinking that is had about the snake to eliminate any sign of fear or panic in the subject. For this, it relies on biofeedback or relaxation techniques.

The purpose of relaxation techniques is to provide the affected with certain skills and techniques to maintain calm in states of anxiety. Meditation classes, controlled breathing or exercises related to positivity are carried out in order to achieve mental and physical tranquility voluntarily.

Only recurrent to severe cases. The intake of antidepressants (SSRIs) or anxiolytics can substantially improve the symptoms produced by this disorder, but a prolonged use of them can lead to an addiction or other side effects.