The Oxytocin is a hormone that acts as a neurotransmitter, stimulating our neurons involved in the regulation of mood , affectionate, the willingness to establish new social relations and sexual behavior, among others.

And is that, apart from modeling these aspects, it is interesting to highlight the role it has during the physiological processes that occur at the time of delivery. Oxytocin is released potentially leading to contractions, and subsequently, secreting breast milk.

Also, it is interesting to note that the role of this hormone at the time of delivery and its good evolution is also the responsibility of the fetus and its particular production of this hormone.

This aspect makes us understand a little more the strength and the maternal-filial bond that is created from the moment of the birth of the baby.

How is oxytocin released and act?

Oxytocin is produced by the pituitary gland and is regulated by the cells of the hypothalamus, which from its position in the center of the brain, is responsible for controlling and regulating each of the hormonal glands, sending nerve impulses to the brain.

Then, when oxytocin passes through the bloodstream, in the amygdala of the brain there will be a series of favorable reactions for behavior, encouraging social and sexual patterns and parental behavior, as I mentioned earlier.

Oxytocin symbolizes the love hormone par excellence, contact and sexuality. Thus, only its release is favored when there are situations related to these conditions. Therefore, making love, giving a hug or a caress, are key examples to activate the production of oxytocin.

On the contrary, the hormone known as adrenaline , inhibits oxytocin. Adrenaline is released by the organism of all mammals in situations of alertness or emergency: moments of panic, danger or blockage. In this way the production of hormones is regulated naturally, based on specific situations.

The levels of oxytocin depend in turn on other hormones and also influence the production of others such as estrogen, dopamine, serotonin, prolactin and endorphins.

The prolactin for example , is directly involved in the process of breast development, milk production and baby care. Dopamine, on the other hand, focuses its attention on what we call positive reinforcement, which induces the subject to repeat the same pattern of action with which this reward is achieved. Finally, endorphins, are responsible for providing a relaxing effect thus reducing high levels of stress and / or anxiety.

What effects does oxytocin produce?

Next, I will talk about 7 key aspects where the effects of oxytocin can infer differently in human behavior. And the role of this hormone goes beyond love:

The release of this hormone in the brain of women during sexual intercourse, favors the proliferation of stable relationships. In fact, there are studies that show a high rate of oxytocin in people who say they are in the initial infatuation stage.

In the case of nursing mothers, oxytocin is also involved in the secretion of milk, acting from the  mammary glands . The suction that the baby makes in the nipple is transmitted to the hypothalamus, inducing the producing neurons to manufacture oxytocin so that it is done.

It is known that babies respond to the vocal stimuli they perceive from their mothers, causing a great emotional attachment between both. Therefore, when a child is in a situation of emotional stress caused by different factors, the sound stimulus that comes from the mother’s voice activates the production of oxytocin, generating peace and tranquility.

Oxytocin secreted in certain situations produces a sense of calm in our body. On the other hand, as explained by the researchers in the journal The Journal of Neuroscience , it is known that oxytocin promotes pro-social behavior.

This hormone has a direct influence on the amygdala (brain region responsible for social interactions and the identification of emotional threats). Thus, the amygdala plays a fundamental role in the processing of emotional reactions. 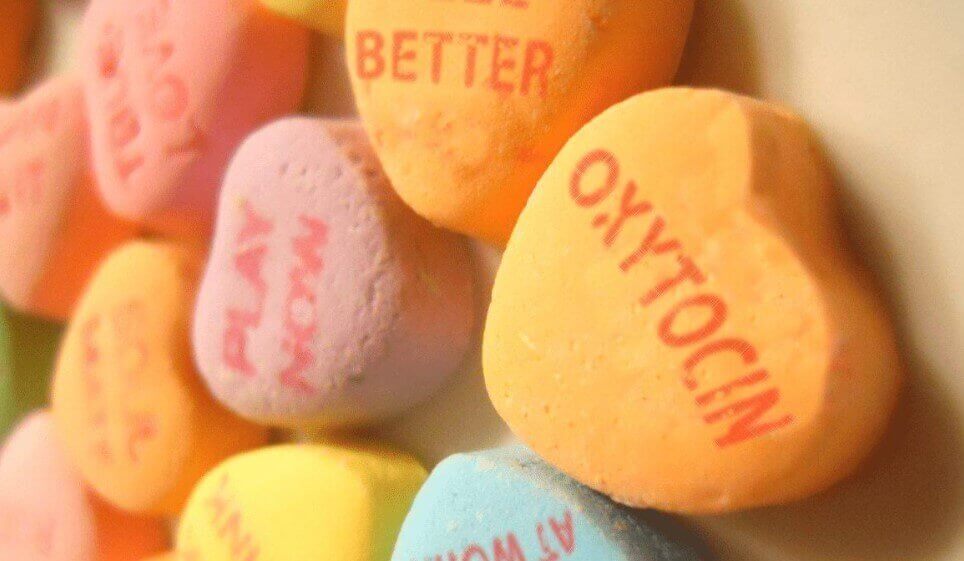 Studies have been found, which claim to have found reduced levels of Oxytocin in the plasma of children with Autism Spectrum Disorder (ASD). It should be added that later another study conducted after the administration of intravenous Oxytocin, determined that it helped adults with autism, to retain the concept of knowing how to evaluate the emotional meaning according to the different speech intonations (sadness, happiness, anger, ..) .

Oxytocin could be the solution to the control of severe addictions caused by excessive consumption of alcohol and other drugs, according to a latest study from the University of Adelaide (Australia).

The study is based on the thesis that addictive behavior could be associated with a weak development of the hormonal system of oxytocin during early childhood. Babies are born with oxytocin levels, created as a result of maternal-infant bonding.

However, these levels continue to grow until 3 years, being at the mercy of various influences. In this way, oxytocin could reduce the pleasure sensation that drugs offer and the abstinence caused by the lack of consumption, if the oxytocin system has developed correctly.

It has been proven that the contribution of oxytocin to treat states of anxiety and stress, could be useful in the treatment of people with anorexia, since it inhibits the obsessive tendency, in this case, with the physical.

1- Oxytocin and infatuation Cause or consequence?

There are several studies that have determined the bidirectional relationship between brain activation and hormonal secretion.

In this way, we stop to think that just as oxytocin produces certain feelings or sensations in us, we could also be those that provoke the release of oxytocin through certain affective acts.

Thus, physical contact with a person increases oxytocin levels, even if it is not a contact for sexual or love purposes. Practicing other activities such as yoga, eating something that we like or even petting our pet, also make us release oxytocin.

“A good kiss works like a drug,” says Sheril Kirshenbaum, a researcher at the University of Texas and author of “The Science of Kissing ,” the book detailing what happens in our bodies and our brains when we kiss.

Next, I will detail how our brain experiences the reactions and sensations unleashed by this physical approach, through the chain action of various hormones related to each other:

Euphoria is the result of the action of this neurotransmitter associated with pleasure. Dopamine levels are triggered while we kiss, and can be equated to certain obsessive thoughts associated with an infatuation in its initial phase, producing in our brain sensations comparable to those of an addiction.

It is a neurotransmitter responsible for regulating emotions and transmitting information to the cerebral cortex . It is related to sexuality and intrinsically influences moods.

It is a substance that is secreted through the adrenal glands , accelerating the heart. The adrenaline rates shoot up in the body, when we perform some risky sport, such as bungee jumping  or parachuting.

As an annotation, it is worth highlighting a curiosity extracted from a psychological study conducted by the psychologist John Bohannon, where 90% of the respondents claimed to remember the details of their first romantic kiss. The first kiss, says Bohannon, leaves a more indelible mark than the first time love is made ??.

Dopamine levels decrease when the first stage of infatuation passes. Thus, Oxytocin becomes the guarantee of success in the couple, as it reinforces the bond between two people.

There is research that shows that oxytocin makes people more extroverted.

The most introverted people often find certain social encounters stressful. Christmas parties seem endless meetings and even a first date makes them feel in the spotlight as if they were in a job interview.

That discomfort can lead to poor performance in the exercise of social interaction, leaving a bad impression and even make other people feel uncomfortable. And we have all experienced those kinds of moments in which we feel out of place or socially awkward.

Oxytocin, a natural hormone released after childbirth or during social relationships, has been investigated for its impact on human behavior.

Marcos Ellenbogen, Chair of Research in Psychopathology of Development of the University of Concordia and member of the Human Development Research Center, carried out a study where he shows that the administration of oxytocin via nasal can change the way of perceiving oneself, leaving aside, the introversion and stress caused by the direct confrontation with diverse social environments.

The study was conducted with 100 men and women between 18 and 35 years. The sample consisted of healthy adults, non-smokers, with no history of mental illness and without consumption of any type of medication. The researchers asked the subjects to inhale oxytocin from a nasal spray. Subsequently, subjects completed a questionnaire about how they felt 90 minutes after inhalation. The participants were evaluated on:

The researcher Christopher Cardoso, a graduate student in the Department of Psychology of Concordia and a member of the Human Development Research Center, concluded:

“The participants who were treated with oxytocin intranasally had higher scores in terms of the degree of extroversion and the predisposition to live novel experiences than those who received a placebo.

The study is based on previous experimental research in Concordia that has shown that the administration of oxytocin via intranasal can influence how people perceive their ability to cope with difficult circumstances.

Oxytocin turns out not to be as good as we thought. A small scientific study maintains that it induces people to tell lies:

The participants selected for the present study, should try to predict the outcome of a coin (face or cross), and then receive a positive reinforcement for the amount of successes they declare themselves.

As we have seen throughout this article, oxytocin has diverse and curious ways of reacting in our brain, transporting its results to our way of behaving and understanding human relationships.