This disorder, in its most frequent form, produces episodes of pain and numbness in the extremities, especially in the hands and feet. Likewise,  people suffering from some type of peripheral neuropathy describe the presence of burning or constant tingling sensations in the affected areas  (American Chronic Pain Association, 2016).

In the medical and experimental literature, more than 100 different types of peripheral neuropathies have been described, classified into different categories:  motor, sensory, autonomic and, finally, mixed neuropathies (Johns Hopkins Medicine, 2016).

The diagnosis of neuropathies is made based on the study of the individual and family medical history, the physical examination and the neurological evaluation. Thus, some of the complementary tests include electromyography, evaluation of nerve conduction velocity, nerve biopsy, lumbar puncture  , magnetic resonance, blood @nalysis, etc. (Foundation for Pheripheral Neuropathy, 2016).

As for the treatment, the essential objective of this is to control and improve the underlying symptoms. Pharmacological therapies are usually based on the  prescription of @nalgesic and anti-inflammatory drugs, antiepileptic medication, topical treatments and antidepressants.

On the other hand, intervention is also  beneficial through therapies such as electrical neurostimulation, plasma exchange and blood globulin, physical rehabilitation  and surgery (Mayo Clinic, 2016).

It is the term used to designate a series of disorders caused by a type of injury to the nervous system. Specifically, they are due to the presence of lesions in the peripheral nervous system (Johns Hopkins Medicine, 2016).

This system is in charge of connecting the nervous branches that are distributed from the brain and spinal cord to the rest of the body (arms, legs,  internal organs, skin, etc.), allowing bidirectional transmission of sensory and motor information (Foundation for Pheripheral Neuropathy, 2016).

Therefore, peripheral neuropathy develops when different events affect the nervous structure of the peripheral system. Depending on the  level of injury, we can distinguish the presence of a polyneuropathy (lesion of multiple nerves) or a mononeuropathy  (injury of an individual nerve branch or an isolated nervous group) (Foundation for Pheripheral Neuropathy, 2016).

Apart from this, the clinical course of peripheral neuropathy will depend fundamentally on the type of nerve that is damaged (National  Institute of Neurological Disorders and Stroke, 2016): 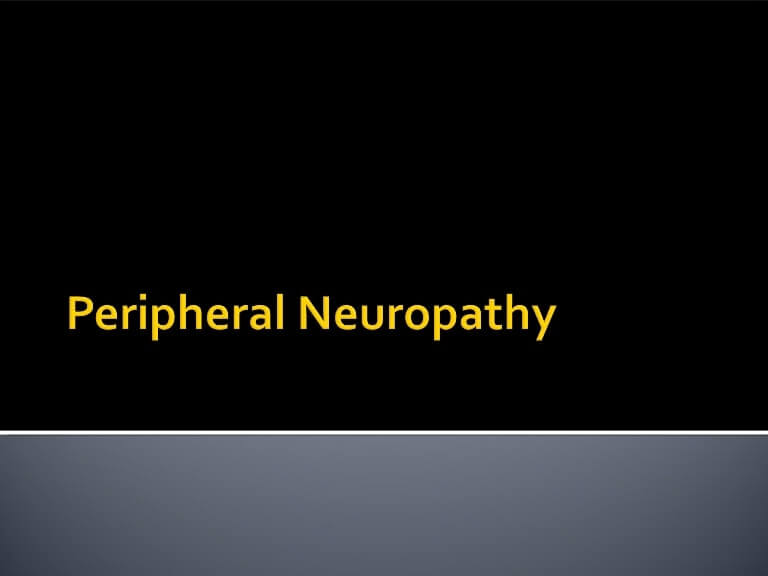 – Motor nerves: they are responsible for the control and transmission of voluntary motor information.

– Sensory nerves: they are responsible for the control and transmission of sensory experiences and perceptions.

– Autonomic nerves: they are responsible for the control and transmission of information related to non-conscious or involuntary activities and processes  .

In this way, some neuropathies can affect predominantly one of these functional areas or several simultaneously, so we can distinguish  several types (Foundation for Pheripheral Neuropathy, 2016):

– Motor neuropathy: Tissue or mechanical injuries affect the nerves located in the peripheral motor branches. In this case, they usually affect the nerves that control the production of speech or body movements, especially in the extremities ,  as a priority.

– Autonomic neuropathy: tissue or mechanical injuries affect the nerve branches responsible for the transmission of non-conscious biological information  . In this case, it usually affects the control of breathing, gastrointestinal functions or heartbeats as a priority  . It is one of the most serious and alarming forms of peripheral neuropathy.

– Mixed or combined neuropathy: in this case, tissue or mechanical injuries can affect the peripheral nerves differently  . Thus, in most neuropathies, all or almost all the functional branches of the peripheral nervous system are affected, giving rise to  wide patterns of sensory, motor and autonomic dysfunction deficits.

Peripheral neuropathy is considered one of the most frequent or prevalent neurological disorders in the general population. Specifically, some  investigations have estimated an approximate prevalence of 2.4% worldwide (Scadding & Koltzenburg, 2007).

In addition, it has been pointed out that the prevalence of peripheral neuropathy reaches 8% in the population aged 55 years and older (Azhary et al., 2010).

Specifically, in the United States, about 20 million cases of disorders and pathologies related to peripheral neuropathy have been recorded  (National Institute of Neurological Disorders and Stroke, 2016).

Most common signs and symptoms

As we have indicated previously, all the nervous branches that make up the peripheral system perform a specific function, therefore, the signs  and symptoms will depend, fundamentally, on the type of nerve or nerves that is affected (Mayo Clinic, 2016).

Thus, although sensory, motor or autonomic symptoms may appear differently, neuropathic pain is a common feature in most  cases of peripheral neuropathy.

Although, most pathologies that affect the peripheral nervous system, altering its normal and efficient functioning, usually do not cause  chronic pain, but negative neurological symptoms, in this case, especially in sensory neuropathies, it is possible to record the presence of  recurrent episodes of pain (Scadding & Koltzenburg, 2007).

In many of the definitions of neuropathic pain, the presence of bothersome or painful episodes associated with a nerve injury is referred to.

As a result, other types of medical complications may appear such as dizziness, muscle weakness, loss of energy, difficulty  concentrating, drowsiness, loss of appetite, feelings of depression, etc. (Scadding & Koltzenburg, 2007).

In addition, specifically, depending on the type of peripheral neuropathy, we can observe a wide variety of associated signs and symptoms (Johns Hopkins Medicine, 2016):

– Muscle Hypotonia: the abnormal reduction of muscle tone and the consequent weakness, constitute one of the most common findings.

– Spasms: sudden and painful contractions of the muscles or a large group of these are frequent, and can also occur  in the form of cramps.

– Muscular atrophy: the presence of other muscular symptoms such as hypotonia, spasms or contractures, can lead to a  reduction or decrease in muscle mass.

– Loss of balance and motor uncoordination: the sensitive symptomatology together with the motor symptomatology, will lead to a significant deficit  of the motor coordination capacity (fine and coarse) of the affected person. In addition, you may also present an unstable or uncontrollable balance.

– Paresthesias: affected people usually describe the presence of numbness, tingling or cramping sensations in the  extremities and other body areas.

– Loss of sensitivity: a significant reduction in the perception of external stimuli (touch, temperature, pain, etc.) can be observed  .

– Acute pain: episodes of recurrent neuropathic pain usually appear, especially during moments of relaxation or during sleep. It constitutes one of the most serious symptoms in relation to the level of quality of life of the affected person.

– Anomalies in sweating: in some of the cases, hypohidrosis appears. That is, a significant reduction in the volume of  sweating in the presence of stimuli that increase body temperature and activity. In turn, it can cause significant medical complications  related to the skin and the control of body temperature.

– Dizziness: some people report sensations of instability, imbalance, confusion, blurred vision or nausea. In many of the  cases, associated with the occurrence of episodes of neuropathic pain.

– Gastrointestinal disorders: when the lesions significantly affect the nerve branches that control gastrointestinal functions  , it is possible to observe the presence of constipation, diarrhea, or urinary incontinence, among others.

Peripheral neuropathy can appear as a consequence of a wide variety of factors that cause damage or injury to peripheral nerve branches  (Pai, ​​2009).

Specifically, there may be a direct degeneration of the nervous structure resulting from a primary pathology, or be a consequence of secondary medical conditions  (Pai, ​​2009).

Many of the etiological causes identified are related to the presence of toxic agents, systemic diseases, drug consumption,  chemotherapeutic agents, traumatisms or mechanical injuries, infectious processes, autoimmune reactions, genetic anomalies and / or nutritional deficiencies  , among many others (Pai, 2009).

However, the most common is related to the condition of diabetes. In the United States, more than 60% of people with diabetes  develop sooner or later some form of nerve damage, with a variable intensity (National Institute of Neurological Disorders and Stroke, 2016).

Many of the symptoms produced by peripheral neuropathy are identifiable at the clinical level, based on the clinical history, physical examination and  neuropsychological evaluation.

However, the clinical course of this pathology may include imprecise or unclear symptoms, due to this, it is essential to use various  complementary tests (Johns Hopkins Medicine, 2016).

– Complete medical history : in this phase, it is important to @nalyze the presentation and evolution of symptoms, exposure to etiological risk factors  , lifestyle and / or family medical history associated with the suffering of nerve pathologies.

– Blood @nalysis: they  are usually used to detect the presence of vitamin deficiencies, alteration of the immune function or pavement of diabetes.

– Imaging tests: nuclear magnetic resonance or computerized axial tomography can be useful for the detection of  tumors or other types of structural pathologies.

– Analysis of nerve conduction: the use of tests that determine the conduction of the information through the nerve fibers in which an alteration is suspected is frequent  .

– Nerve biopsy: it is based on the extraction of a reduced portion of nervous tissue to evaluate the presence of microscopic anomalies  .

The therapeutic interventions designed for peripheral neuropathy present two fundamental objectives: control of the etiological cause and improvement of  the associated medical signs and symptoms (Azhary et al., 2010).

The elimination of the cause of the disease is often possible thanks to the control of the exposure to toxic agents, the consumption of certain drugs, the nutritional supplement, the control of the systemic disease or the surgical approach of the possible mechanical compressions ( Azhary et al.,  2010).

On the other hand, the symptomatological treatment is fundamentally based on the pharmacological prescription of @nalgesics, anti-inflammatories, anticonvulsants,  antidepressants, narcotics, etc. (Azhary et al., 2010).

On the other hand, there are also other types of therapies and procedures, less used, but which also report important benefits in the treatment  of peripheral neuropathy: transcutaneous electrical nerve stimulation, plasma globulin exchange or surgery.