The syndrome Sudeck or complex regional pain syndrome ( CRPS ) is a type of chronic painful clinical course pathology attributed to the development of a dysfunction (Rogers central nervous system or peripheral & Ramamurthy, 2016).

Clinically, Sudeck syndrome is characterized by the presence of a variable dysfunction or deficit of the neurological, skeletal muscle, skin and vascular system (Díaz-Delgado Peñas, 2014).

The most prevalent signs and symptoms in this medical condition usually include: recurrent and localized pain in the extremities or affected areas, anomalies in the temperature and color of the skin, sweating, inflammation, increased skin sensitivity, motor deterioration, and significant delay of functional physical recovery (National Institute of Neurological Disorders and Stroke, 2015).

In addition, two different stages of evolution have been described with respect to their clinical characteristics: stage I or precocious, stage II and stage III (Díaz-Delgado Peñas, 2014).

Although the specific etiological factors of Sudeck syndrome are not known exactly, a wide variety of mechanisms can play an important role both in their genesis and in maintenance.

A good part of the cases develop after the suffering of a trauma or surgical intervention, infectious pathology, or even radiotherapy (National Organization for Rare Disorders, 2007).

Regarding the diagnosis of this pathology, it must be fundamentally clinical and confirmed with other complementary tests (radiology, scintigraphic study , etc.) (Rodrigo et al., 2000).

Although there is no cure for Sudeck’s syndrome, the therapeutic approach requires a multidisciplinary approach that usually includes pharmacological therapy , physical rehabilitation, surgical procedures and psychological treatment, among others (Ribera Canudas, X).

Pain is one of the medical symptoms that all people experience or have experienced at some time.

In this way, we usually seek remission or relief from it through the available techniques (@nalgesic, emergency medical care, etc.) and, in addition, the diagnosis is usually more or less evident (Clevelad Clinic, 2016).

However, there are certain cases in which none of these approaches is effective and it is not possible to find a specific medical cause (Clevelad Clinic, 2016).

One of these cases is Sudeck’s syndrome, also known as reflex sympathetic dystrophy (DSR) or other less used terms such as algodystrophy, algoneurodystrophy, Sudeck’s atrophy, transient osteoporosis or shoulder-hand syndrome, among others (National Organization for Rare Disorders, 2007).

The syndromes related to chronic pain resulting from trauma have been reported in the medical literature for several centuries. However , it was not until 1900 that Sudeck first described this syndrome, calling it “acute inflammatory bone atrophy” (Rodrigo et al., 2000).

However, the term reflex sympathetic dystrophy (DSR) was proposed and coined by Evans in 1946. Thus, the International Association for Study of Pain, defined in 1994, the clinical criteria and the term of this pathology as Complex Regional Pain Syndrome ( Ribera Canudas, 2016).

Sudeck syndrome is a rare form of chronic pain that usually affects the extremities (arms or legs) as a priority (Mayo Clinic, 2014).

Generally, the signs and symptoms characteristic of this pathology are presented after a traumatic injury, surgery, cerebrovascular or cardiac accident and it is associated with a deficient functioning of the sympathetic nervous system (Mayo Clinic, 2014). 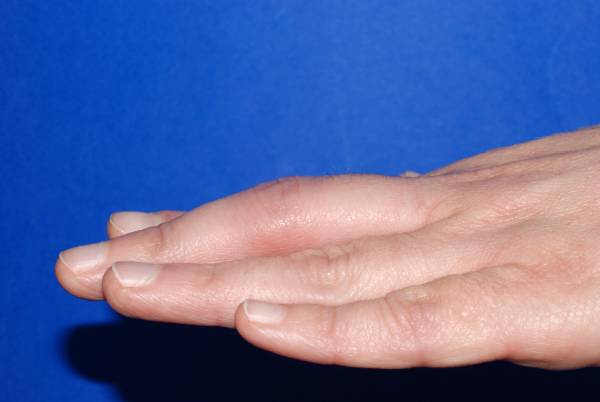 In addition, we must emphasize that the peripheral nervous system, in turn, has two fundamental subdivisions (Redolar, 2014):

Thus, the sympathetic nervous branch is part of the autonomic nervous system and is responsible for the regulation of involuntary movements and the homeostatic processes of the organism. Specifically, the sympathetic nervous system is responsible for the production of defense responses to events or circumstances that represent a danger, potential or real (Navarro, 2002).

The sudden and massive activation of the sympathetic system produces a wide variety of relationships among which we can highlight: pupillary dilation, sweating, increased heart rate, bronchial dilation, etc. (Navarro, 2002).

Therefore, when a damage or injury affects the sympathetic system, abnormal responses may occur systematically, as in the case of Sudeck syndrome.

Anyone can suffer from Sudeck syndrome, regardless of age, sex, place of origin or ethnic group.

No relevant differences have been identified in terms of age of onset, however, it has been possible to register a higher prevalence of this condition in women with an average age of 40 years (National Institute of Neurological Disorders and Stroke, 2015).

In the case of the pediatric population, it does not appear before 5 years of age and, moreover, it is scarcely frequent before 10 years of age (National Institute of Neurological Disorders and Stroke, 2015).

Although there are few statistical data related to this pathology, many point to an incidence of 5.6-26, 2 cases per 100,000 inhabitants of the general population. In addition, the prevalence ratio is 4: 1 in favor of the female sex (Villegas Pineda et al., 2014).

On the other hand, the most frequent triggering causes are traumatic, usually suffering from bone fractures (Villegas Pineda et al., 2014).

The characteristic clinical picture of Sudeck syndrome includes a wide variety of signs and symptoms that usually vary depending on the temporal evolution of the pathology (Díaz-Delgado Peñas, 2014):

Stage I or precocious

In the initial phase of Sudeck’s syndrome, the symptoms can fluctuate recurrently and remain indefinitely. In addition, the onset is usually slow, may begin with a feeling of weakness or burning in some areas, followed by a progressive stiffness.

Some of the most common alterations in this stage are:

As we have pointed out previously, the specific causes of Sudeck syndrome are not known exactly, despite being related to the sympathetic nervous system (Mayo Clinic, 2014).

Apart from this, it is possible to classify this pathology into two fundamental types, with similar signs and symptoms, but with differential etiological causes (Mayo Clinic, 2014):

On the other hand, we must emphasize that in some affected people it is not possible to identify the precipitating factor and, in addition, family cases of the disease have also been documented , so a potential field of research would be the @nalysis of the genetic patterns of this disease.

Recent research suggests that Sudeck syndrome may be influenced by the presence of various genetic factors . Several family cases have been identified in which this pathology presents an early birth, with a high presence of muscular dystonia and, in addition, several of its members are severely affected (National Institute of Neurological Disorders and Stroke, 2015).

The initial diagnosis of Sudeck syndrome is based on clinical observation (Kirkpatrick et al., 2003).

The medical specialist must recognize some of the characteristics and most common manifestations in this pathology, therefore, the diagnosis is usually made based on the following protocol (Kirkpatrick et al., 2003):

In addition, once a consistent suspicion has been formed about the condition of this pathology, it is necessary to use different laboratory tests to rule out the presence of other differential pathological processes.

Some of the tests employed include more x – rays, the volume densitometry, computerized axial tomography, the nuclear magnetic resonance or the scan (Basin Gonzales et al., 2012).

In addition, the use of other tests such as intra-osseous phlebography, thermography, cutaneous fluximetry or Q-SART has also been reported in the medical literature (Cuenca Gonzáles et al., 2012).

Currently, there is no identified cure for Sudeck syndrome, mainly due to ignorance of the etiological and pathophysiological mechanisms .

However, there is a wide variety of therapeutic approaches that can be effective in controlling and alleviating the signs and symptoms suffered by affected people.

Thus, the National Institute of Neurological Disorder and Stroke (2015), points out some of the most used therapies:

The medical prognosis and the evolution of the pathology vary significantly among the people affected. In some cases, it is possible to observe a complete and spontaneous remission of the symptoms.

However, in other cases, both pain and other pathologies usually present irreversibly, persistently and are resistant to pharmacological therapies.

Apart from this, the specialists in the treatment of pain and the Sudeck syndrome, point out that it is essential to approach the pathology early, as it helps to limit its progression.

Sudeck syndrome remains a little known disease, there are few clinical studies that clarify the causes, the clinical course and the role of experimental therapies.