The treatment of alcoholism has scientific evidence that supports it, because alcohol is one of the drugs that demand greater care, hence the need to have updated treatments available.

Alcoholics are those people who abuse or are dependent on alcohol, the central nervous system depressant drug. Along with tobacco, are the legal substances most consumed by both the general population and students? Men are those who abuse it the most and the beginning is given to low middle ages.

Therapeutic lines of action for alcoholism

In the treatment of alcoholism there are two possible lines of action, on the one hand:

Within this approach we find aversive therapy, contingency management, exposure therapies to tracks, the therapy  cognitive , the social skills training , relapse prevention, the program multicomponent broad spectrum and behavioral therapy and of  couple .

Within these we find the controlled drinking program and the motivational interview.

General aspects of the psychological treatment of alcoholism

The objective of psychological treatment of alcoholism is focused on changing the behaviors in direct relation with the consumption of alcohol, since it is the subject solely responsible for its problem.

The treatment seeks to reduce the person’s interest in alcohol, while seeking to increase their preference for other activities linked to long-term adapted functioning. Treatments of this type are not carried out in a hospital setting, but in the person’s own environment. It is necessary to take into account that, if the person presents / displays abstinence syndrome to finish stopping to drink, it would be convenient the detoxification of this one, with tranquilizers, in the hospital or outpatient. In these cases, the support of the couple is fundamental, as it helps to take an important step towards the cessation.

The goal of this therapy is to reduce or eliminate the person’s desire for alcohol through a series of stimuli or images that are intended to be associated with certain signs of drinking (egg, color, taste, smell …). Aversive therapies can be given in several ways:

It matches a particular stimulus of the drink as the flavor, with an aversive stimulus like the nauseas and vomits created by a drug that causes the vomit (emetics). Once you are given the emetic drug and begin to feel nausea and vomiting, you are asked to drink. You have to taste, smell, spin the drink in your mouth and then swallow it.

Currently the use of emetics is more used as relapse prevention.

The same stimuli are paired, but with a respiratory arrest by a drug called Anatine. Currently out of stock.

Stimuli of a variety of alcoholic beverages are matched with an electric shock.

Different options are posed; on the one hand, different types of highly aversive images are used for the subject, contingent on a maladaptive approach to alcohol.

Another option is an aversion-relieving procedure, in which unpleasant images end up with the imagination of an appropriate response such as rejecting the drink. The most commonly used current option is a combination of both contingent aversion and escape procedures linked to appropriate behaviors.

A good predictor is the appearance of conditional nausea. It is not recommended for use in certain cases (egg severe depression, psychosis, heart disease, gastrointestinal disorders, etc.).

From this approach, alcohol consumption is considered to be operative behavior maintained by the social and substance enhancing effects.

As reinforcement, exchangeable vouchers are usually used, in order to reinforce abstinence behaviors or to attend therapy, to achieve goals and other adaptive behaviors. 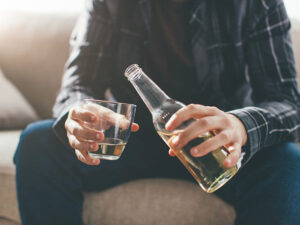 Based on the principles of classical conditioning, it starts from the idea that certain stimuli initially neutral to behavior, after repeated pairings, eventually become triggers of the conditioned response of consuming. These stimuli can be environmental or individual cues (anxiety, mood??).

This therapy works best when combined with coping strategies.

It includes training in problem solving and craving management (desire to consume); the former is an important element of many cognitive-behavioral treatments and is a strategy included in almost all relapse prevention programs.

Behavioral treatments also include craving control, coupled with control of emotions and stress.

It focuses on the training of certain skills to respond appropriately to the environmental and consequential background and individual that maintains the drinking behavior.

From here it is considered that the patient does not have adequate interpersonal and social skills to cope with social pressure, or handle the stress of these situations and not trigger drinking behavior.

Also Read: How to Help a gambler: 10 Effective Tips

The objective is to provide the individual with coping and self-control skills to handle risky situations that trigger drinking.

It can be conducted in group therapy format, and include techniques such as modeling, therapist training, group feedback, behavioral testing and repeated practice.

Multi-component educational procedure. It can be applied in group format, as individual, or in self-help manual. The therapist introduces the components and sends tasks home.

The procedure consists in self-observation of behavior; the planning of objectives to be achieved; control of antecedent stimuli of drinking behavior; training in what and how to drink to reduce the negative consequences of alcohol; reduction of drinking in favor of other more adaptive behaviors; the reinforcement of the objectives achieved and the learning of skills, such as knowing how to refuse the offer of alcohol from an acquaintance??

These programs use techniques to identify high risk situations, teaching coping skills, coping strategies, coping with falls, and problem solving. It is important to pay attention to stressful situations, as these often precede those at high risk of drinking.

It is a broad spectrum behavioral treatment for substance abuse and with ample evidence, aimed at changing the lifestyle related to substance use.

It aims to reduce alcohol consumption and increase the person’s functional behavior. It can be applied in a group or individually and both to outpatients and hospitalized patients.

At the start of therapy, the sobriety test is usually called for. This consists in negotiating a withdrawal period of at least 90 days (never less than 60 days) while joining the introduction of disulfiram , a drug for maintain abstinence since if you ingest alcohol under the effects of this one produces a fast and intense hangover. Disulfiram is given under the supervision of the partner (if possible).

Motivational techniques and positive reinforcement are highly important. Through the reinforcement of alternative activities to alcohol, it is intended to include elements that increase the maintenance of abstinence.

They are multicomponent programs and they are part of the idea that one or more members of the family maintain alcohol abuse through reinforcement. Besides, marital problems are not rare.

The treatment will consist of reinforcing abstinence while the person with alcoholism is involved in activities that are satisfactory and not related to drinking.

The techniques normally included are:

7-Psychological treatments whose goal is not complete abstinence

It was created by Davis, who, in 1962, noted that it was possible to get control of drinking. This program starts from the difficulty of totally controlling the consumption of alcohol in some drinkers, as well as the existence of some people who refuse to seek complete abstinence.

Suitable patients for this program are those who reject abstinence as an objective, who have strong external demands for social drinking, are young and with good family and social support and who fail in previous abstinence-oriented treatments.

They are behavioral programs, based on self-control models, that teach a set of strategies and that usually consist of the following components:

Delimitation of the objectives.

Before discussing what this interview consists of, it is important to be clear about the stages proposed by Prochaska and Decremented, in their transtheoric model, on motivation. They spoke of the existence of 7 stadiums.

The motivational interview was created by Miller and Rollick (1991) and it is a type of intervention focused on increasing the patient’s motivation when he is in the stages of precontemplation and contemplation.

The procedure of this interview consists in paying attention to the following aspects:

Track exposure therapy and medication such as disulfiram, as probably effective and contingency management as treatment in experimental phase.