The vascular dementia (VD) may be defined as memory impairment that occurs with dysfunction in one or more of the following cognitive domains: language, praxis, executive function, orientation, etc. It is severe enough to affect the patient’s daily activities.

This type of disorder appears as a result of brain damage due to multiple vascular accidents or focal lesions in the blood vessels supplying the blood to the brain (National Institute of Neurological Disorders and Stroke, 2015).

Vascular dementia is the second leading cause of dementia in Western countries, following Alzheimer’s disease. In addition, it is a potentially preventable type of dementia (Álvarez-Daúco et al., 2005).

Typically, vascular dementia and vascular cognitive impairment arising as a result of various risk factors for both this pathology as  for the condition of stroke , these include atria fibrillation , hypertension , diabetes , high cholesterol and / or antipathy  amyloidal , among others ( National Institute of Neurological Disorders and Stroke, 2015).

After Alzheimer’s disease (AD), vascular dementia is the second leading cause of dementia.

In the United States an estimated 4 million people have dementia symptoms and it has been predicted that this figure could reach  16 million people due to population aging, in which between 20-25% of the cases (approximately 3, 5 million  people) will present dementia of vascular origin (Bernal and Roman, 2011).

This fact is mainly due to the increase in the prevalence in these age ranges of two or more chronic diseases such as hypertension, diabetes, heart disease or osteoarthritis (Formica et al., 2008).

The exponential growth of life expectancy in the last decades has led to an increase in diseases related to aging. Currently, dementia is a major health problem in developed countries, as its incidence continues to increase (Bernal and Roman, 2011).

Under the term vascular dementia (VD), a poorly h0m0genous group of disorders in which vascular factors play an important role in the development of cognitive impairment (CD ) has been classically included  (Álvarez-Daúco et al., 2005).

In the scientific literature regarding the area of ​​vascular dementia, we can find many terms associated with this clinical entity and in  many cases some of them are misused as synonyms: among them we can find: multi-infarct dementia, arteriosclerotic dementia  , dementia due to leukoaraiosis, Binswaswagner’s disease, vascular cognitive impairment, etc. (Bernal and Roman, 2011).

The vascular dementia is defined as that which results from cerebral vascular lesions, hemorrhagic, ischemic or type hypo / hyper perfusion (Bernal and Roman, 2011).

The different etiological conditions will cause different brain vascular lesions that will vary in number, extension and location affecting both cortical and sub cortical regions, especially cholinergic ones (Bernal and Roman, 2011).

Vascular lesions may damage cortical or sub cortical structures or may be restricted to white matter and basal ganglia, causing damage to specific circuits or disrupting connections between networks that may be essential to support different cognitive and / or behavioral functions (Bernal and Roman, 2011). 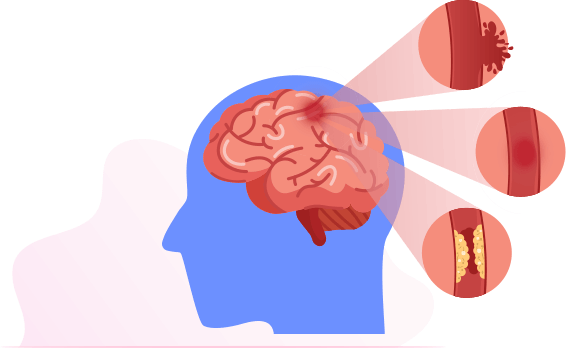 The symptoms and signs of this pathology along with the clinical course can be very variable from one patient to another, depending on the cause of the lesions and especially on the location of these lesions (Jodi Vicente, 2013).

In most cases, the onset of vascular dementia usually presents an abrupt and abrupt onset that follows a phased evolution. Many families observe periods of stabilization, followed by “outbreaks” or more pronounced cognitive losses (Jodi Vicente, 2013).

Usually, the most common complaint from relatives and even the same patient, is “feeling that they are not the same.” It may refer to apathy, depression, Apulia, isolation and social inhibition or changes in personality (Bernal and Roman, 2011).

In addition, it is possible to observe focal type neurological alterations that will affect sensitivity and motor skills. There may be a gait deficit, inability to perform basic activities of daily living (bathing, using the telephone, dressing, going to the bathroom, eating, etc.), clumsiness in language production, etc. In addition, it is also possible to observe incontinence or urinary urgency.

Patients will also present alterations in the cognitive sphere. They may present a decrease in the attention level, a slowing of processing speed, a deficit in the ability to plan and execute actions and activities, confusion, disorientation, and a significant alteration of immediate memory.

It occurs as a consequence of multiple focal lesions in the cortical blood vessels. It is usually produced by the presence of emboli, thrombi, cerebral hypo perfusion, or strokes. In most cases, multiple infarcts may be restricted to a cerebral hemisphere, so deficits will be associated with the predominant cognitive functions in the hemisphere (National Institute of Neurological Disorders and Stroke, 2015).

It occurs as a consequence of lesions in the blood vessels and nerve fibers that constitute the white matter. The symptoms that are presented are related to an alteration of the sub cortical circuits involved in short-term memory, organization, mood, attention, decision making, or behavior (National Institute of Neurological Disorders and Stroke, 2015).

Different clinical studies, generally post-mortem, have shown cases in which there is a parallel occurrence of both vascular etiologies and Alzheimer’s disease (National Institute of Neurological Disorders and Stroke, 2015).

Thus, the Neuroepidemiology Branch of the National Institute of Neurological Disorders and Stroke and the International Association for Research and Research in Neurosciences propose that the diagnosis of vascular dementia must be supported under different criteria (Bernal and Roman, 2011):

The main cause of vascular dementia is stroke. With the term cerebrovascular accident (CVD) we mean any alteration that occurs transiently or permanently in one or several areas of our brain as a consequence of a disorder in the cerebral blood supply (Martinez-Vila et al., 2011).

On the other hand, it is also possible that patients undergoing high-level surgeries (cardiac, carotid, hip replacements  ), with conditions of cerebral hypo perfusion, chronic hypoxemia, exposure to chronic infections or infections, autoimmune diseases and vacuities , are  patients with a high risk of presenting DV with cumulative vascular damage (Bernal and Roman, 2011).

There is currently no specific treatment that reverses the damage caused by a stroke. Treatment usually seeks to focus on preventing future stroke by controlling medical risk conditions.

On the other hand, in the therapeutic intervention of the cognitive deterioration will be useful programs of stimulation specific of dementia, like programs destined development and maintenance of concrete cognitive functions.

The best approach to this type of pathology is to start with the control of risk factors and therefore their prevention. It is essential to wear a style healthy lifestyle, a balanced diet, exercise, avoid alcohol and / or snuff and also maintain a healthy weight.