What are the Signs and Symptoms of Alcoholism the symptoms and signs of alcoholism are: compulsive drinking, being unable to control the amount of alcohol you drink, needing to drink more alcohol to have the same effect, and drinking alone or in hiding, withdrawal syndrome and spending too much time drinking.

Alcoholism is a mental disorder characterized by abuse and dependence on alcohol. Thus, a person who suffers from alcoholism presents a pattern of consumption of this substance in an undated manner, resulting in negative consequences for both his physical health and mental health.

What are the Signs and Symptoms of Alcoholism

However, often determining if a person suffers alcoholism is complicated, because delimiting when a person ingests normal amounts of alcohol and when he makes a pattern of pathological consumption can generate many doubts. 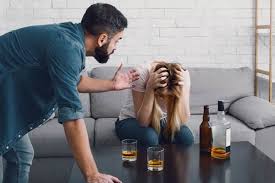 To overcome this ambiguity and acquire knowledge about this mental alteration, a series of signs and symptoms have been described that define alcoholism as such and, therefore, allow differentiating the different patterns of consumption.

Alcoholism is a psychological alteration. It is the first concept that must be clear to be able to delimit when a person is dependent on alcohol.

This disorder is caused by the consumption of alcohol that is, created by the substance when it is ingested in a habitual and abusive way. However, alcohol by itself does not create any mental pathology.

In other words, alcoholism is not caused by alcohol itself but by the consumption of these substances by an individual.

Alcoholism is a psychopathology that is suffered by the consumer, so it can be equated with other mental disorders such as depression or anxiety because, although the main element is shaped by alcohol, the pathology is present in the brain regions of the consumer.

Continued and prolonged consumption of alcohol affects the whole organism; heart, liver, pancreas, immune system and brain. There is a risk of developing Wernicke-Korsakoff syndrome, risk of cancer as well as other diseases.

So, in order to delimit alcoholism, we will not only have to pay attention to the amount of alcohol consumed, but we must take into consideration the symptoms presented by the consumer.

In fact, the main elements that define alcoholism are the appearance of a series of symptoms that demonstrate the presence of addiction and dependence.

Symptoms and signs of alarm

Most people have serious problems with alcohol without having all the signs and symptoms of alcoholism.

In these cases, individuals already make an inappropriate and dangerous consumption of the substance but, since alcohol addiction is usually slow, they have not yet come to generate substance dependence.

Being able to detect these cases is extremely important because, although in these cases the person already has a certain addiction; if you intervene at this time the treatment can be easier and can prevent the development of alcoholism.

However, if you do not intervene in these cases, it is likely that the person will continue their problems with alcohol until they end up developing the disease of alcoholism.

Previously, alcoholism was divided into two distinct groups. On the one hand, alcohol abuse that does not reach dependence on the substance but does cause serious problems in the lives of people who consume it, and by another dependence on alcohol, which would be alcoholism itself.

This dependence causes an extreme need to consume alcohol, losing control, physically (abstinence) depending on it and the person needing increasing amounts of alcohol for the substance to have the same effects in your body.

Some signs of alcohol abuse would be to have social impairments such as problems at home, with family, with friends, at work, consuming in places where it is physically dangerous, loss of control, continuing to drink despite being aware of having legal problems , family, at work as well as being affected social and occupational activities.

The signs that best indicate that someone may have problems with drinking and being at risk of developing alcoholism are:

People who drink this substance in a more compulsive way, such as drinking fast or rushing to get the drink, may already have psychological alterations typical of addiction.

Not being able to limit the amount of alcohol consumed

In relation to the previous point, people who are at risk of generating alcoholism have difficulties to be aware of the amount of alcohol that has been consumed and to decide that it will not be consumed anymore.

So, unlike someone who does not have problems with drinking, these types of people get intoxicated easily even when they have no intention of doing so.

Alcohol tolerance is the main symptom that indicates that the body is getting used to the substance.

In this way, people who consume excessively require greater amounts of alcohol to feel the desired effect, so they are increasing their consumption.

Need to drink to feel good

The typical phrase “I need a drink” may be more or less irrelevant when performed sporadically or at special times of stress, fatigue or mental saturation.

However, when the need to drink to feel good appears frequently, it becomes clear that the body begins to require the substance to function normally, that is, is beginning to generate alcohol addiction.

Drink alone or hide the drink

Drinking alcohol on the sly may manifest that the consumption of the substance causes some discomfort to the person.

In the moments prior to alcoholism, the person may be aware that their pattern of consumption is excessive, have embarrassed to drink so much, want others not to know and hide the amounts of alcohol they ingest.

Other physical symptoms that show alcohol dependence would be stomach pain, noticeable weight loss, redness of cheeks and nose.

How can you detect alcoholism?

Far from it, the conceptualization of alcoholism remains as an individual who “drinks a lot” or “is always in the bar”. Alcoholism itself is a much more complex disease than simply observing a pattern of abusive alcohol consumption.

In order to determine the presence of alcoholism and anticipate which people may be at risk of developing this disease, we must pay attention to a series of signs and symptoms that can define this type of situations.

In addition, to intervene adequately in this pathology, it is very relevant to be able to establish a good diagnosis of both alcoholism and the pattern of consumption that can lead to alcoholism.

The detection of certain symptoms may manifest a pattern of consumption and a highly dangerous psychological condition for alcoholism, while others may reflect the emergence of a clear dependence on the substance.

Symptoms and signs of alcoholism

Unlike the previous point, we will now comment on the symptoms that define the presence of alcoholism, that is, when the person already has a clear dependence on the substance. The main ones are:

Abandonment of other activities

The alcoholic reduces or eliminates social cohabitation related to work or recreational activities.

The stimuli that provide pleasure are limited in the consumption of alcohol so that little by little is eliminating all activities that do not involve the intake of these substances.

The alcoholic usually consumes large amounts of alcohol over a long period of time.

While people who have problems with drinking frequently drink alcohol and are sometimes intoxicated, alcoholics drink daily, continuously and most of the time is drunk.

Alcoholics can make multiple attempts to reduce or control the amount of alcohol consumed but these are always unsuccessful.

Thus, in alcoholism, the individual consumes more alcohol than he or she would like and, despite trying to control it, is totally unable to interrupt or reduce their intake.

It continues to consume despite being aware of the problems that it produces and although it tries to reduce and control that consumption, it does not achieve it.

The alcohol consumer will continue to drink despite being aware that it causes physical and pathological problems.

The most common is that the person has already begun to present various physical and / or psychological alterations caused by alcohol, but continues to consume despite knowing that alcohol will aggravate their pathologies.

Alcoholism causes the individual to allocate an abnormal amount of time in activities related to the ingestion or obtaining of alcohol.

The person will spend most of the day consuming or acquiring alcoholic beverages, since their only interest is in the intake of these substances.

This will appear whenever the individual does not drink for a certain period of time and will present through annoying symptoms such as nausea, sweating, agitation or anxiety.

Alcoholism is a mental disorder that is characterized by experiencing a strong need to ingest alcohol. It is a chronic disorder caused by excessive and compulsive alcohol consumption leading to a physical or psychological dependence or addiction.

The alcoholic person presents a clear physical dependence on this substance, being manifested through the necessity to consume and the experimentation of a series of withdrawal symptoms when not ingested.

Also, alcoholism causes the individual to have no control over the limits of their consumption, which increases as tolerance develops. That is, as the person needs higher amounts of alcohol to perceive the same effects.

The Medical Association of the United States considers alcoholism as a chronic, incurable, progressive and deadly disease.

In this way, as soon as a person develops alcoholism, it is considered to be for life.

Although the individual is able to interrupt their consumption or even spend long years without ingesting alcohol, it is considered that the person will remain alcoholic; reason why at any moment can fall to the consumption.

Alcohol is a drug considered soft and admitted as legal, reason why its consumption is nowadays highly basified in many regions of the world.

This is due to the main characteristics of the substance, which are not particularly dangerous as long as they are consumed in a prudent manner.

As is well known, alcohol abuse can lead to a large number of physical conditions and alterations in different body organs.

Also, an inappropriate consumption of alcohol can also cause mental disturbances and, of course, the development of alcoholism.

Nowadays, the idea that a little or sporadic consumption of alcohol does not have to carry physical or mental alterations is widely accepted and accepted.

However, alcoholic intoxication, that is, consuming a lot of alcohol at once, can be highly dangerous, presenting the typical symptoms of intoxication or even being fatal if consumed excessively.

However, unlike other drugs, it takes a lot of abusive time for a person to present a clear dependence on the substance.

When does alcoholism appear?

Unlike other drugs like tobacco, cocaine or amphetamines, which can lead to addiction very quickly, the addictive process of alcohol seems to slow down.

So, consuming alcohol (even abusively) for a few months does not make you an alcoholic or generate a physical dependence on this substance.

This does not mean that abusive consumption over a period of time does not predispose you to alcoholism. In fact, starting to consume alcohol frequently is the first step to generate dependence on this substance.

In the initial moments of consumption, discontinuing alcohol intake may be more or less straightforward for the individual. However, as the time of ingestion passes, abandoning alcohol can become a more complicated task and, therefore, dependence on the substance is increasing.

The addictive pattern of alcohol can generate many doubts because, although it takes many years of consumption to generate dependence on this substance, it seems that in the previous moments there may already be a “pseudo-addiction” to alcohol.

In fact, if there were not a certain substance addiction before reaching alcoholism, it would not be understood why people prolong consumption for years until they become clearly dependent on alcohol.

For all this, in order to determine the effect that alcohol is causing on mental functioning, it is important to know the symptoms and signs that define the presence of alcoholism and that can alarm the possible development of this disease.