The empathy is a complex skill that allows us to identify and share the emotions they feel other people only watch. This ability is fundamental for social animals because for a society to function properly it is necessary to understand the thoughts, actions and intentions of others and be able to transmit our own.

Throughout the history have been given multiple definitions to the word empathy, therefore it is convenient to differentiate it from other phenomena with which it is usually confused.

– Sympathy would be defined as the ability to feel positive emotions towards other people or negative when we see that they suffer. A difference of empathy, sympathy does not mean feeling the same as the individual we observe. For example when a person for whom we feel sympathy is angry we usually feel sorry and not fury.

– Emotional contagion occurs when we feel the same emotion as the person we are observing but we do not identify it as an alien, if not as our own. An example of emotional contagion would be the fact that a baby starts to cry when he sees another crying, in that case we would not be talking about empathy since the baby is unable to know why he is crying. Fortunately, emotional contagion often comes in the face of positive emotions; often we are happy because the people around us are happy.

– The theory of the mind is the ability to infer what another person is thinking or the intentions that have only to see it and, unlike empathy, without sharing their emotions. A good example of the difference between these two phenomena is the behavior of people suffering from a psychopathic personality disorder. These people often have a correct theory of the mind, so they are able to understand what other people think, but they do not have a correct empathic capacity, so they are immune to the emotions of others. That is, they are able to know what the other person is feeling but do not share that emotion.

Why do we feel empathy?

To be able to feel empathy, the correct functioning of two brain regions, the anterior insular and the anterior cingulated cortex are indispensable. These regions are related to the motivation and perception of our own feelings.

The insular is related to the visceral perception, for example the feeling of a knot in the stomach when we see another person crying, whereas the cingulated cortex would be more related to motivation since it plays a fundamental role in the identification of errors and conduct necessary to avoid it.

Throughout history there have been numerous studies that relate these areas to empathy. One could say that the “mother” of these studies is Tania Singer who demonstrated in a study with monkeys that when experiencing pain activated the same structures as when seeing another individual experiencing it.

Later, the same author verified that this effect was also observed in humans. For example in a study with couples recorded the brain activity of the female partner when she was receiving a painful stimulation and when she saw that her partner suffered the same stimulation.

As a result it was verified that in both cases the same areas were activated, the anterior insular and the anterior cingulated cortex. In later studies it has been found that these areas are activated when we see an unknown person suffering and even when we observe videos or photos in which individuals appear with expression of pain. 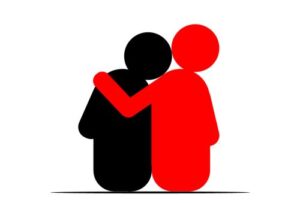 A very interesting phenomenon also related to empathy is the sensorial simulation; this phenomenon is responsible for us to perceive sensory sensations when we see another person who is receiving a sensory stimulus.

One study found that the secondary somatosensory cortex was activated in individuals when they caressed the leg as well as watching videos of other people who were also caressed.

What are mirror neurons?

To feel empathy is essential mirror neurons, these neurons are activated equally when we perform an action and when we see that another person is performing. So when we see a person performing an action, our brain behaves like a mirror, mentally imitating the individual we are observing, hence its name.

The discovery of mirror neurons was one of the most important of the twentieth century for the field of neuroscience. These types of neurons were discovered accidentally in 1980 by two Italian researchers, Rizzolati and Pellegrino.

These researchers intended to monitor the neuronal mechanisms that were activated when performing a motor action, for this they recorded the neuronal activity with electrodes of a monkey while it took peanuts and ate it.

At one point during the experiment one of the researchers took a peanut and ate it; imagine his surprise to discover that the monkey had been activated the same brain areas as in doing it himself, specifically the F5 area of ​​the cortex ventral preemptor. So one could say that the mirror neurons were discovered thanks to the appetite of one of the Researchers.

In subsequent research it has been found that it is not necessary to see another individual performing an action for these neurons to activate, it is enough to listen to or infer that this action is being performed.

Given the above description, it might seem that mirror neurons only handle motor simulation, but thanks to them we can know what a person is  doing and why he is doing it, i.e. what is his goal.

For example, in a study carried out by Iacoboni, it was observed that if images of people were shown performing the same action, taking a glass, but with different context, dishes dirty or clean, the study participants attributed different intentions to the actions. In the case of the dirty dishes they inferred that the intention was to collect the glass and in the context of the clean plates it was inferred that the intention was to drink.

Where are mirror neurons located?

In humans, mirror neurons have been found in the motor area F5, area 44 of Bradman (part of the preemptor cortex), and in the posterior parietal cortex. These regions are not directly connected, they do it through the superior temporal furrow, and structures with which they communicate in a bidirectional way that is to say send and receive information.

The area 44 of Bradman, which is part of the area of ​​Boca involved in the motor production of speech, would serve to know the objective of the action, while the lower parietal cortex would be in charge of codifying the movements necessary to perform such action. In this circuit the upper temporal groove would act as a nexus between the two structures and would not have “mirror” properties.

When do mirror neurons develop?

Apparently our mirror neurons are active from birth since the imitation behaviors are innate and can be observed from very early ages.

Mirror neurons develop as the individual grows, so that imitation behaviors gradually improve through experience. That is, to a greater experience with a concrete behavior, greater activation of the mirror neurons and greater perfection of the simulation.

The evolutionary value of mirror neurons is evident because they facilitate learning through observation as well as the transmission of information, according to Ramachandran “[…] it is as if these neurons were adopting the perspective of the other, it is as if they were doing a simulation of virtual reality of the action of another person “.

For example, in a study conducted by Bucking in 2004, it was observed that by practically imitating the guitar, the mirror neurons of the musicians who had played the guitar before were activated more than those who had never played the guitar.