The synesthesia is a peculiar process of perceptual systems in which humans are treated together various types of feelings concerning different meanings in the same perceptive act. In this way, the person manages to perceive as a whole two different perceptions such as sound and color.

It seems strange that this can happen but it is a scientifically proven phenomenon and experienced by several people in the world.

If you want to know more and understand exactly what synesthesia is about, do not miss this review that we will make about this peculiar phenomenon.

When we speak of synesthesia, we refer to a process of human perception in which in that perception, two or more receptive senses are activated.

The “normal” people, when we hear a sound, be it a musical note or any noise, in our brain the receptive senses are activated regarding the ear.

However, what happens with synesthesia is that when listening to a sound, not only are the senses related to the ear activated, but other sensory modalities can be activated, such as the visual one.

Thus, a synesthetic person has the peculiarity that he is capable of activating more than one perceptive sense before a specific stimulus.

As we can see, providing a clear definition of the phenomenon of synesthesia is not an easy task, due to the great confusion it can generate.

In fact, since the beginning of their study, the definitions of synesthesia have been much discussed with each other, until reaching the point that no universal definition has yet been agreed upon.

This fact is explained in part by the great variations that can be observed within this phenomenon.

However, there are also others that are somewhat more questioned but equally studied, such as the combination of pain and color.

Thus, we see that all phenomena of synesthesia refer to the involvement of two perceptual modalities in the face of the same sensory stimulus.

The main problem then lies in agreeing which associations should be included and which should be excluded within what is understood as a synesthesia phenomenon.

In fact, by involving different perceptual modalities in the same sensory sense, the experimentation of emotions and personifications also enters with great force.

This controversy is especially important when we @nalyze synesthesia within the artistic world, granting a high creative capacity to this peculiar phenomenon.

However, for many scientific researchers who intend to study the underlying mechanisms of synesthesia, it is vital to focus on perceptual modalities.

From this point of view, which can serve for more complex conceptualizations about the concept of synesthesia, this phenomenon can be defined as the ability of the perception system to induce perception within a sensory modality by stimulating a different sensory area.

Evidently, there are few people who possess this phenomenon and who are capable, as explained in the previous definition, of perceiving stimuli through a sensory modality different from the one that belongs.

In this way, a person with synesthesia would have the ability to see sounds or hear images.

Likewise, associations within the same modality are also frequent, such as associating colors with letters, numbers or words.

As we can see, the sensory possibilities that can appear in a synesthetic person are multiple; can hear colors, see sounds, taste textures or associate different stimuli in the same perceptual sense.

In addition, sensory associations are endless, since rarely do two synesthetes share the same characteristics in terms of their perceptual capacity.

This fact makes synaesthesia become an attractive and interesting phenomenon for scientific research, as difficult to study and delimit with explanatory parameters.

In fact, many scientists dare to affirm that synesthetic people what they possess in themselves is an extra sense that allows them to multiply by a thousand the perceptive abilities of a normal person.

Thus, through this sense it becomes clear how reality is not the same for everyone, since each person can have a different experience of the world, and in the case of synesthetic people can perceive all the elements in a completely different from others.

How many people have synesthesia?

When we try to understand the phenomenon of synesthesia, we find it difficult to assimilate that there are people who have sensory abilities so different from those of “normal” people.

Likewise, it is difficult to imagine clearly how it can be that a person can perceive stimuli through different sensory modalities or even through more than one perceptual sense simultaneously.

The truth is that synesthesia has always been considered a very rare phenomenon, that is, there are very few people in the world who possess this type of abilities.

However, the great scientific interest that is uncovering this phenomenon, as well as the recent link between synesthesia and art or creative capacity, has shown that the prevalence may be much higher than previously thought.

In this way, despite not having today exhaustive results and data, there are scientists who suggest that the prevalence of synesthesia could be up to 100 times higher than initially believed.

In fact, researchers who point to a high prevalence of the phenomenon of synesthesia say that one in 23 people could have this strange phenomenon. 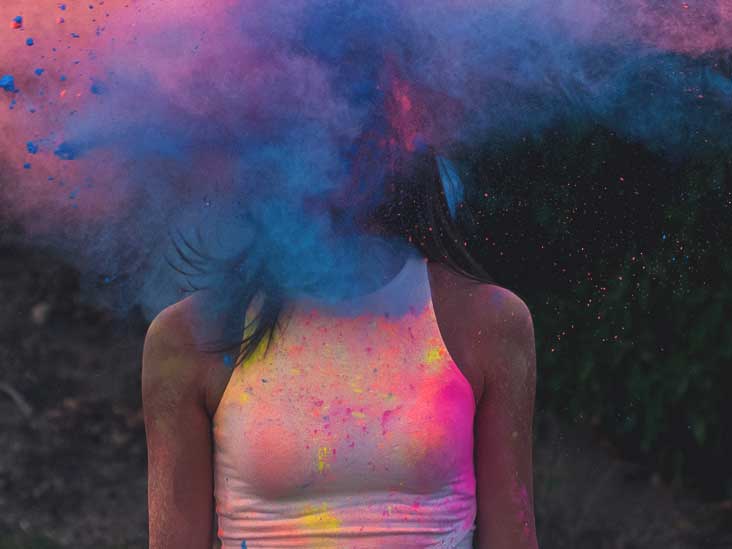 Obviously, these data have not been fully corroborated or demonstrated in a reliable way, so to affirm such a high prevalence of synesthesia could be an act of excessive optimism.

However, yes they have referred certain scientific data on the prevalence of synaesthesia, which although they have to be @nalyzed with caution, would indicate that the most common type of synesthesia is the ability to see colors when they hear letters or numbers , a phenomenon that could be present in up to 1% of the population.

Despite all provisional data, it is clear that synesthesia is still a confusing phenomenon, difficult to define and characterize, so it is not possible to comment clearly on how many people can possess this type of characteristics.

The discovery of subjective synesthesia is given to Lussana, who in 1883 gave evidence of the existence of these phenomena.

Likewise, this author dedicated himself to look for the relationship between colors and emotions

In formulating his investigations, he starts from the hypothesis that if letters and emotions easily evoke a color, why can not they also evoke a sound?

So, in his book ” Physiology of colors ” Lussana relates the following aspects:

?? The colors are characterized by an increasing number of vibrations (from red to violet), which provoke in the view different excitations, to which correspond different sensations, which then in turn are related to different and diverse ideas ??.

In this way, Lussana points out that there is a natural and physiological relationship between the harmonies of colors and sounds.

Likewise, he commented that the cerebral centers belonging to color and speech are contiguous and are formed in the same convolution, a fact that could explain the origin of synesthesia. Thus, through these formulations, we arrive at the first medical explanation of synesthesia in which sounds and colors are associated.

However, from these theoretical bases arise contradictions in themselves. That is to say, if the cerebral mechanisms commented previously are certain, these are in the brains of all the people or only in those that have synesthesia?

Obviously, if synesthetes are very rare worldwide, these brain characteristics should be classified as rare or anomalous.

Following this line of research, the famous psychiatrist Bleuer, who focused a large part of his professional career in the research of schizophrenia and psychotic disorders, was also interested in synesthesia.

The Swiss psychiatrist, together with Lehman, published the most important research on synesthetic phenomena.

Specifically, I study a sample of 576 people, of whom 76 were “audio-colorists”, that is, they had the peculiar ability to associate auditory and visual perceptions.

Through the study of these 76 people, we begin to look for a definition that can adapt optimally to the peculiar characteristics of the “colored hearing”, which ends up being the following.

“In certain individuals the hearing of a sound is immediately accompanied by a luminous and colored sensation that is repeated in an identical way while the auditory sensation is produced.

In this way, it is concluded that certain synesthetic people are capable of mentally reproducing visual sensations through the capture of an auditory stimulus.

Due to the particular characteristics of this phenomenon, which provides an infinite increase in the perceptive abilities of the human being, synaesthesia has become a subject of special interest in the artistic field.

In fact, no current shows as much interest in the senses and the expressive and perceptive capacity as in art, so it is very understandable that this discipline is the one that has made the greatest research efforts for the study of synesthesia.

In this sense, during the last 20 years, studies that relate music to painting, music to sculpture and music to color have gained special importance.

As we see, the study of the relationship between different artistic modalities arouses a lot of interest in research on sensory, cognitive and creative processes that people have.

Likewise, neuroimaging studies have shown how the neuronal plasticity of human brains can provide a large number of mental abilities.

In fact, it has been shown how the mixture of stimuli captured through 27 sensory mechanisms provide the particular “world” of human perceptions.

With regard to the relationship between music and painting, many authors seek synesthesia as their source of inspiration.

Likewise, artists who are not synesthetic, look to exploit this capacity, helping themselves with the mixture of sensory perceptions to develop their  creativity.

In this way, we can currently find a large number of pictorial works in which the modality relating to painting and music is related.

Especially, in the Renaissance you can find works such as Titian which is influenced by Giorgione, The Country Concert or Venus recreating with love and music , where a clear musical influence reflected in the pictorial pictures is visualized.

Regarding the relationship between musical tone and color, the main interest is in the ability to evoke colors through musical harmonies.

As we have said, synesthetic people are able to automatically associate a color with a musical note, always relating the same musical tone to a specific color.

The main characteristic is that each synesthetic person has particular association categories, that is, not all synesthetes associate the same color with the same musical tone.

On the other hand, non-synesthetic people do not make this automatic association between musical tone and color, so they can try to associate colors with harmonies in a more anarchic way and motivated by different variables.

In short, the phenomenon of synesthesia is very useful to realize that human beings are capable of influencing and being influenced, through art, by multiple sensory modalities.

Also Read: What is Hypersexuality?

As the Russian painter Kandiski affirms, “art is the language that speaks to the soul of things that are for her the daily bread, which can only be received in this way”.