Here we present a list of games and activities for deaf children  that you can do in the educational field and even at home to improve their autonomy and understanding of the world around them. Sometimes, it is difficult to know the type of exercise we can do with children who have some type of deafness. However, it is much easier than we think, since we only have to take into account the type of deafness and age.

Activities to capture sounds To improve the hearing of children who have some difficulty or even hearing impairment is very important to know how to capture the different sounds that exist. One of the possible activities that you can do to improve and encourage the capture of sounds of a person with deafness, are activities such as those that we will present below:

Materials: percussion instruments such as drum, triangle, cymbals etc. Procedure: With different percussion instruments such as the triangle, the drum and the cymbals, play with the child to do different guessing activities. Simply, you have to tell him first that he is going to hear a noise and then he has to guess how many times it has sounded or even if it has sounded. To do this, you first have to close your eyes. In the first few occasions, you will be notified that the game is about to start but little by little you have to go trying not to tell him anything with the idea that he tries to realize if an instrument is playing or not and deaf childs can also play games online like Wheely 9. Tips : In some occasions, due to the type of deafness that the child can present, it is normal that he does not listen to a series of sounds and frequencies. In this case, we will carry out the activities aimed at improving and encouraging the capture of the sounds with which we can work. This activity can also be done with supervision in the classrooms of the centers if the children are placed in pairs.

Materials : music and chairs. Procedure: It could be considered as the typical game of the chair and in fact it is like that. The objective of this activity is that the child once again knows how to identify that sounds are being produced around him, such as a song. On this occasion, we will use all kinds of music styles in order to get used to the maximum variety of sounds. We will play them for a moment and when you stop listening to them you will have to sit down quickly so as not to lose your site. Tips: At the beginning it is advisable to start with the best sounds or with rhythms that can be heard clearly as rock music, to finally use songs that are slower and slower and therefore, it is harder to identify if it is sounding or not. Activities to capture voices Like the exercises of capturing sounds, it is very important for your autonomy that you know how to identify when you are speaking or if there are people who are talking around you. Therefore, we present some exercises that can help the child with the recruitment of voices:

3. Does my chest tremble if I talk to you?

Materials: To carry out this activity, no type of material will be necessary. Procedure : Divide the children in pairs and place a couple of sentences on the board. These can be of type: Tomorrow it’s going to rain, I’ve eaten a sandwich at recess, hello, my name is Julia etc. The activity will consist of the children having to put their hands first in the chest of their partner, then they will begin to reproduce the sentences that have been placed on the board. The goal is for children to realize that our chest and neck are shaking when we are talking, so all sounds are generated in a similar way. These may associate that when there is a vibration in the environment or in our body we are talking and therefore, a sound is being produced. Tips: It is important that we start the activity with short words, so that it is difficult for them to identify if the partner is talking or not. Subsequently, we have to interspersed short words with phrases. 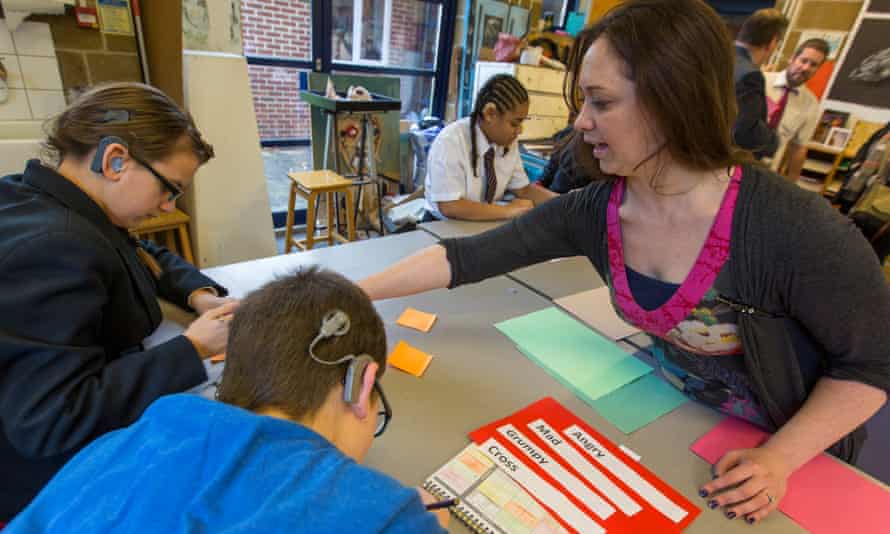 Materials: To carry out this activity, no type of material will be necessary. Procedure: Divide the children into groups of three. Next, you have to assign them to an animal that is in the sea or on land to communicate. This activity tends to please them a lot, since they have to talk using different voices in order to identify which person is speaking. You will place photos of different animals and they have to give them the voice that the animal can have. On the other hand, they have to imitate the gestures of the face when they are doing the activity. Tips : It is important to be directed during the exercise, since there will be children who, due to their type of deafness, can not imitate the voices and sounds of the animals, for this we will have to help ourselves with the positions of the lips and the lip reading and facial. Activities to see where the sounds come from On the other hand, it is also important not only to capture sounds and voices but to know exactly where they come from. This will allow the children to know how to locate the person or the object, something tremendously important for their autonomy and development in their daily life.

Materials: To perform this activity, no material will be necessary. Procedure : Once the children have been placed in pairs, one of them has to sit on the chair looking to the side and with his eyes closed. The other will be positioned behind the partner. Next, the partner that has been placed behind has to go to the side of the chair and start speaking short words. Meanwhile, the child who has sat down must identify from which side he is speaking. Once you have guessed it, the child who has this role will insert different positions around his partner. When the child who is sitting in the chair with his eyes closed has passed all the tests it is up to the partner who was standing to perform them. Once both are finished with the activity they will rotate so that they can do the exercise with different types of voice. Tips: It is important that the teacher supervises this activity so that the children do not run and use the space well, thus not giving clues to the companion who is sitting on where they can be. The phrases can be the same as those used in previous exercises.

6. Where is the object that sounds?

Materials: For this activity, it will be convenient to use the percussion instruments that we already used in the previous activity, or on the contrary, any object that can have a loud enough sound. Procedure: We will position the children in groups of three, then we will give each one an instrument and / or a material with which they can work making sounds of different frequencies. Then, one of them will be placed in a sitting position and with closed eyes. Subsequently, their colleagues have to take turns using the instruments previously given, while interspersing the different places from which they can be put. The partner who is sitting has to guess where they have been placed and if possible which instrument or object they have been playing. When you hit them, the roles will be exchanged. Tips: To facilitate the type of activity, it is advisable to fix the positions from which you have to play the instruments. Also, it is necessary to present a priori the sounds and the material that will be used. As they evolve in the detection of sounds and voices we can go skipping these indications. Activities to differentiate sounds and recognize them Finally, once you know how to pick up the sounds, the voices and where they come from, the most difficult thing is to identify exactly which object is playing and recognize it. This will allow them to face the problems that may arise in their daily life, for example, when crossing the crosswalk to know exactly what it sounds, where it sounds and where it sounds.

7. What object is playing?

Materials: Those materials that have been used previously and with which you are familiar would be fine. However, you should alternate objects with those who are not used to treat so that the activity is more profitable. Procedure: Once the children have been divided into groups of four. The teacher will distribute an object to one of them while the others meet with closed eyes. The one who has the instrument has to be placed in the middle and begin to sound the object or the instrument that has been given to him. The rest of the classmates have to identify what object it is and where the sound comes from. Once you have guessed it, the partner in the middle should rotate with the other child from the next group, who will have another instrument. Once all the children who have been placed in the center have passed through all the groups, other partners will carry out this activity, so that all are able to identify the objects. Tips: The teacher should be checking that the children who are in the center of the group are able to sound the object properly. On the other hand, they must also control the time during which they are making it sound.

8. How does the world sound?

Material: CD with sounds of the world: rain, wind, cars, instruments … and computer or music player. Procedure : This activity will be done as a group. Children should take a blank sheet of paper and a pen or pencil and write down the different objects or things that are reproduced on the CD. Once the clues that they wanted to play have been finished, they have to tell the teacher the sounds they have heard and the object or thing in question. For example, if they have heard rain they have to say that it has been rain. Tips: The tracks are recommended to be played two or three times, depending on the level of deafness that students have. At first, it is normal for them to have trouble identifying those sounds they are unfamiliar with. Also Read: 10 Activities for Children with Down Syndrome Conclusions Teaching the child who has a hearing disability, namely, identifying the different sounds that exist around them, as well as knowing how to pick up voices and differentiate them is a very useful and recommended task for this group. It is important that they are made from small in order to improve their qualities and promote that skill that has not fully acquired. This will allow you to improve your autonomy and over time, it will allow you to move only without having to have someone else help you. On the other hand, it will also improve your relationships with other people and communication skills since you will be able to identify when you are speaking without having to be notified that you are going to spe