Stress is a feeling of physical or emotional stress that can come from any situation or thought that causes feelings of anxiety, nervousness, or frustration.

When a person suffers from stress, he not only experiences psychological changes, but also undergoes a series of physical alterations and changes.

In this article we will talk about how these physical changes are made and explain the functioning of the stress hormones.

Stress is considered a state of tension and anxiety over time, which causes a series of alterations and a feeling of discomfort in the person who suffers.

In this way, Bruce McEwen defined in 2000 the stress as a real or supposed threat to the physiological or psychological integrity of an individual that results in a physical or behavioral response.

For its part, in medicine stress is referred to as a situation in which circulating levels of glucocorticoids and catecholamines rise.

So, with the first approximations to the term stress, we see two things clear:

To understand well the effects of stress, we have to keep in mind that when we suffer these states, our body suffers a lack of harmony in homeostasis.

Thus, homeostasis is a basic concept for understanding stress and its hormonal implication.

This concept refers to the idea that the body has an ideal level of oxygen in blood, acidity and body temperature.

In this way, these physical variables are maintained is an optimal state through homeostasis, which allows the correct physiological functioning of our body.

However, when a stressor appears, that is, an external world element that can destabilize us, our body moves away from homeostatic balance and our body variables can be modified.

So, given the threat of aggression, our body changes the homeostatic balance, and increases blood supply, heart rate, muscle tension or sweating among others.

But beware, this change does not in itself constitute a state of stress , as our body is activated more than normal in an emergency to be  able to respond in a faster and more effective.

If our body has more stressed muscles, sweat more easily and we have a higher heart rate, we will be more prepared to perform a rapid behavioral response than if our body is in a relaxed state.

In this way, stress appears when the alteration of the homeostatic balance and the corporal changes occur in a chronic way, that is to say, we have them  always and not only in specific situations that motivate the activation of the body.

If you suffer stress you will know well what I mean, since you will notice your body activated and physical sensations unpleasant at all times.

So when we are stressed, our body is at all times as activated as if we were responding to a limit situation.

In addition, the high activation that our body undergoes to the state of stress, causes many physical alterations, which make us more prone to get sick

This explains why, as we have said, our body stops working through a homeostatic state, and our levels of heart rate,  blood flow, muscle tension, etc. are altered.

And to a great extent, those responsible for these changes are the hormones we release when we are stressed.

Hormones are chemicals that are released by our brain to the whole body. The alteration of the functioning of these substances that are distributed by many bodily regions, immediately causes a series of physical changes.

We will then look at what hormones are altered in stressful conditions, how they work and what harmful effects they may have on our body.

Before reviewing the hormones, it should be noted that the stress response has a lot to do with the autonomic nervous system.

Thus, in stress states, one part of this system is activated (the sympathetic nervous system ) and the other is inhibited ( parasympathetic system ).

The sympathetic nervous system is activated during the time our brain considers an emergency (in cases of stress continuously). Its activation increases alertness, motivation and general activation. 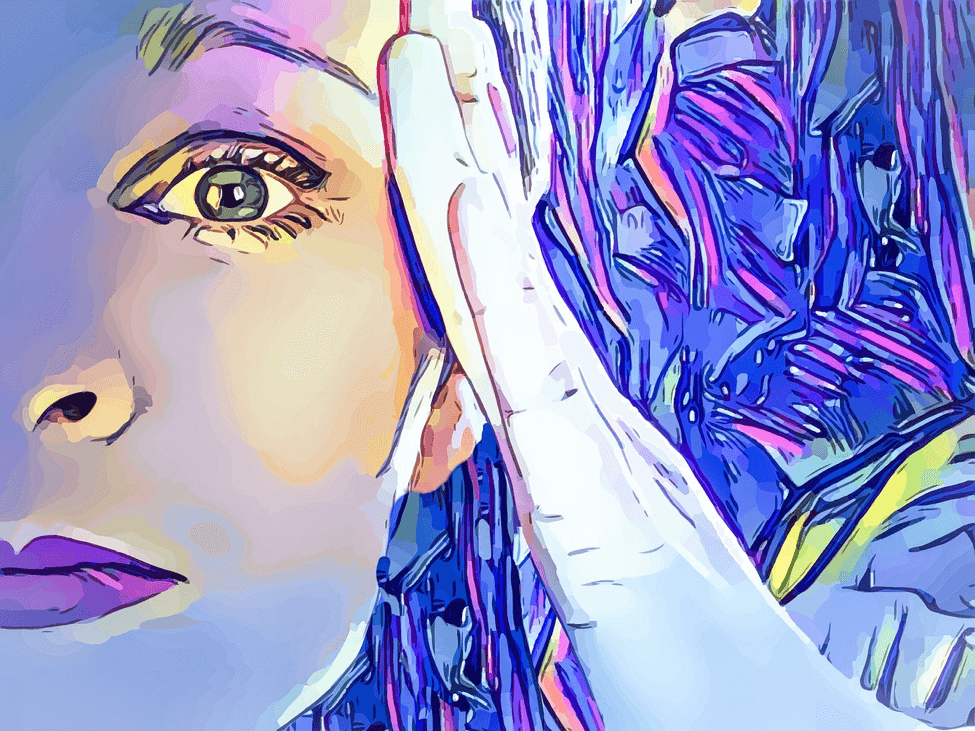 Also, this system activates the adrenal glands of the spinal cord, which are responsible for releasing the hormones of stress that we will talk about below.

The other half of the system, the parasympathetic nervous system, is inhibited. This system performs vegetative functions that promote the growth and storage of energy, so when the system is inhibited, these functions are no longer performed and can be considered.

The main component of the stress response is the neuroendocrine system, and especially the hypothalamic-pituitary-adrenal axis of this system.

As we have said, in the face of stressful events (or interpreted as stressors) the sympathetic nervous system is activated, which immediately triggers the  activation of the adrenal glands of the neuroendocrine system we are discussing.

This activation stimulates the release of vasopressin in the hypothalamic-pituitary axis. The presence of these substances stimulates the pituitary to release another hormone, corticotropin to the general circulation of the body.

In turn, corticotropin acts on the cortex of the adrenal glands inducing the synthesis and release of glucocorticoids, in particular cortisol.

Thus, the hypothalamic-pituitary-adrenal axis can be understood as a structure that, in the face of a stressful event, produces a cascade of  hormones that concludes with a greater release of glucocorticoids in the body.

The cortisol is considered the quintessential stress hormone because the body manufactures emergency situations to help us cope with problems and to make a quick and effective response.

In this way, when we are stressed the release of cortisol is triggered.

In normal situations (without stress) the cells of our body use 90% of energy in metabolic activities such as repair, renewal or formation of new tissues.

However, as discussed earlier, in situations of stress, our brain sends messages to the adrenal glands so they release larger amounts of cortisol.

This hormone, is responsible for releasing glucose into the blood to send greater amounts of energy to the muscles (to better activate our tissues), thus, when we are stressed we perform a greater release of glucose through cortisol.

And what does this mean? As we have been commenting, in situations stressing punctual, this fact does not have negative effects on our body, once the hormonal levels have returned to normal, once the emergency is over.

However, when we have stress on a regular basis, cortisol levels shoot continuously, so we spend a lot of energy to release glucose into the blood, and the functions of recovery, renewal and creation of new tissues are paralyzed.

This way, the stress can have a negative effect on our health, since we will have a hormonal deregulation.

The first symptoms of having high levels of cortisol during a prologando time are lack of sense of humor, irritability, feelings of anger, permanent tiredness, headaches, palpitations, hypertension, lack of appetite, digestive problems, and muscular pains or cramps.

The glucagon is a hormone that acts on the metabolism of carbohydrates and is synthesized by the pancreas cells.

Its main function is to allow the liver to release the glucose it has stored when our body has low levels of this substance and needs a greater amount to function properly.

In fact, the role of glucagon could be considered to be contrary to insulin . While insulin decreases glucose levels too high, glucagon increases them when they are too low.

When we have stress, our pancreas releases larger amounts of glucagon to provide more energy to our body, so deregulating our hormonal functioning, being especially dangerous for those people with diabetes.

The prolactin is a hormone secreted by the anterior pituitary gland in the brain that is responsible for conducting the stimulation of milk secretion of women during lactation.

Thus, when a woman is in the lactation period, she is able to produce milk through the release of being hormone.

However, in these cases, suffering periods of high stress can cause hyperprolactinemia .

Hyperprolactinemia consists of an increase in prolactin in the blood that immediately causes an inhibition of the production of hypothalamic hormone  , which is responsible for synthesizing estrogens, through different mechanisms.

Thus, by increasing levels of prolactin, the hormone that synthesizes female sex hormones is inhibited, causing a lack of ovulation, a decrease in estrogen and consequent menstrual periods such as lack of menstruation.

Thus, through prolactin, elevated levels of stress can cause dysregulation of sexual functioning in women and alter the menstrual cycle.

With stress, the functioning of three sex hormones: estrogen, progesterone and testosterone is also altered.

As we have seen previously, stress reduces the synthesis of estrogens, which can alter the sexual functioning of women.

However, the relationship between estrogen and stress is bidirectional, that is, stress can reduce the creation of estrogens but in turn, and estrogens may constitute a hormone that protects stress.

This fact was demonstrated by the Princeton University psychologist Tracey Shors, who performed an experiment with a total of 44 rats and checked their stress response between female rats without any modification and female rats to which they had been extracted the ovaries.

The progesterone is a hormone produced in the ovaries that among other things, is responsible for regulating the menstrual cycle of women and controls the effects of estrogens for these do not exceed their stimulation of cell growth.

Experiencing stress for long periods of time can decrease the production of this hormone, producing a progesterone imbalance that can lead to various symptoms such as decreased sex drive, excessive tiredness, weight gain, headache or mood swings .

When a person suffers stress on a regular basis, testosterone levels decrease, as the body chooses to invert its energy in the production of other hormones such as cortisol.

In this way, stress becomes one of the main causes of sexual problems such as impotence, erectile dysfunction or lack of sexual desire.

Also, lowering levels of this hormone can also produce other symptoms such as frequent mood swings, feelings of constant fatigue and inability to sleep and rest properly.

Thus, we see how stress is a phenomenon that is closely linked to the hormonal functioning of people, so that being subjected to stressful periods permanently can lead to serious psychological and physiological alterations.