The diseases of the bone marrow occur because there is a problem in one of the cell types described. For example, in leukemia (or white blood cell cancer), white blood cells do not work well.

The causes of these problems are of different nature and include both genetic and environmental factors.

To check if there is any type of marrow disease, tests are usually done both blood and marrow itself. Treatment depends on the type of disease and the severity of the disease, but it includes everything from medications to blood transfusions or bone marrow transplants.

The bone marrow is a spongy tissue that is found inside some of the bones, such as those of the hip or thigh. This tissue contains stem cells that can develop into any type of blood cell.

The stem cells created by the marrow are transformed into red blood cells that carry oxygen; in white blood cells that are part of the immune system and act against infections and in platelets that serve to plug the wounds by coagulating the blood.

Leukemia is a type of cancer that occurs in white blood cells, therefore, it is also known as cancer of white blood cells. As with all cancers, the disease occurs because too many cells are created in an uncontrolled manner.

White blood cells, which can be granulocytes or lymphocytes, develop in the bone marrow from stem cells. The problem that occurs in leukemia is that stem cells are not able to mature into white blood cells, they stay in an intermediate step called leukemia cells.

The leukemic cells do not degenerate, so they continue to grow and multiply uncontrollably, occupying the space of red blood cells and platelets. Therefore, these cells do not perform the function of white blood cells and, in addition, prevent the proper functioning of the rest of blood cells.

The main symptoms suffered by patients with leukemia are bruising and / or bleeding with any stroke and the continuous feeling of being tired or weak.

In addition, they may suffer the following symptoms:

The prognosis of this disease is better the fewer stem cells have transformed into leukemic cells, therefore, it is very important to see the doctor if you feel some of the symptoms to make an early diagnosis.

Treatment depends on the type of leukemia, age and characteristics of the patient. Among the possible treatments are the following:

Myelodysplastic syndromes (MDS) include a series of diseases that affect the bone marrow and the blood. The main problem with these syndromes is that the bone marrow increasingly produces fewer blood cells, even stopping production altogether.

Patients suffering from MDS may suffer:

There are several types of MDS, some are mild and can be treated easily, while others are serious and can even evolve into a leukemia called acute myelogenous leukemia.

Most people who suffer from this disease are over 60 years old, although they can appear at any age. Some factors can increase the likelihood of suffering from this disease, such as exposure to industrial chemicals or radiation. In some cases, MDS is produced by the chemotherapy treatment the person was following to treat another disease.

The symptoms depend on the severity of the disease. It is usual that at the beginning of the disease no symptoms are felt and, nevertheless, the disease is diagnosed because problems are found in a routine @nalysis. That is why it is very important to have periodic check-ups.

The general symptoms are similar to those of leukemia and include tiredness, difficulty breathing, paleness, easy infection and bleeding …

Treatment usually begins with medications and chemotherapy, although in many cases a blood transfusion or a bone marrow transplant is necessary. 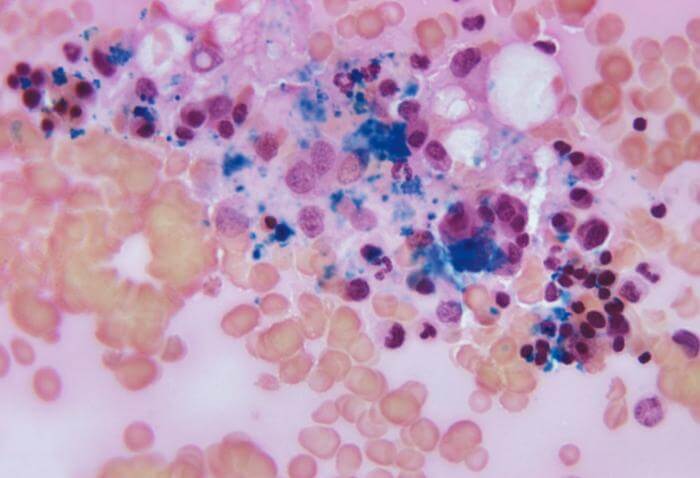 Myeloproliferative disorders are a heterogeneous group of diseases characterized by the inordinate production of one or several types of blood cells (red blood cells, white blood cells or platelets).

Patients who suffer from these types of disorders are more likely to have thrombi and hemorrhage. In addition, they may end up developing acute leukemia due to both the underlying disease and the treatment.

The symptoms and signs that patients with these disorders may suffer are the following:

Aplastic anemia is a rare disease of the blood that can be very dangerous. This disease is characterized because the bone marrow of people suffering from aplastic anemia, is unable to produce enough blood cells.

This disease occurs because the stem cells of the bone marrow are damaged. There are several factors that can affect stem cells, in addition these conditions can be both hereditary and acquired, although in many cases it is not known what is the cause.

Among the acquired causes we can find the following:

This disorder is progressive, therefore, the symptoms get worse as time goes by. At the onset of the disease, people diagnosed with aplastic anemia suffer symptoms such as fatigue, weakness, dizziness and breathing difficulties. In more severe cases they may have heart problems such as arrhythmia or heart failure. In addition, they can suffer infections and frequent bleeding.

The diagnosis of this disease is established based on the personal and family history of the person, a medical examination and some medical tests such as blood tests.

The treatment must be individualized for the person, but in general, it usually includes blood transfusions, bone marrow transplants and / or medicines.

Iron deficiency anemia occurs when the levels of red blood cells are very low or do not work well. This type of anemia is the most common and is characterized because the cells of our body do not receive enough iron through the blood.

The body uses iron to make hemoglobin, a protein that is responsible for transporting oxygen through the bloodstream. Without this protein the organs and muscles do not receive enough oxygen, that prevents them from burning the nutrients for energy and, therefore, can not function efficiently. In short, the lack of iron in the blood causes the muscles and organs not to work properly.

Many people who suffer from anemia do not even realize they have any problems. Women are more at risk of having this type of anemia due to blood loss during menstruation or pregnancy.

This disease can also occur because the person does not take enough iron in their diet or for some intestinal diseases that cause problems to absorb iron.

Treatment depends on why anemia has been caused, but it usually includes a change in diet and iron supplements.

Plasma cell neoplasms are diseases that are characterized because the bone marrow makes too many cells of this type. Plasma cells develop from B lymphocytes, which in turn have matured from stem cells.

When an external agent (such as a virus or bacteria) enters our body, lymphocytes often become plasma cells, which create antibodies to fight infections.

In addition, the myeloma cells give rise to a protein that is unusable to the organism, since it does not act against infections, the M protein. The high density of these proteins causes the blood to thicken. In addition, as they are useless, our body is continuously discarding them, so they can cause kidney problems.

The continuous reproduction of plasma cells causes tumors to be created, which may be benign or may develop into a cancer.

The following conditions are included in neoplasms:

If the tumors are produced in the bones they can cause hypercalcemia, that is, too much calcium in the blood. This condition can cause serious problems such as loss of appetite, nausea and