At the genetic level, most of the cases are due to the presence of a mutation in the CLN3 gene , located on chromosome 16 (Mareque Rivas, 2008). As a result, there is a systematic and progressive accumulation of proteins and fatty substances in different body tissues (Cleveland Clinic,  2016).

Regarding its clinical course, Batten’s disease generates a regression of development, characterized by loss of vision, cognitive deterioration,  ataxia and even premature death (Andrade-Bañuelos et al., 2012).

The diagnosis is usually made in the final stage of childhood or at the beginning of adolescence, based on clinical findings. Generally, the  visual deficit is the earliest sign of the pathology, being possible to suspect through an ocular examination.

In addition, it is necessary to perform a neurological and ophthalmological examination  , along with some laboratory tests such as electroencephalography and genetic study (Cleveland Clinic, 2016).

At present there is no curative treatment for Batten’s disease. The therapeutic interventions are aimed at symptomatic treatment  and palliative care, until the death of the affected person occurs (Mareque Rivas, 2008).

Batten’s disease is a rare pathology, of genetic origin and, in addition, it is a medical condition that is part of the pathologies  classified as lysosomal storage disorders (Batten Disease Support and Research Association, 2016).

In the case of Batten’s disease, the presence of genetic anomalies alters the ability of the body’s cells to eliminate substances and  waste. In this way, there is an abnormal accumulation of proteins and lipids (fatty substances) (Batten Disease Support and Research  Association, 2016).

In Batten’s disease, the most affected area is the nervous system and, more specifically, the brain. Because of this, it is also  called juvenile juvenile neuronal liopofuscinosis (National Institutes of Health, 2013).

Thus, this gradual storage of substances will cause serious damage to cell function and structure, which leads to the progressive deterioration  characteristic of Batten’s disease (Batten Disease Support and Research Association, 2016).

Specifically, the first description of this pathology was made in 1903, by a British pediatrician doctor, Frederick Batten, from whom he received his  name. In addition, this disease is also known as Spielmeyer-Vogt-Sjogren-Batten (National Institute of Neurological Disorders and  Stroke, 2015).

Although, Batten’s disease is one of the most common types of ceroid neuronal lipofuscinosis, it does not present a high prevalence in  comparison with other degenerative and / or neurological diseases (Genetis Home Reference, 2016).

Disorders of the ceroid neuronal lipofuscinosis type, show an approximate prevalence of 1 case per 100,000 people, in the general population. In addition, although no sex-related differences have been identified, it is a more common disease in Finnish regions, where its prevalence  reaches a figure of 1 case per 12,500 people (Genetis Home Reference, 2016).

In the United States, the prevalence of Batten’s disease and other related disorders has been at least 3 cases per 100,000  births (National Organization for Rare Disorders, 2007).

Specifically, Batten’s disease is part of the set of 6,800 rare diseases that affect 30 million people, that is, almost 1 in  10 Americans (Beyond Batten Disease Foundation, 2016).

As we have pointed out, Batten’s disease essentially affects the nervous system, so the most characteristic and frequent signs and symptoms in  this pathology will be related to the neurological area (Genetics Home Referece, 2016).

The first signs and symptoms usually appear in a subtle way, especially in the ages between 4 and 8-15 years of age, progressing  rapidly towards a regression of development (Genetics Home Reference, 2016).

Thus, some of the most common clinical findings include (National Organization for Rare Disorders):

The progressive alteration of visual capacity is one of the earliest symptoms of Batten’s disease. It usually begins during the first years  of life and, around 10 years of age, affected people have partial or total blindness.

Thus, throughout the course of ocular and visual degeneration, various pathologies and medical conditions are happening, among which we can highlight: 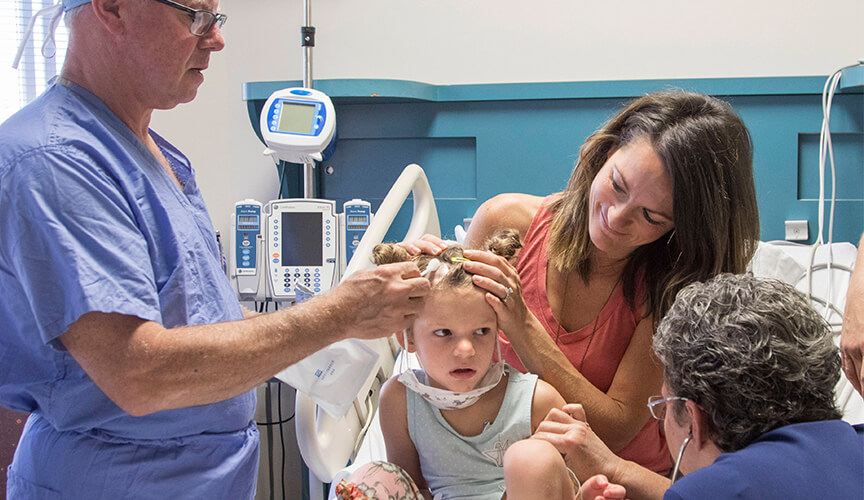 – Macular degeneration : this pathology affects the macula, an ocular region located in the retina. Specifically, this structure is  responsible for the control of the central vision, that is, the one that allows us to clearly perceive the details. Thus, degeneration affects the  cells of the latter, causing their injury and / or destruction and, consequently, the progressive deterioration of vision.

– Optic atrophy : this medical condition refers to the progressive deterioration or presence of lesions in the optic nerve. This is  responsible for the transmission of visual information from the eye areas to the nervous system, therefore, it is essential for efficient visual capacity  .

– Pigmentary Retinitis : this pathology is characterized by the presence and accumulation of dark deposits in the retina. Thus, one of  the symptoms that it provokes is the decrease of vision in low light conditions, of the lateral and central vision.

In other cases, the first symptoms of the disease become visible through the presentation of recurrent seizure episodes.

The International League Against Epilepsy and the International Bureau for Epilepsy define a seizure as a transient event of signs and / or symptoms due to abnormal, excessive or non- synchronous neuronal activity  .

In addition, we can distinguish two basic types of crisis:

– Focal seizures: epileptic events are the product of abnormal activity in a single specific area of ​​the brain, which can  occur with or without loss of consciousness, accompanied by rapid, rhythmic and involuntary movements of different body areas.

– Generalized seizures: generalized seizures are those in which the epileptic event, product of abnormal neuronal activity  , will affect all or most of the brain areas. In addition, within these, we can distinguish other types:

The accumulation of fatty substances in brain areas and the presence of recurrent convulsive episodes, produces an important neurological affectation.

In most of those affected, from the first moments a regression of previously acquired and developed abilities can be observed, thus,  these symptoms are usually categorized as cognitive deterioration.

Mild deterioration of cognitive functions may involve deficits in memory, language, alterations of judgment or thinking. A ome of the most common symptoms in mild cognitive impairment are difficulties in remembering names of people, losing the thread of a  conversation or a significant tendency to lose things. However, they can perform all the activities of their daily life with a variable degree of effectiveness  .

On the other hand, when the disease progresses and a degree of severe involvement is reached, at the cognitive level, most of the functions are  affected: memory, learning, language, orientation, speed of processing, etc.

In addition, this deterioration is usually accompanied by some behavioral changes and personality changes, mainly related to  mood, anxiety or psychotic episodes.

In the case of the musculoskeletal and motor area, many of those affected may begin to present various alterations, some of the most frequent  are related to:

– Paresthesia: sensations of burning, numbness, tingling, itching or stinging, which is usually felt in the upper extremities (arms and hands) and lower extremities  (legs and feet).

All these medical events will reduce the motor skills and, therefore, will limit the mobility of the affected person. In addition, in  many cases, it is possible to observe motor alterations similar to those of Parkinson’s disease.

As a consequence of all the alterations described above, in the most advanced phases of Batten’s disease, the affected persons usually  find themselves in a situation of total dependence.

Generally, they are in bed, unable to communicate and developing other types of medical complications that can threaten their  survival.

The most recent investigations have indicated that, the cause of most cases of Batten’s disease, is the presence of  various mutations (interruptions or changes) of the CLN3 gene, located on chromosome 16 (National Organization for Rare Disorders, 2007).

Specifically, this gene is responsible for coding a protein called CLN3, which is located in cell membranes, especially in lysosomes  (recycling centers) and endosomes (transporter organelles) (Bayond Batten Disease Foundation, 2016).

Although the specific function of this protein is not known exactly, Batten’s disease is related to the pathological accumulation of  fatty material in the tissues of the organism, especially the areas of the nervous system (National Institute of Neurological Disoders and Stroke, 2015).

Specifically, the substance that is stored in bulk is known as lipofuscin, a type of lipopigment, composed of proteins and  fatty substances. These types of substances are normally found in tissues such as the brain, eyes or skin (National Institute of Neurological  Disorders and Stroke, 2015)

As a consequence, the elevated levels of this waste substance will lead to the development of important cellular lesions in the affected areas and,  therefore, to the development of the degeneration characteristic of Batten’s disease (National Institute of Neurological Disoders and Stroke, 2015).

In addition, recent research has also managed to identify a pattern of heritability associated with Batten’s disease. This pathology has an  autosomal recessive genetic pattern, therefore, it will be inherited if the affected person presents two copies of the altered gene (Genetics Home Reference, 2016).

If a person inherits a single copy of the gene, it usually does not show signs and symptoms, therefore, it does not develop Batten’s disease (Genetics  Home Reference, 2016).

The diagnosis of Batten’s disease is usually made in the childhood stage, the presence of clinical signs and symptoms compatible with this pathology  makes it necessary to use different diagnostic approaches:

In addition to this condition, when parents know they have a genetic load compatible with Batten’s disease, it is possible to perform a  prenatal diagnosis through tests such as amniocentesis or chorionic villus sampling.

There is no treatment for Batten’s disease, since this is a chronic and potentially fatal pathology.

Although there are some symptoms that can be controlled or reversed, such as seizures, other medical problems with inevitable, such as  neurological degeneration (Cleveland Clinic, 2016).

The therapeutic interventions focus on palliative care, physiotherapy, neuropsychology and occupational therapy, with the aim of increasing the quality of life and the survival time of the affected person (Cleveland Clinic, 2016).