he Chromophobia , also known as cromatofobia or crematofobia is a persistent irrational fear or aversion to the colors.

It is a specific type of phobia and is characterized by the experimentation of an irrational and excessive fear towards colors. Its form of presentation can vary in each case, so the dreaded colors can be different in each individual.

Chromophobia is not a very common type of specific phobia, and data on its prevalence indicate that only a minority of the world population could suffer from this disorder.

The most commonly feared colors in chromophobia are usually red and white, although some studies suggest that a person with chromophobia can develop phobic fear of any color.

Data on its etiology are scarce today, however, it is argued that chromophobia is usually a conditioned response.

Chromophobia is an anxiety disorder. Specifically, it is an alteration that is included within specific phobias.

The dreaded element of chromophobia can sometimes be difficult to delimit. However, it is argued that the phobic stimulus of this disorder are the colors.

That is, a person with chromophobia has an excessive, irrational, uncontrollable and persistent fear towards colors.

It is usual that the typical fear of chromophobia does not appear as a response to all colors, but that it develops in a particular way towards one or some specific colors. In this sense, red and white seem to be the most feared colors in this disorder.

People with chromophobia experience elevated feelings of anxiety whenever they are exposed to their feared stimuli, that is, the color or the colors they fear in a phobic way.

In order to determine a fear of colors as belonging to chromophobia, it is necessary that this be:

The symptomatology of chromophobia is characterized by being anxious. This appears as part of the fear response that causes the dreaded color and is often highly unpleasant and distressing to the person.

The manifestations of anxiety of chromophobia are usually intense. Likewise, they are characterized by negatively affecting the quality of life of the subject and reducing their functionality.

In general, the typical symptoms of chromophobia can be divided into: physical, cognitive and behavioral.

The physical symptoms are probably the most unpleasant manifestations for the subject with chromophobia. They are characterized by producing a series of modifications in the normal functioning of the organism.

These symptoms are caused by an increase in the activity of the autonomic nervous system of the person. This increase in activity is generated by feelings of fear, so that physical manifestations appear when the subject is exposed to their feared color.

In general, a person with chromophobia can experience any of the following symptoms when exposed to their feared stimulus.

The physical symptomatology of chromophobia appears as a consequence of the elaboration of a series of irrational and incongruous thoughts about the dreaded color.

The colors do not constitute any real risk for people, but the subject with chromophobia interprets their feared color as highly threatening. 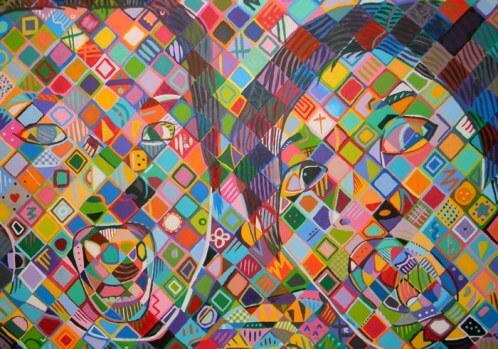 The avoidance refers to all the behaviors that the subject develops in order to avoid contact with their feared color. This manifestation can have wide negative consequences for the person, since the avoided spaces can be multiple.

On the other hand, the escape is the behavior that the subject sets in motion when he is in contact with his feared color due to the fear and discomfort that this causes him.

In order to establish the diagnosis of chromophobia, it is necessary that the following criteria are met:

Currently, chromophobia is considered a conditioned response. That is, this disorder appears due to the association of a certain color with specific negative attributes.

The most common is that the conditioning is carried out through the experience of negative or traumatic experiences related to the dreaded color. However, it can also be developed vicariously (visualizing images) or informative.

The treatment of first choice for most specific phobias (including chromophobia) is usually psychotherapy. Specifically, treatments that include the technique of exposure or systematic desensitization are usually applied.

These treatments are based on exposing the subject to their feared colors in a controlled and progressive way, with the aim of getting used to them, learn to manage their anxiety response in those moments and get over their phobic fear.

To facilitate the process it is usually useful to incorporate relaxation techniques, since these allow to reduce the state of tension and anxiety of the subject.