If we look at the name we see that it is composed of two words: psychology and dramatization. And how could we relate both?

Think of a play, when someone acts there is an intermediary state between fantasy and reality. The fantasy mode allows us to do things that are beyond our reach in real life such as expressing feared emotions, changing behavior patterns or exhibiting new traits. When we experience these experiences, even in a fictitious way, these new experiences can be part of the repertoire of our real life.

The session of psychodrama is the heir of the theatrical function, in this process, it is Moreno who had the merit of having transformed the classical theater function into the improvised of the Theater of Spontaneity and this one into the dramatization of the Therapeutic Theater, upon discovering the potential therapeutic of the Dramatization.

Therefore, psychodramatic techniques could be applied to the exploration of the psychological dimensions of a problem, such as education, psychotherapy and industrial relations.

Psychodrama is a group therapy that uses dramatic techniques and representations of different roles in order to get the individual on a stage, externalize their problems with the help of therapeutic actors and be free of episodes that alter their mental well-being.

Next I will mention the elements, instruments and stages of psychodrama.

The psychodrama session is defined by three contexts, namely social, group and dramatic.

The human being is a social being, and as such lives in society, is related and develops important links. The social context corresponds to the extragroup and social reality, and this context is the main generator of the material that is treated in psychodrama, it is in this context where the individual has developed and has become ill. In this medium the individual will relate the events that occurred in said medium, with their particular perspective.

It is spatially located outside the scope of work. It is governed by laws and social norms that demand from the individual, that integrates certain behaviors and commitments.

The group context is made up of both patients and therapists, the interactions that occur between them and the result of these interactions (customs, norms and particular laws). Within this context, the protagonists or themes are outlined.

The difference between this context and the previous one is the greater freedom, tolerance and understanding that are given in the group context.

The dramatic context is the staging by the protagonist and the director and it is a product of the protagonist, full of meanings and suggestions. It is artificial and fantastic and in it the protagonists play their roles in a “as if”. They interpret roles, interact in a particular way and can make and break scenes, modify events, exchange characters, alter the temporal context … Thus, it helps to reduce the intrapsychic tensions of Protagonist.

Within the therapeutic process, the separation between the contexts is taken care of, with the objective of providing the patient with a special area within which he feels safe and protected. 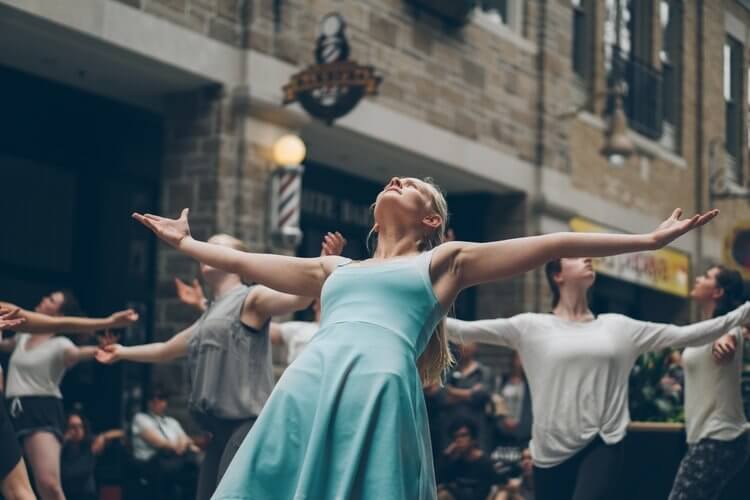 Instruments in a psychodrama session

The instruments present in a psychodrama session are 5, namely the protagonist, the stage, the auxiliary self, the director and the audience.

The protagonist is the key point in the dramatization, he is the author and actor of his work, with what he has the capacity to develop the argument from what he thinks or feels that he can faithfully follow or modify it at will. He is the person in which the group tensions are centered and that is why when he is elected and goes on stage he becomes the hero or her0ine of the group and can receive both successes and failures.

The stage is the place where the technique is applied, it is a protected field for the protagonist and a field to work in vivo. It has a rectangular shape, and one of its major sides is in contact with the wall that acts as a background, the other three sides correspond to the space intended for the auditorium.

The height of the stage (vertical dimension), exerts a singular influence on the protagonists since it facilitates the experience of the “as if”, everything is a fiction, therefore a commitment is acquired with the role that is played and not with the individual in yes.

The levels involved in the scenario are 3; the conception; growth and consummation.

In the growth, Director and Protagonist are located to plan the first scenes and create the dramatic context.

Finally in the consummation the Protagonist and the I-auxiliaries are located to carry out the Dramatization.

The auxiliary self is that which corresponds to the role of playing roles complementary to those of the protagonist and the performance of some psychodramatic techniques. Its functions are guide and therapeutic agent, social researcher, actor and objective observer objectified.

With respect to the first function, it is performed exclusively in the dramatic context. The auxiliary self has as its objective to investigate, that is to say, to verify that the roles or situations proposed are actually the ones committed, and where a link must be established with the protagonist. And on the other hand, comply with the slogans received from the director when the latter has interacted with the auxiliary self.

The auxiliary self as an actor has the function of creating and acting. Everything you have to say to the Protagonist will do it from the acting role. But in turn, he must be able to interpret the dramatization of the characters.

With respect to the function of observer, the auxiliary self is the one who can elaborate and share with the group the results of what they experience with it.

The director is in charge, as his own name suggests, to direct, in such a way that the technique and the method are aimed at the therapeutic. To exercise as a director, he must have a qualifying degree, must have completed three years of theoretical-practical seminars, must have received at least 100 hours of psychodramatic therapy and have been supervised for at least 50 hours.

The director must use the means, the techniques and look for the appropriate strategies so that the dramatized theme contains all the elements at a psychological and sociological level.

You must also pay attention to the following components: you must offer a safe environment, you must sign a commitment with the patient and the auxiliary self, you must establish when there are fees, as well as decide how the payment will be (individual or group). You must also specify the time of the holidays and establish the rules of the game, based on the absences.

With regard to the therapeutic process should monitor the operation of it, introduce appropriate changes, keep under control the link between patients, highlight the links that occur in group treatments, maintain the frame, prevent, give and complete the termination the therapeutic work.

The director exercises three functions; of a therapist; of producer and social @nalyst.

With respect to the role of therapist, this is not done in the same way throughout the psychodrama. In the first part you get the material, in the second you work with the material and in the third part you share it. That is, you must start the session, warm up, detect the emerging, choose the protagonist and intervene.

On the other hand, his role as producer is performed during the dramatization, which is when he must discriminate the material provided by the protagonist.

Finally, the role of @nalyst is exercised during the comments and @nalysis stage.

To finish with the elements, the audience is made up of the group of people, who are around the stage, patients and self-help. At the beginning of the psychodrama, the audience is also formed by the group and the functional unit (director and I-assistant), emerging the protagonist of the initial emotional climate.

The presence of other people in the Auditorium gives particular cohesion to the target group. In public psychodrama, the influential variable is the composition of the audience, whereas in the private psychodrama, the affective, discriminated and personal intensity of the members is the influencer.

Stages of the psychodrama session

Warming is a process that occurs naturally in organisms that are prepared for action. From a process, group interaction and communication among group members are encouraged. The idea is to draw a coalition of the expression of affective or aggressive real feelings that will try to resolve during the dramatization.

Within this stage there are two types of warming, unspecific, since the focus is on the group, facilitating the interaction and the decrease of tension, and specific, where the protagonist arises, which can be a theme or a person.

The dramatization is the core of psychodrama and consists of the interpretation of characters and the mobilization of emotions, seeking to resolve conflicts. The material contributed by the protagonist is concretized and captured on the stage.

Finally, in the comment stage, the members of the group are asked for opinions about the dramatization and experiences are shared.

It is a method of diagnosis as well as of treatment. One of its characteristic features is that the representation of roles is included organically in the treatment process. It can be adapted to all kinds of problems, personal or group, children or adults.

Through techniques such as auxiliary self, spontaneous improvisation, self-presentation, soliloquy, interpolation of resistance, new dimensions of the mind are revealed and, what is more important, they can be explored in experimental conditions “

One of the most contributing aspects to the psychodramatic method of the author Rojas Bermúdez, was to endow it with a theoretical body.

The basic structure of the personality and the core of the ego are based on a physiological model. When a mother breastfeeds her child, all the stimuli that are given in that actor are part of the relationship, if it is cold, if the mother becomes tense, all this is recorded and recorded in the memory trace. This process is repeated in all the basic functions of the subject and gives rise to the psychosomatic roles that make up the core of the self.

The structuring of the psyche is the result of the different interactions of the individual with their environment, first with the monitoring of genetic patterns and later as the result of social learning.