The children ‘s fears are one of the main causes of the experiences of anxiety in children and adolescents. In spite of the evolutionary character and the consideration of these as innate to the development of the people, it is convenient to pay attention to their presence because, if they do not intervene early in them, they can lead to phobic disorders.

Fear is an emotion experienced by the human being that can become an important part of learning coping strategies to everyday experiences.

The phylogenetic aspect of fears indicates that people inherit the ability to easily learn fear responses to certain objects and situations (phylogenetically “prepared” stimuli). This explains why we develop fear of spiders or snakes and we do not do to ducks. 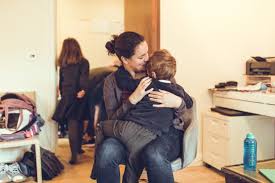 On the other hand, the ontogenetic aspect of these refers to the role of the fears in the adaptation and survival of the person during the stages of development of the individual.

Barlow defined fear as a primitive alarm that activated the individual in response to a present danger characterized by high activation and high negative affect. That is to say, it was that reaction produced before an external stimulus identifiable threatening and it was different of the anxious anxiety or apprehension in which it presented / displayed a cognitive and affective nature and marked orientation towards the future.

Marks, added that what distinguishes him from phobias is that in the latter there is fear, but it is a characteristic fear, because it was disproportionate, led to avoidance, was of an irrational character, surpassed voluntary control and produced discomfort significant.

Early studies began to take place in the 1920s. Watson and Rayner in 1920 experimented with a baby named Albert of 11 months of age. They tried to condition the child’s fear by associating two stimuli, the unconditioned stimulus was a loud noise to which Albert was afraid and the neutral stimulus with which he associated was an animal, a white rat. After several tests, the child cried every time he saw the rat and ended up generalizing all those objects with hair (coats, wool, other animals …)

Jones, in 1924, performed an experiment with Peter, a boy who had a similar fear to that of little Albert, a fear of rabbits. The objective of this author was to try to extinguish the fear that presented and for this it associated a positive stimulus, in this case food with the rabbit. After several trials Albert ceased to experience fear.

Subsequent to these first investigations not much progressed in the study of the fears due to the following reasons:

– The lack of attention of the adults to the fears of their children due to the trust deposited in the belief that they are dealing with aspects of the evolutionary development of those on which they do not have to act. This belief is reinforced as adults witness times when their children have more fears, whether to people, objects or certain situations, and then disappear.

In relation to this Mussen, Conger et al. in 1979 they concluded that most of the fears of pre-school children disappeared 1 or 2 years after their onset.

– The degree of family disruption caused by children’s fears is nil compared to other behaviors prevalent at these ages, such as aggressive and hyperactive behaviors . That is to say, a child who is constantly moving, agitated and jumping around the house draws more attention and causes greater disruption than a child afraid of the monsters, who barely speaks of it.

– The confidence of researchers to equate fears in adults with those of children, arguing that all investigations into the fears of adulthood are enough to understand and confront those of infants.

However, this period has been replaced in recent years, since the mid-1960s, by a growing interest based on the publication of incidence studies of these populations, the creation of instruments for assessing child fears, and the design of intervention strategies for them.

It may be that this resurgence of interest is due to the awareness of the importance of the reactions of fear in the development of the human being based on its role in the survival of the same, as well as the importance that the children themselves grant to their fears and the enormous amount of individual differences in the intensity of these, the appearance according to the age of one or the other, the prevalence according to sex …

King, Hamilton, and Ollendick in 1988 state that fears research shows that the class and content of fears are related to variables such as age, sex, socioeconomic class, frequency, and pathological behaviors.

Prevalence of child fears and phobias

Sandin in his studies concludes that the most frequent fears, with a prevalence of 46% were those to small animals (insects, mice, snakes or bats).

On the other hand, the ECA study concludes that fears are more prevalent than phobias. Specifically, the prevalence percentages report that 24% of people feared animals compared to 6.1% of phobias to animals, 18.2% had fears of heights, compared to 4.7% of phobias to heights, 6.8% to crowded places and 6.5% of people with fear of public speaking .

The review of several prevalence studies of the number of normative fears, based on the quantification of the fears referred by the person, ranges from 10 to 20 relevant fears.

In addition, it has been seen that the 10 most common fears are those related to the dimension of physical danger and death. Observing these in all ages, sexes, cultures and ethnicities.

The different evolutionary phases of the child and adolescents are associated in a more or less specific way to characteristic forms of fear. The varied and changing content of the fears seems to reflect a continuous process of cognitive maturation of the subject as it progresses in the stages of development.

The fears associated with each stage of development can therefore be considered as “evolutionary fears”, which may be normal (not usually very intense), specific to each stage, and therefore transient.

Most of the longitudinal studies about these indicate that they present a pattern of descent parallel to the increase in age, especially since the middle childhood. At 11 years stabilization is achieved. However, some fears increase as the fears of doctors, danger and death and social psychic stress, for example, not having friends .

Next, the contents of the fears will be exposed in relation to the evolutionary stages.

Contents of the fears according to the sex

In both children and adolescents, the female gender has higher levels of fear than the male gender. As for the existence of differences in the content of the fears, we find the following:

On the other hand, one study found that the fears that best discriminated between boys and girls were related to rats, spiders, snakes, mice, mysterious houses, being alone and having bad dreams.

For his part, Sandín assured that the fears that best differentiated boys and girls were those related to the dimension of small animals and minor damages, fears of animals such as beetles, lizards, bats, rats, mice, spiders and snakes.

Intensity of fears and age

In general, there is less fear as age increases, especially in girls, regardless of the existing fears. The decline occurs most notably at the end of childhood and during pre-adolescence and early adolescence.

Intensity of fears and sex

Virtually all relevant studies based on self-report evidence have found that girls and adolescents exhibit significantly higher overall levels of fear than boys and adolescents. Studies have also found a positive relationship between the female sex and the intensity of fear in each and every one of the fundamental categories of fears.

In general girls always show higher levels of fear for any of the existing categories of fear, although such differences do not seem so clear when it comes to clinical social fears rather than normative social fears.

For his part, Ollendick notes that the fears of having to go to school are equally intense in boys and girls, and that fears of cats are more intense in men.

The 10 Most Common Child Fears

Data on research conducted with European, North American and Australian populations reflect unanimity in the most common fears. All correspond to the category or dimension of fear of danger and death, except for one referring to the socio-evaluative dimension.

Returning one of the reasons given in the introduction regarding the minimization that most of the parents make about the fears, Sandin says that it is important to pay attention to these. The fear is usually accompanied by others and the existence of a large number of these may indicate a predisposition towards anxiety disorders and act as a marker of general psychopathic predisposition.