The depression in adolescence is caused by multiple physical, psychological, sociocultural and cognitive changes that require young people to develop new coping strategies.

After this difficult stage, the boys and girls will have established a sense of identity, autonomy and personal or social success.

However, if there are alterations in the boy or the girl, such as a depression disorder, adults may manifest serious problems related to their autonomy or academic or professional success. 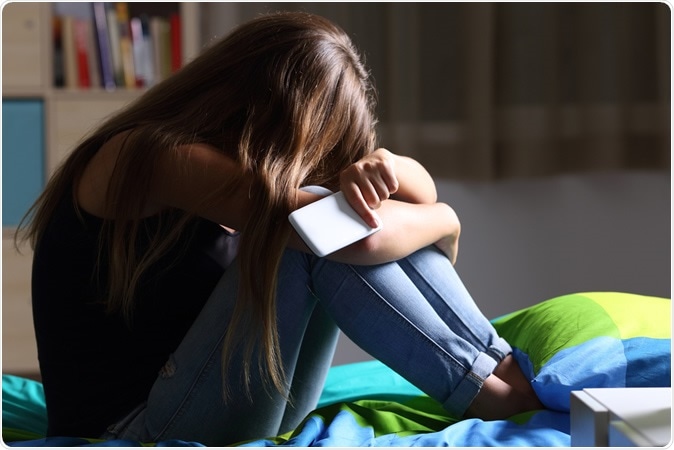 Causes and Symptoms of Depression in Adolescents

Adolescence is a time in which patterns of behavior and personality will be established. Therefore, it is not surprising that many people who have presented depression stories during their adolescence present a high percentage of continuity of this disorder.

In general, among the causes that explain the development of a disorder of depression in adolescence are suffering high levels of stress, conflict frequently and have developed some kind of interpersonal dependency.

According to the diagnostic classification of the Diagnostic and Statistical Manual of Mental Disorders (DSM-IV-TR, American Psychiatric Association, 2000), the criteria that determine a diagnosis of depression at any vital stage are very similar.

The most common symptoms found in children and adolescents who have depression are:

However, there are some characteristics that are much more frequent in the adolescent population, such as psych0m0tor retardation, hypersonic and delusional ideas.

Depression in adolescence can lead to other secondary problems, such as substance use or addiction, unwanted pregnancies or juvenile delinquency.

As you can see, there are numerous problems that are produced directly and indirectly by a depression disorder in adolescence.

Therefore, it is especially necessary to perform an early intervention that can alleviate the symptoms and that produces an improvement in the psychosocial well-being of the child.

How to treat depression in adolescence

Although it is recommended that you try to talk to the teenager in question, you will often receive bad responses or ignore you completely.

Given the difficulties and changes that teenagers are going through, getting into the game and arguing with them will not help.

Another characteristic they show in adolescence is that they are very emotionally unstable and have a tendency to drama, so it is not surprising that they cry, scream or rebel for everything.

When you find yourself in these situations, are understanding and serene and do not invade your personal space.

Let him relax and reassure himself before resuming the conversation and asking him about the real reason for his emotional state.

If you show empathy, letting you see that you have similar problems when you were a teenager, you will increase your child’s confidence toward you.

Children are taught that there are rules at home and that they have to accept them, even if they do not like them.

For example, you can tell your children that they cannot watch TV more than 30 minutes a day or that they have to go home before 8pm.

However, when your child reaches the teen stage, he becomes an active being of change, able to reason the rules and @nalyze them carefully.

It is therefore appropriate that you give him the opportunity to reason the rules that are imposed, to make him see that he is becoming an adult and that his opinion is important.

In addition, although it is difficult to control him at this stage, it is a positive indicator that your child rebels , since in this way he will become an adult  who fights for what he wants, instead of being submissive and abiding by the rules without questioning them .

In some cases, extreme tiredness or behavioral changes in adolescents are due to the drowsiness caused by sleeping fewer hours than they need.

During adolescence, the brain of boys and girls undergo a structural change that requires an increase of energy and rest, reason why in these ages usually present / display a characteristic psych0m0tor slowing – especially when waking up.

These hours of night sleep should follow a pre-established schedule, which should not be over-modified during the weekend and holidays, otherwise, it will be difficult for the teenager to get used to the weekly schedules.

Frequently, when a teenager is going through a depression disorder, he decides to give up the leisure activities he used to do, since they are no longer interested in them.

At other times, the abandonment of their leisure activities is due to the greater dedication that they must have in front of the study, since it becomes much more demanding with the adolescents.

To prevent this dropping of activities from isolating and influencing your mood , try to look for new activities focused on your current interests  or try to take back those you have abandoned, depending on what he or she prefers.

If among your leisure activities you find sports – especially group activities – it will be even more beneficial, as  children will be able to reduce their stress and increase their self-esteem , while acquiring healthy living habits – in one step vital in that they are  especially vulnerable to harmful habits such as alcohol or drug use.

These extracurricular activities should be distributed during the week so that they do not alter their schoolwork and do not influence the hours of study.

To achieve this purpose, help your child to carry out a schedule in which the activities are distributed throughout the week.

It also prevents you from starting several leisure activities at once; as you may become overwhelmed and abandoned because you feel you do not have enough time.

It is recommended that you gradually acquire them, so that you get used to the new schedule and new hobbies.

To achieve a more positive family climate, try to plan leisure activities with the whole family during holidays or weekends.

Going on a mountain trip, visiting a new city or spending a day in nature, will make you feel better with yourselves and with the rest of the family.

Creating a warm environment, where communication is enhanced and free time can be enjoyed, will make your teen son or daughter more open and  express their problems and concerns more often.

An important aspect that you should know is if your child behaves this way only when he is at home or during school hours.

Like children, adolescents may present situational behavior – behaving differently depending on the context in which they are.

Teachers can give you a lot of information that is beyond your direct observation, such as if you are isolating yourself more lately, if you have had a conflict with other students or teachers, if you’re academic performance has worsened, etc.

When a teenager has a depressive disorder, it is common for their academic performance to decline drastically.

This is due to the lack of concentration that they present, in addition to the low motivation to the study.

To help you, you can be understanding and help you deal with daily tasks, distributing study time to avoid spending several hours in front of books.

Encourage him to take breaks every 45 minutes and make this break time fun – it’s important that he gets frequent rewards or rewards.

Preparing your favorite candy, allowing him to spend 15 minutes playing a video game or watching TV, will help him increase his motivation in the face of study and increase his school performance.

Avoid focusing only on the negative aspects of your child’s behavior, since you will only get frustrated.

Also, whenever you refer to some negative aspect of your behavior, try to tell you how you should act to get positive results.

Otherwise, your teenager will feel lost and will not know how to act to get approval from others.

It is also necessary that you know how to value all those achievements that you have achieved for yourself – however small – and make you see all those you can achieve if you continue to strive.

On the other hand, it is very important not to compare with siblings, family or friends, since it can cause stress or jealousy, which will negatively influence the performance of the task.

You should even avoid comparing yourself before you present the depression disorder, since you now have to face new challenges before you give up as you used to in the past.

What you can do is to have reference models, such as setting an example of a historical or famous person and tell you the obstacles and achievements that he had in his life.

Adolescents often benefit from vicarious learning – that which is produced through the behavior of others – so it is not surprising that they develop a special interest in their idols, characters of fiction or celebrities.

They idolize other people or characters they would like to resemble – physically or because of the abilities they possess, such as being a successful singer.

A very pronounced weight loss may be an indicator that the adolescent is having some physical and / or psychological problem.

An indicator that is usually present in depression disorders in adolescents is usually loss of appetite, so it will be helpful to be aware of the amount of food you eat and changes in relation to your weight.

In addition, these changes in food and body weight may be related to another disorder of eating behavior – which often occurs in adolescence.

In this case, it is especially important that the adolescent begin some therapy, since these are problems that can have serious consequences in your body.

On many occasions, adolescents make threats in connection with suicide with the sole aim of drawing the attention of the people around them.

However, it is difficult to distinguish when they intend to draw attention and when they have concrete plans to make a suicide attempt.

Therefore, due to the repercussions of a suicide attempt or consummate suicide, you must be especially cautious and take certain precautions, such as:

If you detect enough indicators that can reveal the presence of a depression in your child, consult a specialist to tell you if it is necessary or not to perform some type of therapy.

Do not underestimate this problem or you conceive it as something temporary, since it can have disastrous consequences on the socioemotional and affective development of the adolescent in question.

As you see, depression is adolescence is a complex disorder and with some specific particularities.