The night terrors are similar to nightmares interruptions, but much more dramatic. They affect children especially, although they can also occur in adults and babies.

They are characterized by a series of symptoms during sleep: shouting, sweating, alterations and high cardiac rates.

Although the symptoms may resemble nightmares, they occur during the SOL (slow-wave sleep) phase, and therefore are not produced by dreams. 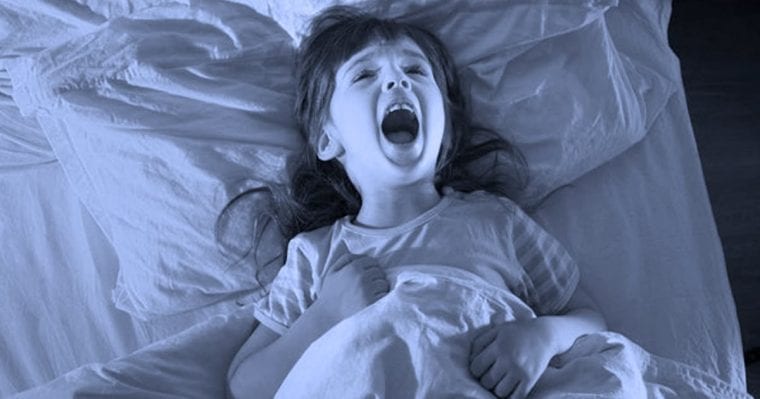 If you watch a child who has a night terror, he seems terrified, although unlike nightmares, the next day they do not usually wake up. On the other hand, it is difficult to wake them when they have them.

It is estimated that 5% of children can experience these parasomnias, reaching 1% of adults.

When do night terrors occur?

Night terrors are given during a normal sleep stage a series of phases occur. Each phase is associated with a certain type of brain activity and dreams occur in the REM phase.

Night terrors occur during the non-REM phase called SOL (slow-wave sleep), so it is technically not a dream or a nightmare. Rather, it is a sudden reaction of fear that occurs during the transition from one sleep phase to another.

They usually occur after 2-3 hours of the child going to sleep, in the transition from the deep SOL phase to the REM light phase.

Night terrors in children usually occur between 3 and 12 years, with a peak of intensity at 3 and half years of age.

It is estimated that approximately 5% of children are affected and affected by both boys and girls. They usually resolve themselves during adolescence.

In children under 3 and a half, the highest frequency is usually one night terror per week. Other children often occur once a month.

A pediatrician can help these children by conducting a pediatric evaluation that excludes other potential disorders that may be causing them.

Night terrors in adults can occur at any age.

The symptoms are similar to those of adolescents, although the causes, treatment and prognosis are different.

In adults, night terrors can occur nightly if sleep is not needed, proper diet is not in progress, or stressful events are occurring.

In adults this disorder is much less common and is often corrected by following a treatment or by improving sleep and lifestyle habits.

It is currently considered a mental disorder and is included in the DSM.

A study conducted with adults with night terrors found that they shared other mental disorders. There is also evidence of a relationship between night terrors and hypoglycemia.

When an epidsodium occurs, the person can get up screaming or kicking, and may even leave the house, which can lead to violent actions.

It has been found that some adults who have received long-term intrathecal therapy show similar symptoms, such as feelings of terror in the early stages of sleep.

Nightmares and terrors are different:

These are the typical symptoms of an episode:

Night terrors usually occur by over activation of the central nervous system (CNS) during sleep, which may occur because the CNS is still mature.

Approximately 80% of children who have this disorder have a family member who has also experienced similar sleep disturbance.

Terrors are seen in children who:

This disorder is usually diagnosed based on the patient’s description of the events or symptoms.

The practitioner can make psychological or physical tests to identify what conditions may contribute or what other disorders coexist.

If the diagnosis is not clear, other techniques can be used:

Polysomnogram: is a test that measures the wake-sleep cycle. It measures brain activity (electroencephalogram), movement of muscles (electroculogram), eye movement (electro-oculogram) and movements of the heart (electrocardiogram). For this test you will spend one night in a medical center.

Treatment for night terrors that are not frequent is usually not necessary.

For the parents it is stressful, although in reality the child does not suffer damages.

A parent can simply return the child to bed and try to relax by talking to him or her, and often the episode ends on its own.

Licking or screaming at the child may make the episode worse.

If this disorder causes significant discomfort, treatment may be required.

They usually occur in families who have had night terrors or other sleep disturbances.

Some adults with terrors also have a history of anxiety or mood disorders.