The Seasonal Affective Disorder is a very common condition that affects people of all ages and is characterized by a feeling of sadness and discouragement.

When the end of autumn arrives, the days begin to be noticeably shorter and the temperatures drop, and you begin to feel sad, discouraged.

Fortunately, there are many treatments you can follow to relieve your symptoms.

This condition is also known as “winter depression”, because it is precisely a type of mild depression that usually appears when winter begins.

Many people think that it is simply a change of mood or seek other explanations for their emotional disturbances, however, it is  a disease and as such should be treated.

The specialists affirm that the cause of this particular type of depression, is the lack of sunlight. Hence, it occurs more frequently in the winter  and especially in those countries of the northern hemisphere that have very long winters.

It does not seem to be a coincidence that in those same countries, those of higher latitude, there is a greater number of suicides.

It is estimated that in the entire world, 6 out of 100 people suffer from seasonal affective disorder. As in other types of depression, it affects women more  than men.

Apparently, this type of depression could be caused by a variation in the secretion of certain hormones and neurotransmitters in the brain.

When the temperature begins to fall and there are fewer hours of sunlight, the concentration of certain substances in the brain, such as serotonin and melatonin for example, could vary and cause the symptoms of seasonal affective disorder.

The melanin is a hormone produced by the pineal gland. This hormone is responsible for regulating the sleep cycle. When it is outside normal levels, it generates different types of disorder. One of them is directly linked to seasonal depression.

During the winter you are naturally less exposed to the sun than during the summer. In conditions of low temperature and darkness, the body secretes more  of this substance, and this could cause alterations in mood and make you feel sleepy, not wanting to do anything.

This is a neurotransmitter that plays a very important role in almost all types of depression. During the winter and before the scarce exposure to sunlight, the amount of serotonin in the body decreases. When this happens, you may feel more sad and distressed.

Many antidepressant medications act by just regulating serotonin levels in the brain .

Alteration of the biological clock

Like all people, you have a circadian rhythm, which is what lets you know when you need to sleep and when you have to get up. At the beginning of winter the levels of sunlight decrease significantly and this rhythm can be altered. In certain people this causes feelings of anguish and depression.

The reasons why this condition appears in certain people and not others are unknown, but this is surely related to certain  factors of each person, factors that have not been discovered yet.

Although it is much less frequent, there is also a type of seasonal affective disorder that appears in summer.

How to know if you suffer from seasonal affective disorder

The symptoms that a person with this type of disorder manifests, are very similar to those of other types of depression. However, sometimes it is more  difficult to diagnose because the fact that it happens at a certain time of the year is very disturbing.

Suppose you come doing your activities in a completely normal way. You are even excited and motivated by the prospect of new  projects and activities in your life. 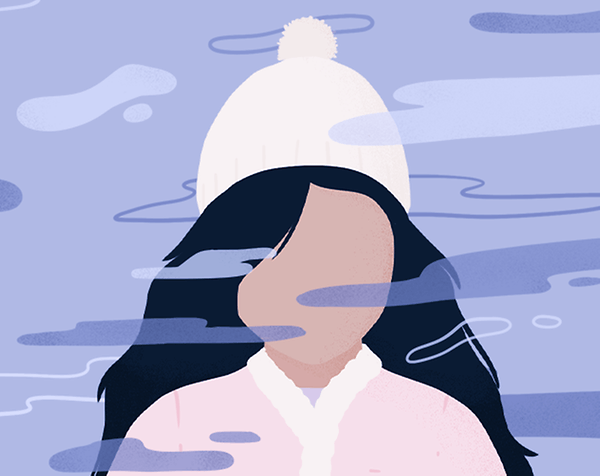 However, the end of autumn is approaching and you begin to feel different. You yourself do not understand what is happening, but the discouragement begins to invade you  and you only think about staying at home and sleeping. When winter sets in, everything gets worse. Then it is very likely that this type of depression  is affecting you.

A person seems to be fine, and others do not notice anything particular, but suddenly begins to be more irritable. She is often annoyed by situations that previously went unnoticed. The marked feeling of self-criticism in people suffering from this type of depression is very noticeable.

Although the person is very responsible, when he begins to suffer from this disease, he does not have the willpower to continue normally with his commitments.

In the case of students, there may be a decrease in academic performance. If you work, this lack of energy will also be reflected in your work environment  .

One of the characteristic symptoms of this depression picture is the change in the sleep cycle. Without understanding why, you feel sleepy during the day and at the same time you have great difficulty falling asleep at the times you usually do it. Here you can learn about some of the most common sleep disorders.

Generally this type of depression generates much desire to consume carbohydrates and sugars in general. The other types of food are displaced, and you can gain weight.

If you have the famous winter depression, surely you no longer feel like meeting with friends or attending any social event. You start to make excuses not to go anywhere, because a depressed person does not want to share leisure time with other people.

If when the winter ends the symptoms diminish or disappear, then surely it was the seasonal affective disorder.

In other cases, the symptoms may not be relieved because the disease progressed to chronic depression or other disorders. Hence the importance of following the evolution of these symptoms over time.

How seasonal affective disorder is diagnosed

As with many other types of depression, at the beginning it is common to confuse this disorder with a mere state of sadness .

Even when it affects teenagers, they can be seen as rebellious young people who do not want to study or work. When these same young people no longer  feel like leaving, especially with other young people, it is when parents begin to worry.

When you go to a professional consultation, the first thing you do is rule out pathologies such as hypothyroidism, mononucleosis, chronic anemia, among  others. Any organic picture that shows similar symptoms should be discarded through clinical @nalyzes and specific questionnaires.

The psychiatrist will be the one who finally diagnoses this disorder, and it will be he who suggests the most appropriate treatment. Generally, and whatever  the treatment suggested by this professional, support with a psychological therapy can be very important.

Many of the treatments for seasonal affective disorder are the same as for other types of depression. However, each person is unique, and it  is the professionals who determine the most appropriate treatment.

Among the main alternatives, and specifically for this type of depression, are the following:

Because the low exposure to light is one of the main triggers of this disease, the compensation of this lack usually gives very good results.

In the case that the picture is presented in a mild way, it may be enough for the person to spend more time in the open air.

Taking direct sun sessions has an immediate effect. If symptoms are acute and persistent over time, specific exposure techniques are used  .

In an “artificial” exposure treatment, the person is exposed for approximately 45 minutes to a radiation source similar to solar radiation. The  objective is that the retina is the one that absorbs that radiation and the effect is reflected in the brain.

This type of therapy usually lasts until summer. In all cases, it is supervised by a doctor, since it can present certain  contraindications. For example, people who suffer from photosensitivity and their skin is assaulted by exposure.

As in the treatment of other types of depression, psychological therapies in their different currents can be of great help.

In this case, the psychologist is the one who determines the strategy to follow. This can vary according to age, intensity of symptoms and other  characteristics of each patient.

It is possible that the psychiatrist orders a treatment with antidepressants, at least until summer arrives.

With this type of medication we seek to regulate the concentration of serotonin and other neurotransmitters in the brain, which influence the mood  of people.

Also Read: The 9 Most Rare Psychological Syndromes (Children and Adults)

Occasionally, and when an abnormal functioning of the pineal gland is confirmed, the endocrinologist can also supply specific medication. In  this case, it will play the role of regulating the levels of melatonin and other hormones.

So you know, if you start to feel sad and distressed when winter comes, you may be suffering from this disorder and it is best  to consult your doctor.