When we speak of depression, we are referring to a psychological disorder that can become very serious and that seriously interferes with the person’s life.

Depression affects the entire psychosocial functioning of the person and affects not only the person who suffers, but also their environment and the entire society, given the economic impact of depression in health services.

In this article I will talk about the four fundamental stages that a person with depression undergoes.

What are the phases of depression?

We can classify the stages of depression in 4 stages, which we present below:

First stage: the origin of depression

Some years ago, some theories supported that depression was the result of a series of biochemical changes that happened in our body. Subsequent studies propose that for a person to be depressed, it is necessary that in their environment a situation that the person interprets as unpleasant originates.

The origin of the disorder can be caused by a series of vital changes such as illness, divorce, loss of a loved one, dismissal, family problems and other psychological disorders.

As we can see, there is no standard key moment for all people, but rather any experience that the person interprets as a loss or an unpleasant change that he or she can not adapt to or can not face.

Not all unpleasant events that generate discomfort or sadness trigger a depression. Sadness is a basic emotion that has a certain biological function.

The function of sadness is to decrease the energy to plan how we can deal with this loss. Sometimes this period of sadness lasts longer because the person feels unable to cope with this new situation.

When this sadness is prolonged, the person begins to become depressed and a series of emotional changes, changes of thought and changes in behavior follow one another.

This succession of changes produces modifications in the biochemical functioning of the central nervous system. The brain secretes fewer neurotransmitters and makes depression easier to install.

We can classify the loss of reinforcers in the following way:

a) Great stressor or loss of positive reinforcers

Sometimes, people experience the loss of a very powerful reinforcer, an event such as a divorce, illness or death of a loved one, dismissal, etc. They cause the person to experience this situation as a very unpleasant event.

b) Accumulation of small losses or small stressors

The people we develop in different areas. When a person does not feel fulfilled in his work, he also has a bad spell with his partner, has argued with his brother and does not usually go out much with his friends for lack of time, suddenly a small insignificant event such as, for example, it breaks the television, it makes it overflow and the depression starts.

The human being experiences positive and negative events, but when the negative input surpasses the positive, the first invalidates the second.

For example, if a person suffers from a disease such as fibromyalgia, which is very painful, and this prevents him from enjoying, even though he has his family, his friends are not able to experience pleasure.

This onset of depression occurs when a person experiences a change in their life, such as an ascent at work.

At first it is a positive thing, however, this new role involves traveling more often, greater responsibility, greater workload, high levels of stress, bad relationship with your former colleagues.

When a person is experiencing this series of events, a series of losses are produced little by little.

This loss that originates in a non-direct way causes the person to reconsider his life and think about what he has done in the world, if he has achieved what he has always dreamed of, etc. Sometimes, the person does not feel satisfied and begins to get depressed.

When experiencing any of these losses, the person feels sad. This sadness is prolonged and established, the person is not able to cope with this new situation and begins to become depressed.

This loss of reinforcers is experienced as critical and thinking that it can not cope produces a great psychological impact.

This emotional pain manifests itself in two changes, on the one hand, the automatic negative thoughts and on the other hand the unpleasant emotional and physical sensations.

As a result of thinking and feeling in this way, the person has less and less desire to do things. There is a general state of inhibition, apathy and lack of motivation, leading to the next stage.

This emotional pain manifested through thoughts and physiological sensations cause the person to stop doing those pleasant activities.

It is when inertia appears. It is understandable that if we have a low mood and thoughts are negative, we are not very predisposed to do things.

What we fail to do first are pleasurable activities, that is, those we like to go out with friends, play sports, read, listen to music, eat with family. These are the voluntary activities that we do to enjoy.

What happens is that when the possibility of doing a pleasant activity arises, the thoughts that invade the mind of a depressed person are for example “I do not feel like it”, “I do not want them to think I’m wrong”, “I do not want to be asked “,” I sure do not have a good time “, these thoughts generate discomfort, so the person chooses not to leave and stay at home.

When a person decides not to perform this activity in the short term feels relief, since he has managed to escape from this situation that generates discomfort, but in the long term generates more loss, since he loses the opportunity to enrich himself from this activity.

To stop doing nice things is a loss of reinforcers that adds to the loss of initial reinforcers, thus closing the circuit of depression.

In this stage the person continues to perform the obligatory activities, that is, those activities that without generating pleasure are necessary to live, such as working, doing domestic chores, cleaning, etc.

When we stop doing things that we like, we can not recover the adequate level of positive reinforcers, thus worsening depression. It is then when the person begins to feel worse.

Occasionally, the depression reaches a level where the person is unable to carry out compulsory activities such as working, taking care of their family, performing housework and self-care tasks such as grooming.

What symptoms does a depressed person notice?

Depression involves changes in our mood. Sadness would be the symptom par excellence and the best known at a general level.

However, people with depression, in addition to symptoms such as sadness, also experience feelings of depression, grief or unhappiness.

And not only do these feelings appear but they can also experience irritability, a feeling of emptiness or nervousness.

Sometimes, the person verbalizes that he is unable to cry. Parallel to these negative emotions, positive emotions or the ability to enjoy everyday things (anhedonia) are reduced.

Apathy and lack of motivation are also important symptoms that connect with the negative thoughts of hopelessness, uncontrollability. In more serious cases the person suffers such inhibition that the fact of getting out of bed and getting clean is practically impossible.

In addition, cognitive performance is impaired leading to problems of concentration that can affect the workplace.

Problems also arise when making decisions that are not necessarily relevant. The person experiences fatigue and loss of energy, even though no physical effort is made.

Associated with this fatigue can also be sleep problems, both initial insomnia (ie the person has difficulty starting the dream), as maintenance insomnia (where the person is able to fall asleep but has awakenings during the night).

In depression there are also changes in appetite and weight, as well as decreased sexual desire, etc.

Negative thoughts revolve around ourselves, others and the future. People have excessive feelings of worthlessness, self-reproach or guilt.

And why is not everyone getting depressed?

Not all people in the same situation develop a depression. For example, not everyone who divorces develops a depression.

Different investigations have shown that there are a number of variables that predispose us to suffer a psychological disorder.

That is, there are a number of elements that increase the likelihood of suffering a psychological disorder in the event that there are conditions that trigger it.

The different studies have shown that there are a number of variables that predispose us to suffer depression.

Psychological vulnerability, what is it?

One of the factors they have detected is the lifestyle. Those people who fill their lives with pleasant activities that make them feel good are less vulnerable to becoming depressed. The more areas available to the person who satisfies them, the less likely they are to become depressed.

Another factor that makes us vulnerable is the cognitive style, that is, the way we think. Throughout our lives we have learned different schemes or beliefs around which we have built our lives.

If the content of these beliefs is inadequate, we will be more vulnerable to suffer a depression after a loss of reinforcers.

The third factor that can make us vulnerable to depression is the deficiencies in the social area. These deficiencies could be due to a deficit of social skills or due to an absence of social support.

The last factor is the ability to solve problems. Having problems is part of the life of the human being.

When a person experiences a change interpreted as aversive and can not cope with this is when we are faced with a problem.

Sometimes the person does not know a specific and structured procedure to evaluate what is happening, find alternatives and make the most appropriate decision to their circumstances.

Biological vulnerability would be understood as the ease of a person’s body to reduce neurochemical substances once the process of depression begins.

This means that if we have some of the factors mentioned above, in the face of a loss of reinforcers, the chances of developing a depression will be greater.

In depression there are a series of stages through which the person passes, which we summarize below:

The first is the origin of the disorder, where there is a loss of reinforcers that the person interprets as an aversive event.

The second stage corresponds to the establishment of the disorder, where the person begins to think, act and feel in a different way, this is where the first changes take place.

The third stage is the one that refers to the behavioral inhibition of pleasant activities, where the person with depression stops doing things that once liked him and generated pleasure.

The fourth stage corresponds to the behavioral inhibition of compulsory activities, the person with the disorder stops participating in activities that society considers mandatory, such as self-care and personal hygiene, family care, work, etc.

Depression is a psychological disorder that must be treated by a professional who will teach the person with depression a series of strategies to be able to face the problem. 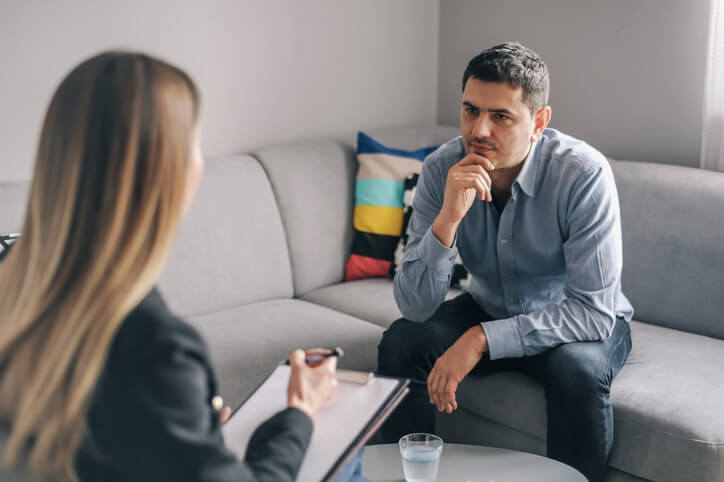