The stages of mourning explained in Keble Ross’s model are denial, anger, negotiation, depression and acceptance.

When a loved one dies or lives a situation of loss, people react in a certain way.

Usually we experience feelings of sadness, we feel down and we develop what is known as a duel.

From the psychological point of view, mourning makes an extremely delicate and complicated time to manage, so it is very important to know the characteristics of this 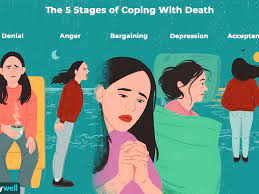 situation that all people live at some point in life.

In addition, when experiencing mourning situations it is usual to experience some confusion and have doubts about whether the different feelings that are appearing are normal or not.

We all know that after a significant loss we live what is known as grief, that is, a complicated situation in which we experience a series of feelings that are closely related to the person we just lost.

However, the feelings we experience during the course of the duel can be very intense, and often can be dangerous since it is not usually easy to adequately overcome these moments.

So when we lose a loved one we may experience symptoms very similar to those that occur in a depression or other psychological disorder.

As we see, mourning can be more complex than it seems at first sight, so before explaining its 5 phases, we will review its general characteristics.

First of all, the simple @nalysis of the word mourning which comes from the Latin folium that means pain, already gives us enough clues on the meaning of this psychological concept.

Thus, as Gomez and Rancho indicate in their review, mourning refers to the natural reaction that people make to the loss of a being, object or significant event.

Likewise, mourning refers to the emotional and behavioral reaction that a person experiences when he loses a significant affective bond.

Even in less concrete situations such as the abstraction of concepts such as freedom, ideals or in current changes such as moving to another city or changing a lifestyle can also experience grieving processes.

Thus, the concept of grief includes psychological, physical and social components that are expressed through emotional reactions of suffering, sadness or distress.

It is also worth noting the normality of this process, that is to say, experiencing grieving reactions in situations such as the ones just discussed is considered a completely normal situation and nowhere is considered a psychological disorder.

What does the duel depend on?

As we see, there are many situations in which you can experience grief; however, it is not the characteristics of these situations that determine the occurrence of a grieving process.

In this way, not all death automatically entails the appearance of a duel, since for this it is necessary that the person subject to loss has special significance and significance.

Thus, the essence of grief is affection or attachment, as well as the sense of loss.

Similarly, the intensity of the mourning process does not depend on the nature of the lost object, but on the value attributed.

Generally, there is some consensus in interpreting the different emotional reactions that are experienced after a relevant loss as a normal grieving process, however strange the symptoms may be.

However, it is important to note that grief processes are complicated situations in which adapting properly is usually not easy.

In this way, if an optimal adaptation is not achieved in those moments, the mourning can lead to an important psychological alteration.

In this line, many studies have shown how 16% of people who lose a family member develop depression during the following year.

In addition, these figures can increase up to 85% in the population over 60 years, so the relationship between mourning and depression can be very close.

Psychological and psychiatric treatments are generally discouraged in normal bereavement processes, but they are necessary in pathological duels and especially when mourning becomes a depression.

For this reason, it is very important to know well the characteristics and stages of normal grief, since this allows us to recognize which people are performing an adequate process and which people may be developing pathological functioning.

What are the phases of the duel?

The duration of normal grief is nowadays considered quite unpredictable, since the time period can vary widely in each person.

In this way, knowing when a grieving process has been completed is often complicated since no time periods are available that can accurately determine it.

Therefore, what are really relevant in the @nalysis of a grieving process are the different stages that are being experienced.

In this sense, the stages of mourning postulated in the model of Keble Ross are especially important as it allows examining what are the different situations that a person is living in a process of mourning.

The 5 phases of the duel are:

The first reaction to situations such as the information that a loved one has died or has an illness ends is to deny the reality of the facts.

The same can happen in other situations as the amorous ruptures, in which at first the predominant emotional reaction is the negation of the facts.

This denial that is experienced in the early stages of grieving processes consists in the conscious or unconscious rejection of the facts or the reality of the situation.

From psychology this first reaction is understood as a defense that seeks to cushion the shock or discomfort produced by reality at a time when the mind is not ready to accept it.

This first response lasts for a limited period of time in which we do not feel paralyzed, we experience a feeling of disbelief and we reaffirm things like “this cannot be happening to me”.

Likewise, it should be noted that denial is a very important stage in a grieving process as it allows us to protect ourselves from the first impact and gain a little time to gradually accept reality.

On the other hand it is important to be aware that despite the usefulness of this first stage, if the denial phase lasts a long time can be detrimental since it prevents the person to accept things as they are and face reality.

Subsequent to denial, when one begins to accept the reality of what happened, feelings of pain appear.

In the first moment the pain appears, the most prominent feelings are the feelings of anger, anger or anger.

Thus, even though these feelings may be present throughout the grieving process, it is in this second stage that they manifest themselves with greater intensity.

Anger can be directed toward the deceased, towards ourselves or towards other persons, objects, events, situations, etc.

Feelings of resentment are often felt towards people who have left us in a situation where pain and discomfort reign.

Actually, this first reaction can be considered as a selfish process, in which the person experiences feelings of anger due to the moment of discomfort that is touching him to live.

However, anger is a normal symptom in a grieving process.

Keble Ross comments as it is important at the moment that the relatives and friends of the person in mourning let him freely express his anger without judging or repressing his feelings.

Anger is a temporary response in the grieving process and necessary to work out the pain.

Likewise, using expression methods such as writing a letter to the deceased or establishing an imaginary dialogue with them can help channel these emotions.

This third phase consists of the last effort that the person makes to try to alleviate the psychological discomfort that is causing the loss.

It is often a very short phase in which the person tries to negotiate the pain he is experiencing to avoid the onset of depressive feelings.

In secret the mourner seeks to make a deal with God or another higher power so that his deceased loved one returns in exchange for a reformed lifestyle.

Negotiation is understood as a defense mechanism that alleviates the pain of reality but does not usually offer a sustainable solution over time and can lead to the experimentation of other feelings such as remorse or guilt.

During this third phase it is important that the person connect with other individuals and activities of the present, and perform activities more or less frequently that provide emotional stability.

This phase can be interpreted as the moment in which the confusion produced by the pain disappears and the person begins to understand the certainty of the loss.

The person feels sad and down, and experiences feelings like fear or uncertainty before the future of his life.

Also during this depressive phase can increase the preoccupation by facts that previously happened more or less unnoticed and the enjoyment of the activities that are realized usually is very complicated.

The pain in this fourth stage is very intense and you will experience feelings of emptiness and exhaustion. The person may be impatient with the constant perception of suffering and may be more irritable or susceptible than normal.

Also Read: 5 Side Effects of Antidepressants

Consider this fourth stage because it can be confused with a depressive episode with some ease.

However, although the person may feel that the pain he feels will last forever, in normal duels these feelings are not chronicled and, although their duration may be variable, this emotional response occurs during a delimited period of time.

Also, this phase of mourning is the most important when it comes to relating duels to depressive disorders, since if the depressive phase is not overcome, a depression may develop.

The appearance of this last phase is the indicator that the process of mourning has been normal and not pathological, and that this has reached its end.

In this way, after the depressive phase, the person makes peace with the loss and gives himself the opportunity to live despite the absence of the being or the situation lost.

Also Read: 5 Side Effects of Antidepressants

Thus, the person with the mourning comes to an acceptance of the situation thanks to the experimentation of depression.

This fact demonstrates that the depressive phase is of the utmost importance in the processes of mourning since, although they are highly distressing, the feelings that we experience at that stage are the main element that allows us to accept the loss.

On the other hand, it should be clarified that this phase does not mean that the person agrees to the loss but agrees to continue with his life despite the situation he has had to live.

The person learns to coexist with the loss, grows on a personal level through the knowledge of the feelings he has been experiencing and adapts to his new situation.

Thus, mourning is a complicated process but one that is often overcome if the time and space necessary to correctly elaborate the pain is reversed.