The disorder of stereotyped movements is a disorder that appears in childhood and adolescence in which the person makes movements of a peculiar nature and that interfere in the life of the person, and affect the personal and social environment.

To make it clearer what this disorder consists of, I give an example of a case of a girl.

Maria’s body is involved when it is excited by something. For example, at home, when she watches a movie she likes, she often rubs and wriggles her hands when she knows the part of the movie she likes will arrive, or sometimes extends her arms, straight in front of her and draws on her face in a happy grin, eyes wide open, full of happiness.

You can wring your hands, extend your fingers and grin dozens of times while watching the movie. But when someone asks what he is doing, he usually stops immediately. At school or in other environments where she is less relaxed and more aware of the reactions of others, she rarely rubs her hands or grimaces.

The definition that best fits what it implies is that of Sambraus, which defines them as repetitive movements, which seem impulsive, have a rhythmic character and lack an objective and purpose to which to go. They are individual and are presented temporarily, with a very transient or persistent variation.

However, the definition of stereotypies is not as simple as it seems as it can be confused with other movement disorders.

Returning to the human species, it is important to bear in mind that non-pathological stereotypies can occur for various reasons such as mimicry, social isolation, when there are no stimuli in the environment, when the person is frustrated, when excitement or joy occurs …

Many of these behaviors appear at specific moments of development, for example when the child reaches a new milestone in their development, such as learning to walk, saying their first word … These immature behaviors represent a step towards mature behavior, however When they last for a considerable time and acquire a pathological function, we speak of a greater degree of severity that affects the individual and produces discomfort. 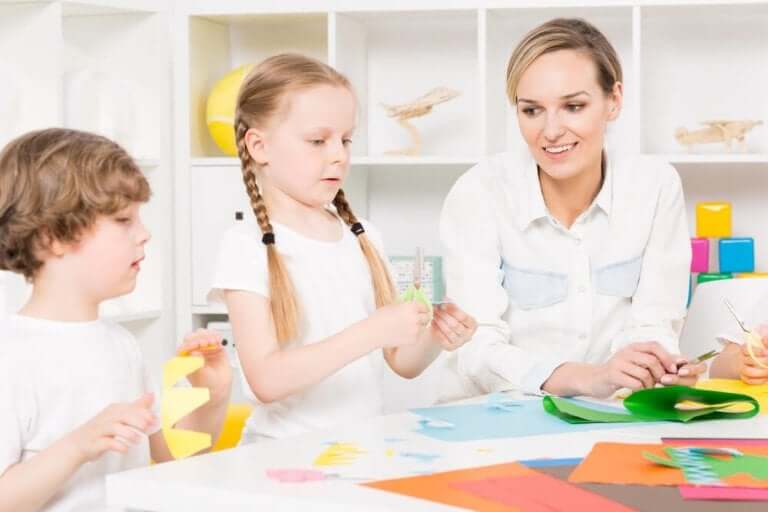 As for the theories that have tried to explain the subject we can refer to a biological theory, whose self-injurious and stereotyped behaviors are the consequence of biological factors, normal or altered.

And to a behavioral theory, where behaviors are classes of operated responses maintained by reinforcement. That is, the stereotypical behavior may indicate the presence of something that is stimulating, that is, the behavior may be a complement to any other action that the subject performs, for example to relax.

A more complex aspect to understand is the fact that self-harm behaviors are maintained. Some studies show that these can influence the release of endorphins in the brain (neurotransmitters responsible for pleasant sensations).

The disorder of stereotyped movements is classified in different categories according to the reference manual that we handle, CIE, DSM-IV-TR and DSM-5.

With respect to the International Classification of Diseases, CIE, classifies this disorder in behavior disorder and emotions of habitual onset in childhood and adolescence, under the name of stereotyped motor disorders. The diagnostic criteria in the ICD are stricter since the diagnosis of this disorder can not be made in the presence of any other disorder, with the exception of mental retardation. Another differential characteristic is that it requires a duration of one month of presence of stereotyped movements to diagnose the disorder.

With regard to the Manuel Diagnosis of Mental Illness in its version 4, DSM-IV, it places the disorder of stereotyped movements within disorders normally diagnosed for the first time in childhood and adolescence, in the category others.

Finally, the Diagnostic Manual of Mental Illnesses, in its version 5, the most recent one, since it was published in 2014, makes an important change as it goes on to name the disorders of onset in childhood, childhood or adolescence as disorders of neurodevelopment. And, in this case, the disorder of stereotyped movements is placed in a broad category called motor disorders along with others such as tic disorders and developmental disorder coordination.

With respect to the categories proposed by the DSM-5 to diagnose  stereotyped movement disorder , we find the following:

A criterion . Repetitive motor behavior, apparently guided and aimless (eg: shake or shake the hands, rock the body, hit the head, mooderse, beat your own body).

Criterion B . Repetitive motor behavior interferes with social, academic or other activities and can lead to self-harm.

Criterion C . It begins in the first phases of the development period.

Criterion D . Repetitive motor behavior can not be attributed to the physiological effects of a substance or neurological condition and is not better explained by another neurological or mental developmental disorder (eg, trichotillomania, obsessive-compulsive disorder).

It must also be specified if it is associated with a medical or genetic condition, a neurodevelopmental disorder or an environmental factor known as, for example, Lesh-Nyhan Syndrome, intellectual disability and intrauterine exposure to alcohol.

Finally, the DSM-5 adds a new dimension regarding gravity. Therefore it is allowed to classify this disorder as to whether it is mild, moderate or severe.

Self-injurious behavior varies in severity in different dimensions, such as frequency, impact on adaptive functioning and the severity of bodily injuries (from mild bruising due to hand blows against the body, through finger amputation to retinal detachment). blows to the head

Keep in mind that the presence of these stereotyped movements may indicate an undetected neurodevelopmental problem, especially in children 1 to 2 years of age.

The disorder of stereotyped movements, with or without self-injury, occurs in all races and cultures. In many, the presence of unusual behaviors are usually considered more normal, which can lead to a delayed diagnosis.

Stereotyped movements are often rhythmic movements of the head, hands or body without obvious adaptive function. These movements may or may not be stopped, in children with neurodevelopmental disorders it is more complicated that they can control these movements, although in some cases children use strategies such as sitting on their hands, wrapping arms in their clothes, or finding a protective object .

This varied repertoire of movements is particular to each individual. Here are some examples.

As for non-self-injurious stereotyped movements, include: rocking the body, fluttering or rotating movements of the hands, rapid movements of the fingers in front of the face, shake or flap the arms, as if they were birds and affirmative movements with the head .

With regard to self-injurious stereotyped movements can be: repetitive blows to the head, slap the face, biting the hands, lips or other parts of the body and put your fingers in the eye, particularly worrying because they also usually occur in children with deficiency visual. You can combine many movements such as tilting the head, rocking the torso, shake a string in front of the face repetitively.

Regarding aspects of frequency and duration, the DSM specifies that they can occur many times during the day or they can spend several weeks between epidodes. They can also last from a few seconds to several minutes.

The context in which they occur is also fundamental, since they tend to occur especially when the individual is involved in other activities, with all the attention placed on them or when he is excited by some event, stressed, fatigued or bored.

With regard to the prevalence of the disorder must be taken into account if they are simple or complex stereotyped movements.

The simple ones occur in organic brain disorders such as cortical atrophy and arteriosclerosis, and have a stimulating function. For example they are movements of scratching, rubbing or clapping. These movements are frequent in young children with normal development and may be involved in the acquisition of motor control.

The complexes are those that occur in psychiatric disorders, and are striking and bulky movements of hands and arms (touching and playing with objects, hair). For example, the rituals of obsessive-compulsive disorder are stereotyped acts. These movements occur in 3-4% of the population. In addition, between 4 and 16% of the subjects with intellectual disability, present stereotypes and self-injurious behaviors.

Studies find that the prevalence of headbutts are more prevalent in men, and self-injuries in women.

Regarding the beginning of the disorder, it is known that it usually appears in the first 3 years of life. Children who have complex motor stereotypes, approximately 80% show symptoms before 2 years of age, 12% between two and 3 years and 8% at 3 years or later. The movements reach their maximum in adolescence, and from this moment they can decline gradually.

In most children these movements reach their early resolution or are suppressed. However, in individuals with intellectual disabilities, stereotyped and self-injurious behaviors may persist for years, although typography or the pattern of self-harm may change.

Among the risk factors and prognosis of this disorder can be mentioned those related to the environment, or those genetic or physiological.

Regarding environmental issues, several studies have agreed that social isolation is a risk factor for self-stimulation, and this can lead to stereotyped movements with repetitive self-harm in the future. There is also an allusion to environmental stress and fear that may influence the triggering of these.

As for the genetic aspects, low cognitive functioning can generate these movements. That is why they appear frequently in intellectual disabilities such as Down syndrome. However, they are more frequent in those who have moderate, severe or profound intellectual disability. Self-injurious and repetitive behavior can be a behavioral phenotype in neurogenetic syndromes, such as Lesh-Nyhan syndrome, characterized by severe self-injuries.

As I mentioned earlier, stereotypies are a common manifestation of several neurogenetic disorders. When the stereotyped movements coexist with another medical condition, the two disorders will have to be codified.

Although this mental disorder is not as frequent as others that occur in childhood and adolescence, such as the presence of tics or learning difficulties, it is important to attend to these subjects, especially if the behaviors can become self-injurious.

Therapeutic interventions of conduct type, derived from operant conditioning, are proposed . These are aimed at the realization of alternative entertainment activities, or others that keep people occupied, or the reduction of stress to those who are subject by teaching problem-solving techniques.