The chromotherapy is an alternative therapy that applies light of different colors (different wavelengths) in patients with certain conditions, to alleviate their symptoms.

Today there are various techniques related to chromotherapy, such as the application of LED lights, chromium-puncture and photodynamic therapy, among others, with scientifically proven results.

Chromotherapy finds its origins in the ancient cultures of China, Greece and Egypt, approximately 4000 years before Christ.

Although it seems that Egyptian doctors were the pioneers in the use of color for healing purposes, in fact the Greeks were the first to  document both their theories and their chromotherapy practices.

In Heliopolis, the city of Ancient Egypt, there were many temples dedicated to healing, in which sunlight poured in its different  spectra, each color being used for a specific medical problem.

Paracelsus, a doctor of the Renaissance period, thought that light and colors played a very important role in human health and applied certain  chromotherapy techniques for the treatment of various diseases.

Modern science recognizes the value of light applied to health and many believe it is the medicine of the future. Albert Szent-Györgyi, discoverer of  vitamin C and winner of a Nobel Prize, has recognized how deeply we are affected by light and color. 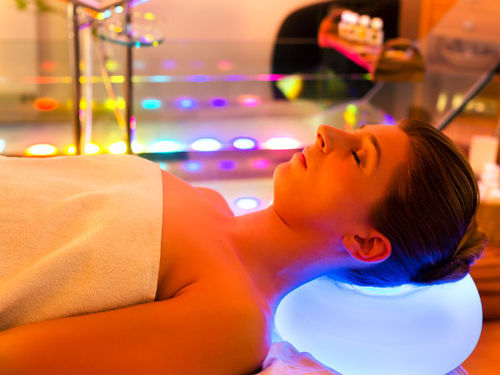 Later, in 1876, Dr August Pleasenton discovered the effects of colors on plants, animals and humans. A year later, Dr. Edwin Babbitt  wrote a complete theory about the healing power of colors.

But what we know today as chromotherapy is largely due to the work of Dr. Ghadiali, medical researcher, chemist and physicist, who created a  three-volume encyclopedia published in 1933, called “Encyclopedia of Spectrum-Chromium-Metrics” .

In said publication, this physician describes how colors are capable of curing diseases, describing the treatment for 316 different conditions.

The scientific and medical aspects of chromotherapy were explained in 1940 by Dr. Krakov, a Russian doctor who theoretically established the effects  of different colors on the sympathetic and parasympathetic nervous systems, theories that made possible a rapid development of photobiology and  chronobiology.

In 1958, Dr. Gerard discovered the psychotropic (psychoactive) effects of colors on mood and human behavior.

In 1970, NASA researchers studied the effects of LED lights and gave rise to photodynamic therapy, which today has many  applications that we will see later.

But for you to get an idea, red LED lights are able to reduce pain in patients with breast cancer who have undergone  radiation therapy.

The fundamental mechanism of the action of light and its electromagnetic fields on the various human physiological processes is based on the fact that the  different frequencies that produce colors can influence different molecules that are present in all the cells of the organism.

For example, DNA, RNA, different proteins (such as keratin, elastin and collagen), porphyrins and other molecules absorb the energy provided by colored light  and then release it, activating different mechanisms in this way, such as DNA replication, activation of enzymes, etc.

So you can think about how powerful this effect is, look at the following:

There are studies that show that the application of light of different colors (within the visible spectrum) is able to influence the secretion of hormones  and neurotransmitters, regulated by the hypothalamus.

Does this sound a bit strange to you?

As you have already read in the previous lines, there are several techniques that apply the principles of chromotherapy to relieve the symptoms of different  diseases.

These are some examples.

Chromium-puncture is a technique that is based on principles similar to those of acupuncture. It is about stimulating certain energetic points in the body,  only that instead of needles, a ray of light of a certain color is used, generated by a specialized team.

In a study carried out by Cuban doctors in 2003, 100 patients with asthma, allergies, skin disorders, among  other diseases were taken and chromotherapy was applied with a special device called Cromoter.

This equipment is capable of generating light rays in green, yellow, red, and also near infrared.

Before starting treatment, patients were evaluated according to the diagnostic criteria of traditional Asian medicine, to determine which  points needed to be stimulated.

Then, 15 sessions of daily treatment with Cromoter were carried out. The equipment was placed in direct contact with the skin, at the appropriate points, to  avoid losing light energy.

At the end of this first cycle of treatment, in 87% of the patients the reduction or elimination of the initial signs and symptoms was observed.

Undoubtedly, these are very encouraging results, although it should be noted that this study has no control group and therefore, has less validity from  the strictly scientific point of view.

This technique was developed in the last two decades, and is based on the fact that certain photosensitive chemical substances are able to identify  cancer cells and annihilate them.

These substances are injected into the bloodstream of the patient, who is then exposed to ultraviolet or infrared light, as needed. In this  way, photosensitive chemistries transform and destroy altered cells.

Thomas Dougherty, creator of photodynamic therapy, carried out an experimental study with 3000 patients who had different types of cancer,  obtaining very positive results.

So that you have a concrete example:

Photodynamic therapy is an effective treatment for certain skin cancers, such as superficial basal cell carcinoma, and is also useful for the  elimination of precancerous lesions.

To start the treatment, a cream containing methyl-aminolevulinate (a photo-sensitizing agent) is applied to the skin. The lesion is covered with a  dressing and 3 hours are expected.

Then the dressing is removed and the region is illuminated with a lamp that emits a special light, at a certain wavelength. This light activates the  porphyrins that are inside the cells, releasing a series of free radicals and initiating the elimination of the lesion to be treated.

Photodynamic therapy can also be very useful in the fight against infections. The ray of light acts on a photosensitive substance previously applied  and in the presence of oxygen, cytotoxic molecules are formed that eliminate the bacteria present in a wound, for example.

Photodynamic therapy has a great advantage: that it is doubly selective. The photosensitive agent is specific for a specific tissue or group of  cells and, in addition, the light can be directed specifically to the area in which the infection occurs.

Some experiments have already been carried out on animals, with very good results, and scientists believe that this technique is really very promising,  being able to even fight bacteria resistant to multiple antibiotics.

The application of LED light in different colors is also a chromotherapy technique with scientifically proven results for the treatment of  certain conditions.

The use of red light or near infrared spectra for the treatment of certain skin lesions and to rejuvenate the tissues of the dermis and  epidermis is a good example of this.

In one study, 30 people with wrinkles on their faces were taken, who underwent nine sessions of light treatment between 633 and  830 nanometers of wavelength (red and near infrared), using a device called Omnilux LED.

After 9 to 12 weeks of treatment, the presence of wrinkles on the skin of these people was evaluated. It was found that in 81% of the cases there were significant improvements  , especially in the wrinkles present in the skin around the eyes.

In conclusion, the combination of red and near infrared light is an effective method for photo-rejuvenation of the skin.

Another study also demonstrated the usefulness of this technique in accelerating the healing process in patients who had undergone  blepharoplasty and laser surgery in the tissues around their eyes.

The LLLT technique applies a low intensity laser light in order to modulate or stimulate the function of certain tissues.

This technique was described by Ohshiro and Calderhead in 1988, mentioning its possible effects of photo-bio-modulation or photo-activation, referring to  the changes that these lights can cause in cellular activity, at the molecular level.

Until the 1990s, phototherapy was dominated by lasers; although the LED lights already existed, it was not possible to generate LED lights at a specific wavelength  (color) constantly, so as to have a good clinical effect.

Everything changed in 1998, when NASA researchers developed stable and powerful LED light sources.

Nowadays, treatments that combine LLLT and LED lights, in wavelengths of 633 and 830 nanometers, have multiple applications, including  pain control of any etiology.

For example, treatment with LED lights at 830 nanometers (near infrared) is able to reduce acute and chronic pain in professional athletes.

It has also demonstrated its usefulness in the control of pain in cases of post-herpetic neuralgia and in the treatment of various dermatological conditions, such  as contact dermatitis and atopic rosacea, among others.

On the other hand, the LED lights in the blue spectra have an antibacterial effect that can be used to combat acne.

The blue light applied on the surface of the affected skin causes the release of free radicals that kill the acne-causing bacteria, Propionibacterium acnes, without damaging healthy skin.

Effect of color on human behavior

Research carried out in this area has shown that the colors of the environment can also influence the mood and  behavior of human beings.

For example, it is known that the color pink has a soothing, soothing effect, capable of suppressing aggressive and hostile attitudes even in criminal persons  deprived of liberty.

Apparently, if the environment that surrounds a person most of the time is pink, hostile attitudes tend to disappear.

On the contrary, the presence of the yellow color seems to have the opposite effect. The presence of this color in the lights of the streets  has been related to a greater occurrence of violent crimes.

According to what has been observed, warm colors are stimulating in people with depression or neurasthenia. On the other hand, cold colors  would have the opposite capacity.

Anxious people calm down, at least from a psychological point of view, when they are in environments with these colors.

Physiologically, all colors have tangible effects. Warm tones increase the respiratory rate, the frequency of blinking and the  conductance in the palm of the hand (due to the effect on the autonomic nervous system ).

As you see, colors can really influence our lives.

Therefore, chromotherapy can be a very useful treatment in various conditions, although it is still necessary to conduct more research in this regard.