The altruism is the principle or practice of worrying about the welfare of others. It is a traditional virtue of many cultures and a central concept of various religions.

The word was coined by the French philosopher Augusta Comte as altruism, as an antonym of egoism. He derived it from the Italian word altruism, derived from the Latin alter, which means “other people.”

Being altruistic means showing behaviors that do not benefit one, only other people. For example; volunteering to teach children, helping older people take care of themselves, helping a family member get by. 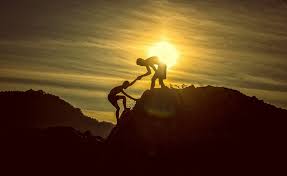 However, there is an open debate about whether altruistic behaviors are beneficial to the individual who performs them, since the person may be happier and feel more fulfilled in performing such behaviors.

In addition, important authors like Richard Dawkins propose that these behaviors, which do not seem to have benefits for the person who does it, are beneficial if we think in terms of species and much more if they are realized with people of the same family, since helping another person in your family is helping your own genes. I will explain this theory in depth below.

Why are people altruistic?

There are numerous theories that try to explain why we are altruistic. In the following I will try to make a brief summary of the most important theories according to the different currents and points of view.

According to this current, all prosaically behaviors (within which altruism is found) are learned through mechanisms of classical and operant conditioning.

This means that altruistic individuals are because, on previous occasions, when they have performed an altruistic behavior they have been reinforced, either by other people or by himself. I think it will be better understood with the following example:

According to the first definition of altruism this would be paradoxical because altruistic people are supposed to receive no benefit. But, as I explained above, it seems that this is not entirely true.

According to Bandera’s theory, reinforces who modulate behavior (in this case the altruistic) would begin to be external, that is, provided by other people and, as the person grows, the internal reinforces controlled by she herself.

This would happen in the following way, following the example above: John grows up, and his parents no longer thank him for helping his sister with homework, but he continues to help her because when he does feel smarter and likes to see his sister content.

Another form of learning, included within this stream, is vicarious or observational learning. That is, the person would learn by observing the behavior of other people and the consequences that it has. According to Bandera, much of the social behavior is learned in this way.

One model that is within this current is the Pilot and Davidic Reward and Activation Model. According to this model, people perform behaviors that maximize their rewards and minimize their costs. That is, the person will be altruistic if he foresees that the benefits of helping will be greater than those of doing nothing.

This model starts from the premise that for a person to help this one has to feel activated (in an unpleasant way) to know that another person has a problem. So it will help you no longer feel that activation.

The authors who developed this model attempted to predict whether a person would perform altruistic behavior and, if so, how. To do this they elaborated the following table:

The Cognitive current addresses altruism from a moral perspective. So the person will perform altruistic behaviors depending on whether he perceives that behavior to be morally correct or not.

One model that could be included both in this current and in the behaviorist is Daniel Batson, who maintains that the empathy we feel towards the other person is one of the main motivations that we use to carry out altruistic behaviors.

If we have a good relationship with the person who needs help, we will feel empathy and, therefore, feel bad when we see the other person suffering. So we would help the person not to feel bad ourselves.

This model is based on studies that have found that infants begin to perform prosaically behaviors by age 2, the same age with which they develop empathy.

In the following table you can see the reasons that would lead people to be altruistic depending on their level of morality.

But if altruism follows these rules, why is the same person altruistic sometimes and sometimes not altruistic? Researchers Bibb Lateen and John Darley asked this same question and developed a decision model on emergency intervention.

According to this model the decision on whether or not to help a person follows 5 steps:

In traditional psycho@nalytic theories altruistic contacts do not appear as such. According to this current, the humane being performs acts motivated by instincts and desires from birth and it will be society that will repress and control these impulses.

Later the person will internalize the social norms and form their own morality and participate in the reprimand and control of the acts of other people.

According to this current, people would perform altruistic behaviors to avoid the feeling of guilt, because they have a self-destructive tendency or to resolve internal conflicts.

Often we perform altruistic acts without even having thought about it before, without calculating it or planning it. We do it simply because we believe it must be done.

These altruistic behaviors are motivated by social norms. These norms tell us what we are expected to do, the expectations that society has.

The most important social norms in the study of altruistic behavior are the norm of reciprocity and of social responsibility.

Theories on the evolutionary sense of altruism

There are numerous studies that have found altruistic behaviors in several animal species.

In a study of chimpanzees it was shown that these showed altruistic behavior if another chimp ace asked for help.

The chimpanzees were placed in separate rooms communicated by a hole; each one was given a different test to get their food. To complete the test each chimpanzee needed the tool that the other chimpanzee had.

The researchers found that if one champak asked the other for the tool, it would help, even if the other chimpanzee had nothing to give.

You might think that chimpanzees are altruistic because they are very close (genetically speaking) to the human species, but there have been cases of altruistic behavior other species more distant to man, here are some examples:

As I mentioned earlier, Richer Dakin argues in his book The Selfish Gene that the main reason why individuals are altruistic is because genes are selfish.

Also Read: How to Be More Sociable: 15 Effective Tips

This would be a way of explaining why we are more altruistic with people in our family or similar to us (our country, our ethnicity …). And help individuals with higher reproductive potential (first to children and women, then adult men).

The researchers found that while the reinforcement system (limbic system) was activated whenever the person donated money, another area was specifically activated when donating had a cost to the volunteer.

This zone is the anterior area of ​​the prefrontal cortex and appears to be crucial for altruistic behavior.

Advantages of being altruistic

Many studies have shown that people who routinely practice altruistic behaviors, such as volunteers, exhibit higher indicators of happiness and well-being, both now and in the future.

For example, in a study comparing adults who had volunteered when they were young and others who had not been, the former were found to have higher indicators of satisfaction with life and lower depression, anxiety, and summarization (suffer physical symptoms due to psychological problems).

Other studies have also found that altruistic people have fewer physical problems and are longer-lived.