The addiction to video games is a problem of the present and that probably increases with the entrance of more technologies, like the virtual reality. In this article I will explain 6 of its consequences and how to deal with 6 tips

Have you ever wondered what video games have that catches so many children and teenagers? Have you ever felt that you cannot control the amount of time your kids spend on this entertainment? Today there are a lot of video games that seem to be addictive.

Children and youth spend many hours a day in front of the console, while their parents worry about non-studio hours or other activities, such as sports. 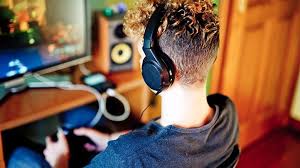 However, there are things you can do to avoid this situation. Read on to learn more about this type of addiction and how to avoid it or lessen its negative consequences.

Differences between addiction to video games and hobby

Now, what is the limit that separates the use of abuse?

When this limit is unknown, it is when the problem is generated.

Video games can be very entertaining and even didactic. Many stimulate abstract thinking, others implement fine motor skills and the list of benefits can be extensive.

However, when a child cannot “peel off” the console and spend long hours in this activity, then it stops being a game to become an addiction.

When a child has become an addict, just like any other addiction, he loses his freedom and his health is at risk.

Identifying the boundary between use and abuse

The holidays come and with them increase the amount of time the guys spend playing video games. But what is the time limit they should play to avoid addiction?

The Institute of Mental Health of Peru precisely released a statement on the matter.

It seeks to raise awareness among parents so that they control the time their children spend with video games. Limiting that time is key to preventing the game from becoming an addiction.

In general terms, it can be said that no child or adolescent should spend more than four hours a day playing on the console. If this time is exceeded, there may be some type of pathology involved.

How do you know if your teenager has become addicted to video games? If you notice that you have stopped caring about your food or even your personal hygiene, then the problem can be serious.

If you have children who spend many hours playing video games and see that they spend hours without saying they feel hungry, or if you talk to them and do not respond, then it is probably time to set limits.

In other cases and when the situation has already passed, signs of fatigue change in sleep schedules and even behavioral disorders may appear.

In the case that addiction is added to some type of disorder such as anxiety or depression, the picture becomes more serious.

Sometimes family or social problems can favor addiction. In such situations, professional intervention is necessary.

The worst 6 consequences of addiction to video games

As with any addiction, if your children fall into it, they lose freedom and their whole life can be disrupted.

Next we see how addiction to video games can alter a person’s life.

It is worth bearing in mind that adolescents are the most vulnerable population to suffer from this type of addiction.

1-Loss of the notion of time

If your child is addicted to video games, he can spend hours in front of the computer or mobile device without any sense of time.

When he cannot play, he only thinks about the moment he can do it again.

In extreme cases, addicts no longer know whether it is day or night. They can spend all night playing and sleep only when they no longer resist sleep.

The addict has as main focus of attention the computer / laptop, the Smartphone or the video game. As you go deeper into addiction, stop attending events with friends or family.

If you notice that your teenager is increasingly limiting his environment and invents excuses not to leave, he may be suffering the consequences of addiction.

The addicted kids study less, because the hours that I dedicated at home to the studio are now dedicated to the video game.

On the other hand, the quality of the time in the classroom is also inferior. Sleep and eating disorders have a negative impact on attention and concentration.

Thus begins a vicious circle, because when the first low marks arrive, the addict is demotivated. The lack of attention paid by the study is likely to decline further.

In some cases, teenagers addicted to video games end up abandoning their studies.

If you confront your child and raise the problems that addiction to video games is causing you, there will be arguments.

In other cases, the family does not know the problem and only notes that there have been changes in the behavior of your child, without knowing the reason.

If there is no good communication, this can cause distancing and misunderstanding.

If your child works, but has a flight addicted to video games, he may put his position at risk.

Alterations in sleep can affect work performance and addiction is capable of causing late arrivals and absences at work.

In addition to mental health, clearly distorted by addiction, the body also feels the consequences of it.

So much time of stillness and sedentary, generate conditions prone to obesity.

Problems like hypertension and heart disease are more frequent in children and adolescents who spend a lot of time with video games.

How to Avoid Video Game Addiction

The solution is not to eliminate or prohibit flatly video games. In fact and when a person does so within certain reasonable limits, playing video games can have certain benefits.

The problem is the extremes. The objective is always to be able to enjoy this activity and not be a slave to it.

If you are a parent of children or teenagers and you are concerned about a possible addiction problem with video games, we give you the following recommendations:

Explain clearly to your children what exactly the new rules will be about. The time to play will be limited.

It is even a good idea to explain to them the serious consequences that can occur if they play too long.

It is important that you do not give in to the protests and keep firm the rules you have proposed.

2-Do not use video games as a nanny

When you are tired, have little time or feel that your children get you out of the boxes, do not see yourself trying to entertain them with the console.

As an adult who sets limits to educating your children, your actions must be consistent with what you say.

If you let them play longer than set when it suits you, then you will not be respecting the limit. You cannot wait for your children to respect you.

To have moral property and to exercise full authority is to preach by example.

3-You are the owner of the console

In the family, each member has a role:

Adults are responsible for each one to fulfill theirs. In the specific case of the video game, you are the owner of the console, so you must control its use.

Think about the following:

Therefore, you must have control.

4-Regulate the purchase of video games

Always playing the same video game can be boring. Do not buy new games and prevent your children from doing so.

In this way, you will somehow be discouraging the use of the console.

If you are going to limit the time that your children are in front of the console, you can propose alternative activities for them to entertain themselves in their free time.

Sports, board games or activities such as drawing or painting can be very good ideas.

It’s also not bad that your kids get a little bored at first. Boredom can stimulate their imagination and can lead them to create new games or think about what new activities they would like to do.

In summary, to prevent your kids from becoming addicted to video games, you should limit the time they spend in front of the console and suggest other types of entertainment.

And always remember that the first person to respect this limit, you are yourself, no matter how much you help the video games to entertain your children while you rest.