The term anxiety neurosis was coined by Sigmund Freud to define periods of deep anxiety and high body tension.

In this article we will talk about the characteristics of this psychopathology, we will discuss its symptoms, its consequences and the therapeutic strategies that exist today to remedy this type of problems. 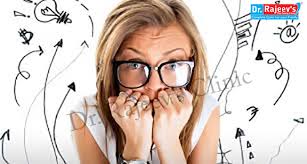 Before venturing to define the neurosis of anxiety, I would like to pause for a moment to explain what is meant by neurosis.

Surely, for many of us the term anxiety is a highly familiar concept and easily understood from the world of psychology and mental illness.

However, the term neurosis can be somewhat more ambiguous, being a word that is less and less used in modern clinical practice, a fact that causes this term to appear little in the recent psychological and psychiatric literature.

The term neurosis was proposed by the Scottish doctor William Cullen when referring to the sensory and motor disorders caused by diseases of the nervous system.

Thus, neurosis is the word used to refer to mental disorders that distort rational thinking and social functioning, family and proper work of people.

However, it should be noted that popularly the use of the word neurosis is usually something different, a fact that can cause confusion on some occasions.

In everyday usage, neurosis can be understood as synonymous with obsession, eccentricity, or nervousness.

Surely you’ve heard someone say, “There’s no remedy for this kid, he’s a neurotic.”

Within this phrase, it becomes clear how the word neurosis is being used to describe the person as someone who is obsessed with everything, is unable to think clearly and is permanently distressed by minor aspects.

It is true that this use of the word neurosis is not far from its professional meaning; however, it would be a mistake to equate neurosis with obsession.

And it is that in the professional practice, the term neurosis covers many more aspects than the simple obsession, since it refers to a mental disorder that is characterized by the presence of a very high level of anguish.

Thus, when we speak of neurosis, we are talking about a mental illness that is characterized by the presence of a high anxiety that causes a significant deterioration in the well-being and the functionality of the person.

What is anxiety neurosis?

Before the first description of neurosis realized by William Cullen, Sigmund Freud developed diverse works and elaborated a classification in which distinguished several types of neurosis.

Thus, we quickly see that the anxiety neurosis that concerns us in this article refers to a particular subtype of this disease.

Anxiety or anxiety neurosis can be defined as a state of high excitability that the patient himself expresses as an “anxious waiting” over which the subject elaborates dire future expectations based on symbolism.

At first glance, this definition postulated by Sigmund Freud can be very psycho@nalytic, somewhat bizarre and little applicable to reality or clinical practice.

However, the concept of anxiety neurosis is vital for understanding problems and anxiety disorders.

Thus, it seems opportune to define anxiety neurosis in a more intelligible, symptom-centered, and less focused on interpersonal processes of onset.

In this way, anxiety neurosis can be understood as a condition in which a person has episodes of intense fear or anxiety, suddenly and without any prior notice.

These episodes that are suffered in anxiety neurosis are known today as panic attacks, which can last from minutes to hours.

Likewise, they may occur only occasionally or may occur quite frequently.

So, today the term neurosis of anxiety is no longer used in clinical practice so if you have this problem and you go to a mental health specialist, in the diagnosis that provides you possibly does not appear the nomenclature of neurosis of anxiety.

Currently, instead of anxiety neurosis, a diagnosis of panic disorder or panic attack is usually used.

This fact can be explained by the fact that Freud’s classification of neurosis, despite providing a great deal of information and evidence on the characteristics of anxiety disorders, has now become obsolete.

What is a panic attack?

So far we have understood that anxiety neurosis is a special condition in which the person suffers a series of episodes of fear and / or extreme anxiety known as panic attacks.

So, let’s define what these panic attacks are and what sensations and symptoms have a person suffering this type of alterations.

The panic attack also known as panic disorder is a situation in which the person suffers a sudden crisis of intense anxiety by possessing extreme thoughts of fear and the irrefutable belief that something bad will happen.

This crisis begins suddenly, that is, the person is not able to recognize that he will suffer until he is already suffering.

Its duration can be variable, but it usually lasts for a few minutes and the maximum sensation of fear usually appears during the first 10-20 minutes. Some symptoms may last for an hour or even longer.

Because of their characteristics, the symptoms that this type of intense anxiety produces are often confused with a heart attack.

The main symptoms of a panic attack are:

Normally you do not usually experience all these symptoms at once, but you do suffer a significant part of them during the crisis of distress.

These symptoms are often experienced with much discomfort, extreme fear and extreme levels of anxiety.

Also, due to the great discomfort that originates and the unpredictability of appearance, people who suffer panic attacks live with apprehension the possibility of experiencing new crisis of distress.

Individuals with this disorder are constantly alert to this possibility and, despite the fact that doctors have ruled out the possibility of suffering from a medical illness, they continue to express great fear of suffering a new crisis that may end their life.

As expected, this state of activation and hyper vigilance in which people with panic disorder live, causes them great interference in  their day to day.

The person with anguish will find it very difficult to be calm, not think about the possibility of suffering a new crisis, will feel constant discomfort  and their normal behavior will be greatly interfered.

What are the diagnostic criteria for a panic attack?

In order to categorize this specific type of anxiety as a panic attack, the following characteristics must be connoted:

Temporary and isolated appearance of intense fear or discomfort, accompanied by four (or more) of the following symptoms, which begin abruptly and reach their maximum expression in the first 10 minutes:

Despite its similarities to a heart attack, the possibility that the symptoms are caused by a medical illness or the consumption of chemicals is ruled out.

As we see, not all symptoms appear, since the presentation of 4 of the 13 commented, is enough to make the diagnosis. In addition, it is very important to demonstrate the absence of cardiac problems that may cause the episode.

What are its consequences?

The panic attack can present itself uniquely to especially stressful events. At that moment, the person can be overcome by the exigencies of the situation and experience this series of symptoms.

However, the problem begins when panic attacks begin to occur frequently and the person begins to live with apprehension the possibility of suffering new episodes.

In these situations, the person will live in a state in constant hyper vigilance and tension, and anxiety will become his habitual companion.

In addition, under these circumstances, it is quite common for the panic attack to be accompanied by the onset of a new disorder, agoraphobia.

Agoraphobia consists of experiencing extreme anxiety when you find yourself in places or situations where escape can be difficult and therefore, if you suffer from an unexpected anxiety crisis, you may not have help.

In this way, the person begins to restrict his behavior and the places where he remains due to the extreme fear of suffering some harm when he is not in safe place, reason why he ends up taking phobia to certain places or situations.

This disorder can be very disabling because the person may not want to leave the house or not attend usual places like workplaces, restaurants, typical streets of their area of ​​residence, and avoid entering vehicles or other closed places.

The goal of treatment for anxiety neurosis (panic attacks) is to help the sufferer to perform properly in their daily lives, to mitigate the symptoms of anxiety and to get their fears to interfere as little as possible in their day to day.

The most effective therapeutic strategy that exists today to combat this problem is to combine pharmacological treatment with psychotherapy.

As for drugs, the most commonly used are antidepressants Selective serotonin reuptake inhibitors (SSRIs), sedatives and, sometimes, anticonvulsants. These medications should always be administered under a doctor’s prescription.

Also Read: Acupuncture for Anxiety is it effective?

For its part, psychotherapy focuses on working distorted views on the possibility of suffering a panic attack and suffers extremely negative consequences.

The patient is taught to recognize his or her thoughts that cause panic and work together to be able to modify them and reduce the feeling of helplessness.