The Atelophobia is a type of specific phobia peculiar in which the person fears imperfection and, above all, be imperfect.

Unlike other phobias in which the feared element tend to be more specific objects or situations, in this case the element feared lies in the subjective interpretations of imperfection.

Read more: what is Atelophobia

Considering the characteristics of the feared element, atelophobia can constitute a much more serious and disabling type of phobia for the person who suffers it.

In this article we will talk about the symptoms of this special fear of being imperfect, we will explain its possible causes and we will discuss the treatments that can be performed. 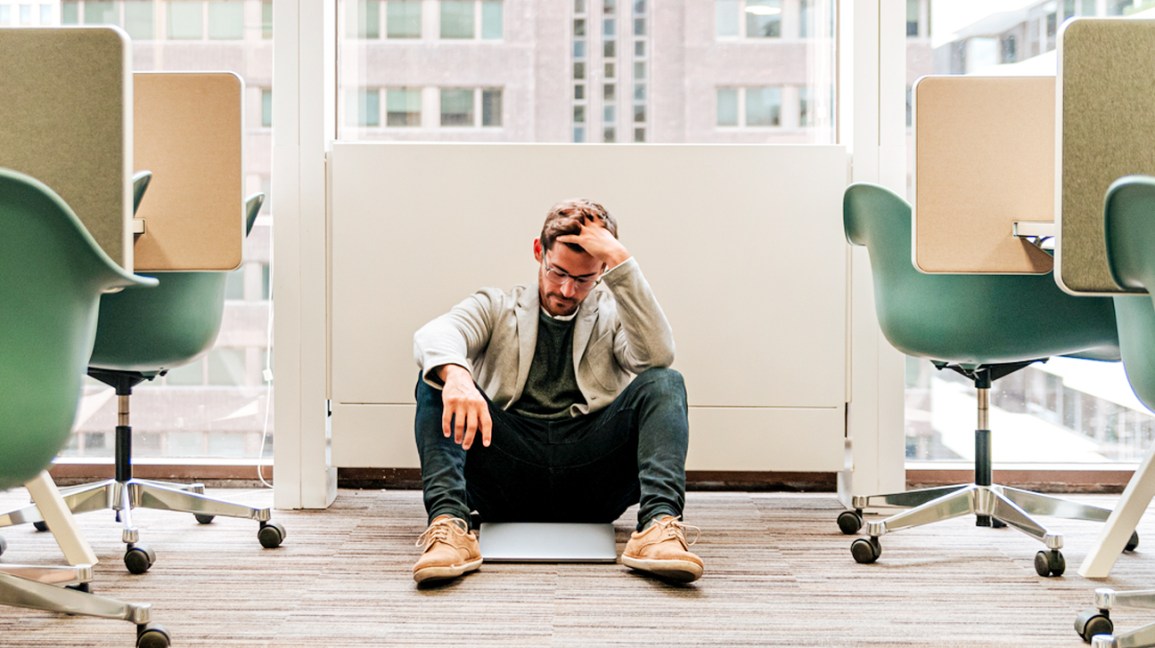 A specific type of phobia

Atelophobia can be a mental disorder difficult to diagnose and differentiate from other types of psychopathological disorders.

This fact lies in the characteristics of the feared object: imperfection.

The fact that a person is afraid of being too perfect can connote mental disorders referring to an obsessive and perfectionist personality, rather than an anxiety disorder.

Although cases of atelophobia may be associated, to a greater or lesser extent, with pathological personality traits, this disorder constitutes a specific anxiety disorder: the specific phobia.

Specific phobia constitutes a disorder characterized by the presence of clinically significant anxiety in response to exposure or specific feared objects, which usually results in avoidance behavior.

Thus, atelophobia is characterized by the presence of especially high reactions of anxiety when the person is exposed to thoughts of imperfection.

What is the feared element?

The phobic object of atelophobia is based on being imperfect or not being able to reach perfection in the actions, ideas or beliefs that are carried out.

Unlike another type of specific phobia such as spider phobia, the anxiety response does not appear when the person is exposed to a specific stimulus but can appear at any time when they have thoughts of imperfection.

However, the person with atelophobia will perform his phobic response at certain specific times.

For example, when the individual fails in something, does not do a task well or does something wrong, very likely make an anxiety response.

However, the idea of imperfection is totally subjective, so defining what situations cause phobia and what situations will not cause it is usually practically impossible.

In fact, the person with atelophobia can respond with anxiety to a situation that another person identifies as perfect and vice versa.

The only person who will be relatively able to detect which are the stimuli that can cause anxiety will be the subject who suffers from the anxiety disorder, since he will be the one who will have a greater ability to recognize his thoughts of imperfection.

What happens when a thought of imperfection appears?

The person with atelophobia experiences a disproportionate, irrational, involuntary and maladaptive fear of ideas of imperfection.

In this way, whenever an individual with this condition is exposed to a situation that gives rise to a thought of imperfection, he will respond with a state of high anxiety.

The anxiety reaction carried out in those moments will affect both the physical plane and the cognitive and behavioral plane of the person.

In the physiological plane, before the thought of imperfection, the individual will set in motion a whole set of phobic responses that are characterized by an increase in the activity of the central nervous system.

In the cognitive plane, the person will unfold a whole series of beliefs about the feared situation and about its capacity to face it.

Thoughts like that imperfection is inadmissible, that not being perfect will bring you many problems or that you will never be able to be well because it is not perfect they can come up easily.

Finally, as regards the behavioral level, the individual can begin to develop a series of behaviors that allow him to avoid the anxiety response and, therefore, the thoughts of imperfection.

What are the main consequences?

Because the element feared in atelophobia is a personal characteristic of the individual, this type of specific phobia can result in a greater number of negative consequences.

If we continue with the comparison of before, the consequences that can have to have phobia to the spiders are limited to avoid any situation in which an animal of this type can appear.

A priori, the affectation of this condition is minimal, since we have phobia to spiders or not, any person will choose to live in a medium in which the appearance of spiders is not very frequent.

In addition, achieving this goal is relatively easy, since fortunately, in most dwellings, spiders do not abound in corners.

However, in the case of atelophobia the thing changes, since the object feared and, therefore, what is intended to avoid is the appearance of thoughts of imperfection.

In this way, a person with this type of phobia can develop a certain functioning pattern guided by its main fear: imperfection.

The person with atelophobia can become very critical of anything he says or does, continually fearing all his actions since the things he does not do in a perfect way will cause him an extremely high anxiety response.

How can a person with atelophobia become?

The fear experienced by a person with atelophobia in any situation that may cause him to experience feelings, thoughts or feelings of failure can seriously affect his way of being and functioning.

The anxiety that is experienced every time that a thought of imperfection appears will originate in the individual a behavior destined to avoid that this type of thoughts appear.

In this way, the phobia itself can lead to a frank obsession to avoid feelings of failure.

The person can become very critical of anything, since he must be totally alert to any situation, action or circumstance that may reveal his imperfection.

As the element that most fears a person with atelophobia lies mainly in the appearance of thoughts of imperfection, their behavior and their pattern of operation will be based on avoiding any aspect that may cause it.

In other words, the person with atelophobia can adopt an operation that is totally focused on achieving perfection in any situation or action that he / she performs, even though this may be totally irrelevant.

It is very common for people with atelophobia to become extremely perfectionist, rigid, obsessive and self-demanding.

Most atelophobes measure their own competencies with the best, with the aim of being able to evaluate the perfection of each one of their personal spheres.

This means that they are continually trying to refine, redo or improve something that is already highly regarded by those around them.

This pattern of functioning usually causes problems in their personal relationships, in their work and family performance, and in the ability to integrate into society.

As we can see, these repercussions that the atelofobia has on the functioning pattern of the individual suffering from it respond to avoidance behaviors.

However, according to the qualities of the phobic stimulus (perfection), the avoidance is much more serious.

The person who has spider phobias will simply avoid being in contact with or near those animals he fears so much.

For an atelophobic person, avoiding his feared stimulus is practically impossible, so in attempts to avoid his phobia he can develop a maladaptive and pathological pattern of functioning.

What are its causes?

As in all specific phobias, it is postulated that the causes of atelophobia are divided between genetic components and learning components.

In this way, it seems that the environmental factors and the conditioning to which the person is exposed during their development can lead to the appearance of atelophobia.

Educational patterns marked by self-demand, perfection or rigidity can be important factors in the development of atelophobia.

Likewise, that parents have behavioral patterns marked by obsession, rigidity and intolerance to imperfection can also contribute to the development of an extreme fear of not being perfect.

Unlike other phobias, atelophobia can be closely linked to the preparation of a specific personality type.

Thus, the phobia of imperfection can be interpreted from a simple phobic response or from a behavioral pattern, a particular way of being and personality type.

This fact can be reflected in the repercussions of the disorder, that is, in the functioning caused by having a phobia of imperfection.

However, it is also difficult to define what is the genesis of the pathology.

So far we have seen that atelophobia causes a series of changes in behavior and way of being.

However, we have also commented how a particular way of being and a certain personality can make the person suffer from atophobia.

In this way, it is relevant to ask ourselves what is the cause of each one of the factors.

Raising this question can resemble a little to ask the question what was the chicken or the egg before?

Thus, although atophobia is interpreted as an anxiety disorder in which the phobic response is the main element of treatment, it is usually interesting to evaluate the role played by the obsessive and perfectionist personality traits in the presented symptomatology.

Typically, atelophobia is interpreted as an anxiety disorder. Although personality factors have certainly been involved in the development of the pathology, it is beneficial to direct the treatment towards the anxiety response.

However, although it is argued that the remission of atelophobia can “soften” the maladaptive personality patterns, these should also be taken into account since they can hinder or oblige to modify the treatment.

The first treatment option of atelophobia lies in those interventions indicated for specific phobias.

Thus, psychotherapy aimed at relaxing and exposing the person to their feared situations, that is, to the ideas of imperfection, constitute the treatment of choice.

It is argued that if the phobic response can be remitted through habituation to the ideas of imperfection, the person will be able to stop performing their avoidance behaviors and, therefore, remit their obsessive, rigid and perfectionist behavior.

However, this type of phobia can often cause more problems in their treatment.

Especially in those cases in which the obsessive and perfectionist personality is especially marked, the techniques of exposure and relaxation may not be sufficient, since the individual may remain committed to functioning in a certain way.

Personality alterations tend to be more difficult to treat. In these cases, despite the fact that phobia treatment should not be abandoned, it is usually necessary to incorporate other treatments such as cognitive therapy or pharmacological interventions.