Piaget’s theory proposes that the cognitive development of the child  occurs in four general stages or qualitatively different universal periods. Each stage arises when an imbalance occurs in the child’s mind and the child must adapt by learning to think differently.

The method that Piaget used to find out how children’s thinking worked was based on the observation and formulation of flexible questions insisting on the answers. For example, he observed how a four-year-old child believed that, if coins or flowers were placed in a row, they were more numerous than if they were grouped together. Many of the initial studies he did were done with his children. 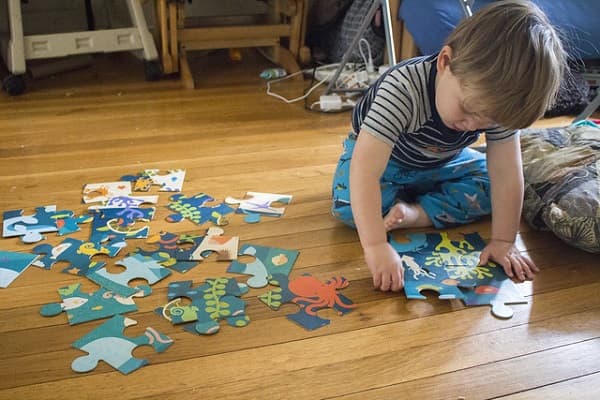 His theory, one of the richest and most elaborated in the field of psychology, is framed within the cognitive-evolutionary models.

These models are rooted in the writings that Jean-Jacques Rousseau developed in the eighteenth century. From here it was suggested that human development took place with little or no influence of the environment although at the moment they place more emphasis on the environment. The main idea is that a child will behave based on the development and organization of their knowledge or intelligence.

Piaget formulates his theory of cognitive stages based on the consideration of development from an organicist perspective, that is, he states that children make efforts to try to understand and act in their world. This theory caused a cognitive revolution at that time.

According to this author, the human being acts when he comes into contact with the environment. The actions performed in it are organized in schemes that coordinate physical and mental actions.

There is an evolution from the mere reflexes to sensorimotor schemes and later to operational structures, of a more intentional, conscious and generalizable nature.

These structures represent a way of actively organizing reality through actions or through the functions of the functions of assimilation or accommodation to new situations to find the balance that responds to the demands of the environment.

The functions and structures

Human development could be described in terms of functions and cognitive structures, trying to show that the structural and functional aspects of the mind were related to each other and that there was no structure without function or function without structure.

I also thought that cognitive development evolved progressively from lower stages to the functioning of reversible and formal mental structures.

This author thought that the child when related to his environment is conformed in this one a more accurate image of the world and develop strategies to manage. This growth is achieved thanks to three functions: organization, adaptation and equilibration.

For example, a bottle-fed baby that starts after sucking a glass shows assimilation since it uses a previous scheme to face a new situation. On the other hand, when he discovers that in order to suck the glass and drink water he has to move his tongue and mouth to suck, otherwise he is adjusting, that is, he is modifying the previous scheme.

Or for example a child that has associated with the concept dog, all those big dogs. One day he goes down the street and sees a mastiff, which is a dog that he had never seen before but that fits into his big dog scheme, then he assimilates it. However, another day is in the park and sees a child with a chihuahua, this dog is small, then you must modify your scheme adjusting.

Stages of the child’s cognitive development

Piaget proposed that the child’s cognitive development occurred in four general stages or qualitatively different universal periods. Each stage arises when an imbalance occurs in the child’s mind and the child must adapt by learning to think differently. Mental operations evolve from learning based on simple sensory and motor activities to abstract logical thinking.

In the following scheme appear the fundamental characteristics of these periods.

The initial schemes of the child are simple reflexes, and gradually some disappear, others remain unalterable and others combine into broader and more flexible units of action.

Regarding the primary, secondary and tertiary reactions, to say that the former suppose the improvement of sensorimotor schemes based on the primitive reflexes that go from being a reflex activity to being a self-generated activity in a more conscious way. For example, the child who sucks his thumb and repeats it because he likes the sensation.

Secondary reactions are due to the repetition of actions that are reinforced by external events. That is, if a child has seen that by shaking a rattle, it makes a noise, will shake it again to hear it again, first it will do so slowly and hesitantly, but will end up repeating it firmly.

In tertiary circular reactions the child acquires the ability to create new sequences of behaviors to deal with new situations. That is, the child repeats those actions that he finds interesting. An example would be that child who observes that when he shakes the rattle it sounds differently than when he picks it up and hits the ground.

At the end of this stage the child is already able to have mental representations that allow him to free himself from his own actions. And they develop the deferred imitation, which is that which occurs even if the model is not present.

This stage is characterized because the child begins to use symbols to represent the world in a cognitive way. The symbolic function is manifested in imitation, symbolic play, drawing and language.

Objects and events are replaced by words and numbers. In addition, the actions that previously had to be done physically can now be done mentally, by means of internal symbols.

The child in this stage does not yet have the capacity to solve symbolic problems, and there are various gaps and confusions in his attempts to understand the world.

The thought is still dominated by the perceptive aspects of the problems, by the tendency to focus on a single aspect (centering), by its invariability and inability to make transformations and by the use of transductive reasoning (the child goes from the particular to the the particular).

The fundamental novelty that occurs in this stage is the emergence of operational thinking, based on the use of operations. That is to say, an internalized action (unlike the sensorimotor, which were external and observable), reversible, which is integrated into an overall structure.

The understanding of reversibility is one of the fundamental features of the operation. It is based on two rules: investment and compensation.

The investment guarantees that transformations that occur in one direction can also be made in the opposite direction. And the compensation is the realization of a new operation that cancels or compensates the effects of a transformation.

In this stage, children are already capable of performing mental operations with the knowledge they possess, that is, they can perform mathematical operations such as adding, subtracting, ordering and investing, and so on. These mental operations allow a type of resolution of logical problems that were not possible during the preoperative stage.

As examples of logical-mathematical operations we find conservation, classifications, serializations and the concept of number.

Conservation consists in understanding that the quantitative relationships between two elements remain unchanged and are conserved, even though some transformation may occur in some of the elements. Example: the child learns that a ball of plasticine is still the same in its rounded shape as elongated. And not to be elongated is greater than the rounded shape.

The classifications refer to the similar relationships that occur between the elements that belong to a group.

Serializations consist of the order of the elements according to their increasing or decreasing dimensions.

The concept of number is based on the previous two. It occurs when the person understands that number 4 includes 3, 2 and 1.

This includes all those operations that require a higher level of abstraction, and that do not require concrete or material objects. As examples we can talk about the ability to deal with events or relationships that are only possible in opposition to what really exists.

The characteristics of this formal thought are the following. The teenager appreciates the difference between the real world and the possible one. When you encounter a problem you can pose a multitude of possible solutions trying to discover which are the most appropriate.

In addition, hypothetical deductive thinking appears, this consists of the use of a strategy consisting of the formulation of a set of possible explanations and then the submission of these approves to check if they occur. And finally, it is able to integrate the two types of reversibility that practiced in an isolated way, investment and compensation.

According to some authors, Piaget underestimated the abilities of infants and young children and some psychologists questioned their stages and provided evidence that cognitive development was more gradual and continuous.

In addition, they assure that, in reality, children’s cognitive processes would be linked to the specific content (in what they think), to the context of the problem and to the information and ideas that a culture considers important.

In response to these criticisms, Piaget reformulated his postulates and ensured that all normal subjects arrive at formal operations and structures, between 11-12 and 14-15 years, and in all cases between 15 and 20 years.