Something as simple and daily as eating three times a day, get up more or less always at the same time or that we are more active at a certain time of the day responds to a network of very complex somatic interactions called biological rhythm.

Background of interest in biorhythms

The study of this phenomenon; that is, the periodicity of many physiological aspects, caught the attention of doctors and philosophers of antiquity. Especially of Galen and Aristotle, who attributed biorhythms to the action of the environment: the subject is susceptible only to external factors (for example, sunset to sleep) and is considered a passive agent of the environment.

It was not until the nineteenth century when all astronomical explanation was discarded and it began to be suggested that there are endogenous factors (see hormonal) that influence the biorhythms of living organisms. We’ll talk about hormonal factors later, but you’ve probably heard about the famous melatonin in sleeping pills format.

The question of biorhythms had its peak with those known as biorhythmists at the end of the eighteenth century and throughout the nineteenth century. As a curiosity, the Berlin doctor Wilhelm Fliess (who, incidentally, was a patient of Freud ) observed that many patterns (including births and deaths) occur at intervals of 23 and 28 days.

Later, at the University of Innsbruck it was observed that the “lucky days” of the students took place every 33 days and came to associate it with a supposed cyclic capacity of learning of the brain, which absorbed the knowledge better every certain period of time.

Of course, all this has been relegated to an anecdotal level and today the subject of biorhythms is approached from a positivist perspective and from the assumptions of science, which will be what we will deal with in the following paragraphs.

We can advance, however, a more scientific view of this phenomenon: the one that supports that our brain function fulfills cycles of approximately 90 minutes, coinciding with what is known as the paradoxical dream or REM (for example, there is a decrease in the concentration of 90 minutes of studying). 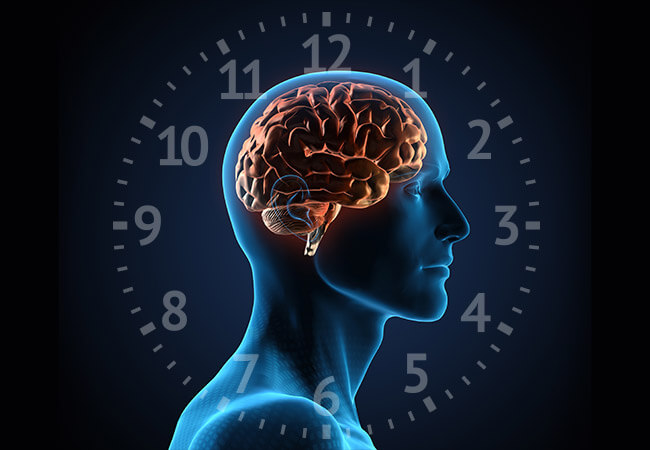 Etymologically, this word finds its Latin origin in circa- (around) and -dies (day), therefore we can deduce that circadian rhythms are those physiological oscillations that occur approximately every 24 hours.

A good example of this would be the need for sleep. Under normal conditions, the dream comes to us practically at the same time of the day following a marked pattern. Any alteration of this pattern leads to disorders such as insomnia.

It is not surprising, by the way, that our “internal clock” is regulated by daylight and by a schedule and that if it is disrupted appear such annoying disorders as jet lag, which is neither more nor less than an alteration of our circadian rhythm and one more proof that we are regulated, in part, by the daylight hours we have per day.

In addition to the mentioned insomnia, in Psychopathology there are also alterations that make up circadian rhythms. For example, people who suffer from severe depression are worse throughout the morning (worsening morning) and improve in the afternoon.

In fact, one of the first symptoms that patients with depression manifest are the so-called rhythm disorders, or disorders of biological rhythms, usually identified in clinical psychology as appetite deficit, sexual desire and sleep.

Are those whose duration or cyclicity is greater than 24 hours. They are named like this (infra-means less in Latin) because they occur less than once a day. This, which can be complicated, is easier to see if we give examples of it.

The menstrual cycles clearly illustrate this phenomenon occur approximately every 28 days. Tides and lunar phases also correspond to infradian rhythms, also following a pattern of between 24 and 28 days.

That is why the menstrual period is sometimes referred to as a circalunar rhythm; However, the scientific evidence does not really lead to consider it as such with a solid base.

This is due to the fact that many factors of modern life (the use of curtains that do not allow light to pass, to find ourselves working in an environment with artificial light, etc.) do not allow a synchronization of the rhythms of women with the lunar cycle. .

Another curious infradian phenomenon is the fact that some species of insects, such as the lion ants, excavate wells and anthills of higher quality and deeper when there is a full moon (Goodenough, 1993)

Another good example can be the migration of birds or any similar phenomenon that occurs on a seasonal basis.

Applying it again to the field of Psychopathology, depressions and other mood disorders usually get worse in the spring and, sometimes, in the dawn of autumn. Bipolarity is also related to seasonal worsening.

Are those that take place in a period of less than 24 hours; that is, they occur more than once a day (ultra- means greater in Latin). There are numerous ultradian rhythms such as, for example, the beating of the heart, the blinking of the eyes, the regulation of body temperature or breathing.

Other ultradian rhythms can be REM sleep cycles (which occur every 90 minutes or so) or the search for food in animals.

Now that we have seen the importance of maintaining homeostasis or balance in our body, it is time to discuss the endogenous factors that are involved in the control of our internal clock.

To situate ourselves a bit more, it is said that biorhythms are endogenous (they are controlled by internal signals from our body) but are regulated by synchronizers, such as the hours of light mentioned above. The changes of light and darkness keep our clock adjusted.

It is a hormone found in animals, plants and fungi and its fluctuations vary according to the time of day and the lighting of the moment. It is found mainly in the pineal gland, located in the suprachiasmatic nucleus of the brain, and exposed and identifiable to the eye in some reptiles (also called “the third eye” for that reason)

If we remove this nucleus under experimental conditions, we will observe that the animals do not show any circadian rhythm, showing numerous disorders, especially sleep-wakefulness.

Melatonin, which can be found without a prescription in any supermarket or parapharmacy, is being used in the past as a treatment for insomnia and to replace benzodiazepines (drugs finished in -pam).

It is a sterold hormone (such as testosterone) that is released especially in situations of stress and whose average life in the body is approximately 90 minutes.

A prolonged exposure to stressful events causes the continued release of cortisol, which leads to a high probability of suffering from rhythm disorders.

This hormone is responsible for ovulation, which takes place in the middle of the menstrual cycle approximately every 13-15 days. It follows a cyclical pattern and is key for menstruation to occur normally every 24-28 days.

In addition to being in synergy with LH in the infradian cycles of women, FSH causes maturation in puberty of both men and women, as well as development and growth. In men it is also involved in the production of sperm.

We have already seen the importance of the cycles in our organism and in that of other species. However, the current rhythm of life prevents us on many occasions from giving our body the biorhythm it needs to adjust both internally and externally.

It is also true that many people (obviating those who, due to work reasons, have to work a night shift) are more nocturnal than daytime; that is, they are more active during the night, and surely we know someone whose performance is higher during the early morning hours.

This of course is not harmful per se as long as we try to meet that schedule on a regular basis so as not to go “crazy” to our body or internal clock. Remember that our body adjusts in normal conditions to circadian rhythms of approximately 24 hours of biological duration.

At this point, we should talk about how to maintain a daily routine that allows us to have an internal clock with a mechanism as purified as one made in Switzerland. There are some tips that, if we meet them, we will surely notice an improvement in our vitality and performance.

The importance of maintaining a daily routine as part of a good synchronization of our biorhythms is especially relevant if we want to maintain both physical and mental health in an optimal state.

Besides that our organism will thank us, at the level of self-realization we will notice the results as soon as we notice that our productivity and efficiency are affected.

Finally, and as we said, discipline is essential in this journey that involves caring and respecting us, where maintaining a healthy routine can be a good starting point.