The stress can fatten in some people due to changes in the neuroendocrine system that cause increased appetite. In addition to the release of hormones such as adrenaline, corticotrophin or cortical, in the stress can be learned behaviors such as ingesting food constantly.

“Stress” is a term used in a generalized and colloquial way by most people to refer to a state of anxiety, to what we feel when we are overwhelmed with having many tasks and little time to carry them out.

The popular term was coined in 1936 by Hans Sale, a physiologist and Austro-Hungarian physician, who defined stress as “a nonspecific response of the organism to any demand for change.”

Any stimulus that poses a challenge or threat to our well-being may be a state of stress. Stressors, which are the stimuli that cause stress, can be both physical and psychological or emotional.

For example, we may feel stressed in a situation that is difficult for us to predict or control, such as a first date, a job interview, or an exam time. Other stressors can be loud noises, excessive cold or heat, an unpleasant person…

What happens in the body when we have stress?

Faced with a stimulus that may pose a threat (real or perceived) to our organism, our brain is biologically prepared to make a very quick decision: to fight or to flee.

This mechanism has been inscribed in the human species since the beginning of time, when man lived in a hostile environment, full of dangers. The human brain was developed so that when prehistoric man encountered an animal that could harm him; he would quickly assess the risks to unconsciously decide whether it was more convenient for his survival to fight with the animal or to flee from it.

To achieve the necessary resources to make this decision and flee or fight effectively, many bodily functions, such as digestion, slow down and chemical changes are seen in the body. Our body produces higher amounts of the hormone cortical, the heart rate increases, the muscles tighten, the alertness increases and the breathing becomes faster.

This response, which is so old in our species, is still present today, when, in fact, the kind of danger that it required to be developed is no longer frequent.

Does it put stress on you?

While the immediate response to a stressor may be loss of appetite, for some people, chronic stress may be linked to an increase in appetite, which in turn leads to weight gain. The problem is caused by our neuroendocrine system, which connects the brain to the rest of the body in a way that helped our ancestors survive, but not us.

One of the hormones released in times of stress is adrenaline, which gives immediate energy, along with corticotrophin releasing hormone (CRH) and cortical. A high level of adrenaline and CRH in the body temporarily decreases appetite, but these effects do not last long.

The cortical, for its part, serves to help the body recover after making the effort to fight or flee and stays much longer. At present, we do not actually fight or physically (escape) from situations that stress us, but cortical is released anyway, causing our body to “believe” that we need to recover lost calories and increase appetite. When stress is chronic, this can lead to significant weight gain.

In addition to the physiological motives just explained, eating more when we are under chronic stress can also be a learned behavior. In stressful situations, we have the urge to move, to do something, and eating is an activity that can be carried out quickly and comforting immediately. 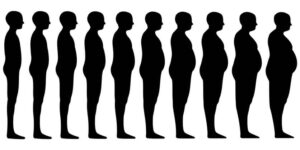 Do all people gain from stress?

However, long-term stress can lead to weight gain in some people and a decrease in weight in others. On the one hand, as we have seen, higher levels of cortical can increase food intake, but on the other hand, stress can inhibit appetite by activating the sympathetic nervous system.

Animal studies provide the opportunity to examine the effect of stress on food intake by controlling more factors than in human studies. In these investigations it has been generally seen that animals eat less when the intensity of the stressor is high, but when the intensity is reduced, they eat more.

Interactions between genes and environmental factors are also relevant in this subject. Stable differences between individuals can determine which pattern of reactions (gain weight, lose it or neither) would prevail for each individual under stressful conditions.

A field study, whose participants were middle-aged men and women who carried diaries of stress and daily food intake, identified three reactions to stress.

Some subjects ate more consistently during periods of stress, others are less, and there were subjects who did not see any changes in their stress-related eating patterns. Consistent with this, an investigation with university students found both a tendency to eat more reported by the same students and another to eat less during testing periods.

Some dimensions of personality have also been linked to a tendency to gain weight. It has been found that depressive symptoms, psychological stress and a low level of life satisfaction are more common among obese subjects than among normal weight subjects.

Stress, induced by negative life events, and depressive symptoms, has been identified as risk factors for short- and long-term weight gain. It has also been shown that obese subjects are more extroverted than normal weight control subjects, but no differences have been found in the neuroticism levels of both.

Most of these investigations, however, focus on stress associations with these short-term traits. A study published in the International Journal of Obesity (Karelia, Capri, Rosanne, Koskenvuo & Sorensen, 1998) aimed to examine whether certain personality variables predict a significant increase in weight during two relatively long follow-up periods (6 years and 15 years).

The main observations suggest that a higher level of stress at the beginning of the research predicts the greater weight gain in the following 6 years in men; a low level of vital satisfaction and a high score in neuroticism also tend to be risk factors for gaining weight in the following 6 years in older women; and higher levels of extroversion were associated with a lower risk of weight gain in young men. The majority of these discoveries, however, weakened along the longest follow – up (15 years).

Another study published in the International Journal of Obesity (Kivimäki, Head, Ferried, Shipley, Brunner, Vasteras & Marmot, 2006) studied the association between work-related stress and body mass index focusing on the following hypothesis: chronic stress at work may induce weight loss in some individuals and an increase in others.

The results suggest that if these individual differences are stable and accumulate over  time, it is likely that the tendency to gain weight when there are stressful situations is more common among people with a high body mass index,  while those with an index lower body masses tend to lose weight.

Other interactions between diet and stress

Continuing with the topic of losing weight, experts say that we should not go on a diet when we are under chronic or severe stress. In a study  published in the Journal of Clinical Nutrition in 2001, researchers at the University of British Columbia found that greatly limiting calorie intake  could produce a series of biochemical events in the body that would not only increase the level of stress but also could make  us feel more hungry.

The researchers studied 62 women for three days. Of this group, 33 were following a diet of 1500 calories daily, while the other 29 consumed about 2200 calories each day. After @nalyzing urine samples, it was found that women who had consumed less food had higher cortical levels.

Not surprisingly, these women also reported having had more stress during what researchers called “daily food-related experiences.” In short, the more they restricted their food, the higher their levels of stress-related hormones were, and the more they wanted to eat.

Tips for practicing: fighting stress and not getting fat

The effects of stress in our body need not be entirely unavoidable. Here are some recommendations that can help lower stress levels and maintain weight.