The dissociative identity disorder or multiple personalities characterized in that the person who has it can take up to 100 identities that coexist in your body and mind.

Another feature is that there is a memory loss that is too expensive to be explained by ordinary forgetfulness.

What is Dissociative Identity Disorder

The main feature of this disorder is that there are certain aspects of the person’s personality that are dissociated.

For this reason the name of “multiple personality disorder” was changed to “dissociative identity disorder” (TID).

It is therefore important to understand that there is fragmentation of identity, rather than a proliferation of separate personalities.

How do multiple personalities in dissociative identity disorder work?

The TID reflects a failure to integrate several aspects of identity, memories or consciousness into a multidimensional “I”.

Normally, a primary identity has the name of the person and is passive, depressive or dependent.

Dissociated identities or states are not mature personalities, but a disjointed identity. Different states or identities recall different aspects of autobiographical information, something favored by amnesia.

When changing from one personality to another, it is called “transition,” which is usually instantaneous and can be followed by physical changes.

The identity that usually requires treatment is the guest personality, while the original personality usually does so rarely.

Different personalities may have different roles to assist the person in coping with life events.

For example, the person may go to treatment with 2-4 alter egos and develop more than 10 as the treatment progresses. There have also been cases of people with more than 100 personalities.

Vital events and environmental changes produce change from one personality to another.

These are the main symptoms of TID:

People with TID are usually diagnosed with 5-7 co morbid (co-occurring) disorders, a higher rate than in other mental illnesses.

Due to similar symptoms, the differential diagnosis includes:

The persistence and consistency of identity behavior, amnesia, or susgestionability can help distinguish DID from other disorders.

In addition, it is important to distinguish TID from simulation in legal problems.

On the contrary, people with DID show confusion, discomfort and embarrassment about their symptoms and history.

People with TID properly perceive reality. They may have first-order symptoms of K. Schneider positive, although they lack the negative symptoms.

Differences between TID and schizophrenia

Schizophrenia and TID are often confused, although they are different.

People with schizophrenia do not have multiple personalities.

A common risk in patients with schizophrenia and DID is the tendency to have thoughts and suicidal behaviors, although they are more frequent in people with DID.

Most people with this disorder have been victims of some kind of traumatic abuse in childhood.

Some believe that because people with TID are easily hypnotizable, their symptoms are iatrogenic, that is, they have arisen in response to the therapist’s suggestions.

People with TID often report that they have suffered physical or sexual abuse during childhood.

Others report having suffered early losses from close people, serious mental illness or other traumatic events.

The memories and emotions of painful events can be blocked from consciousness and alternated between personalities.

On the other hand, what can develop in an adult as a posttraumatic stress; can develop in children like TID as a strategy of coping, due to the greater imagination.

It is believed that in order to develop TID in children, three main components have to be given: childhood abuse, disorganized attachment and lack of social support.

Other possible explanation is the lack of care in childhood combined with the innate inability of the child to dissociate memories or experiences of consciousness.

There is increasing evidence that dissociative disorders – including DID – are related to traumatic histories and specific neural mechanisms. 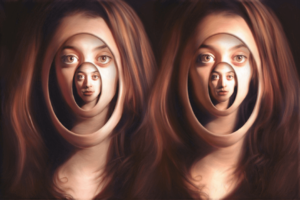 It has been hypothesized that PDD symptoms can be augmented by therapists who use techniques to retrieve memories – such as hypnosis – in suggestible people.

The sociocognitive model proposes that the TID is due to the person behaving consciously or unconsciously in ways promoted by cultural stereotypes. Therapists would provide signals from inappropriate techniques.

Advocates of this model note that TID symptoms are rarely present before intensive therapy.

There is a lack of general consensus in the diagnosis and treatment of DID.

Medication for co morbid conditions may be used to decrease certain symptoms.

Some behavioral therapists use behavioral treatments for an identity, and then use traditional therapy when a favorable response has been given.

Brief therapy can be complicated, as people with DID may have difficulty trusting the therapist and need more time to establish a trustworthy relationship.

It is more common the weekly contact, lasting more than a year, being very rare that it lasts weeks or months…

Different identities may appear throughout the therapy based on their ability to deal with specific situations or threats.

Some patients may initially have a large number of identities, although they may be reduced during treatment.

Identities may react differently to therapy, fearing that the therapist’s goal is to eliminate identity, especially that related to violent behavior.

An appropriate and realistic goal of treatment is to attempt to integrate adaptive responses into the structure of personality.

Brandt and colleagues undertook an investigation with 36 clinicians who treated DID and who recommended a treatment in three phases:

The International Society for the Study of Trauma and Dissociation has published guidelines for the treatment of DID in children and adolescents:

It is difficult to establish biological bases for DID, although research has been performed with positron emission tomography, CT scan of monophotonic emission or magnetic resonance imaging.

There is evidence that there are changes in visual parameters and amnesia between identities.

In addition, patients with DID appear to show deficiencies in attention control and memory recall tests.

DID occurs more commonly in young adults and decreases with age.

The International Society for the Study of Trauma and Dissociation states that the prevalence is between 1% and 3% in the general population, and between 1% and 5% in hospitalized patients in Europe and North America.

TID is diagnosed more frequently in North America than in the rest of the world and 3 to 9 times more in women.

How can you help if you are a relative?

The following family tips are recommended:

Little is known about the prognosis of people with DID.

However, it is rarely resolved without treatment, although the symptoms may vary over time.

On the other hand, people who have other co morbid disorders have a worse prognosis, as do those who remain in contact with abusers.